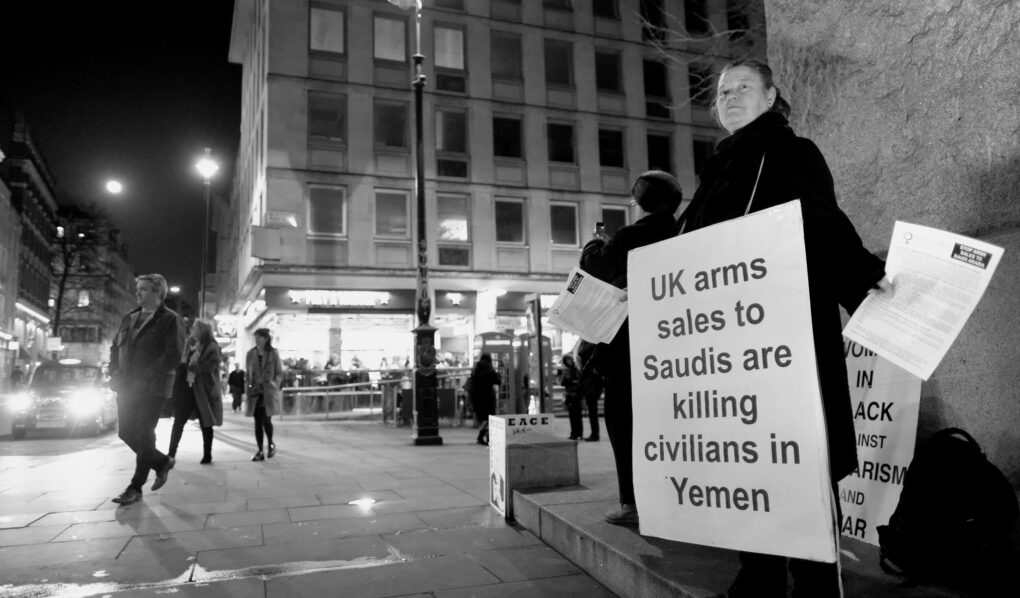 "Breaking the almost total silence on Britain's complicity in war crimes against Yemen." by alisdare1

Not long ago I shared someone’s post on Twitter about the untold suffering in Yemen showing a picture of a starving child. I asked why we seem to turn our backs on Yemen: “Look at this child in Yemen. Why is this shameful haunting war ignored time and again? Why is our MSM silent?” Someone replied, “Because we can’t absorb any more pain, heartache, frustration, helplessness and anger”. That feeling resonated with me. There is suffering all over the world, too much for us to bear and to begin to comprehend, but if this picture had come from the US, from almost anywhere in Western Europe, outrage would be expressed in so many of our media outlets.

War in Yemen and its impact

Yemen has had a troubled history, and the current state of affairs is a complex one. This paragraph contains merely a brief simplified outline of the situation there. The Yemen civil war, which continues to this day, started in 2014. It was sparked by Houthi Shiite rebels taking control of the capital Sana’a. The Houthis wanted to change the government and they demanded lower fuel prices. In 2015 they seized the President’s Palace, and the president, Abdrabbuh Mansur Hadi, and the government resigned. However, Saudi Arabia and Gulf State allies ensured that Yemen was economically isolated and they commenced airstrikes. The Saudis were supported by the United States. The ousted president was determined to return to power, but fighting continued and peace talks failed in 2016. A subsequent alliance between the Houthis and a former president, Ali Abdullah Saleh, broke down, and the conflict has continued. Saleh was later killed. The Houthis are supported by Iran, an enemy of the Saudis, and the division in the area is also one of Sunni versus Shiite. There are further complexities in the country, as there is a separatist movement in the south, the Southern Transitional Council, there is Al-Qaeda in the Arabian Peninsular and a branch of the Muslim Brotherhood, Al-Islah. The US, determined to root out Al-Qaeda in the area, is involved in counterterrorism operations in Yemen, with numerous airstrikes taking place.

The U.N. has called the situation in Yemen the world’s worst humanitarian crisis and believes 24 million people require urgent humanitarian assistance. Since this war began, more than 200,000 people are thought to have been killed and many left with serious injuries. 8.4 million people cannot rely on food supplies and there are 400,000 malnourished children. In all probability, a million people are suffering from cholera. Over half the people in Yemen are without basic healthcare. Two million civilians are internally displaced.

Yemen conflict all but ignored by the west

After 9/11, there was considerable news coverage of conflicts in Afghanistan, in Iraq and in Syria. Reports on the situation in Yemen have been fewer and less consistent, even though the level of suffering in Yemen has been devastating. Amnesty International has described it as ‘the forgotten war.’  When there is coverage, news outlets tend to concentrate on the angle of  ‘Sunni-majority Saudi Arabia versus the Shia Iran proxy war’ and do not consider the effect of the conflict on the people of Yemen.

Difficulties and dilemmas for journalists

One problem connected with reporting in Yemen concerns local journalists, who can be smeared by both sides in the conflict. Some local journalists have been accused of spying for the United States and, as a result, have been isolated from their communities. So journalists may try to avoid attacks from either side by making sure they keep a low profile, which may be the best way for them to ensure their safety.

Foreign journalists may face different obstacles, and obtaining access to cover the conflict can be difficult, which is one reason why coverage by the foreign press can be inconsistent. Journalists from overseas need permission from the Houthis in the north and the Saudi coalition in the south before they can enter Yemen. They too have to beware of putting themselves in danger.

Zainab Sultan pointed out in 2019 that certain stories coming from Yemen could attract more attention in the international press than others. One example was when, in October 2016, a funeral gathering in the capital was bombed and this resulted in 100 people being killed. A report in the New York Times of a starving seven-year-old child, Amal Hussain, led to protests in various parts of the globe. Unusually for Yemen, it was a front-page story.

External events can also affect the level of reporting. Yemen received more news coverage after the murder of Jamal Khashoggi in the Saudi consulate in Istanbul in October 2018. In America there was a greater awareness of Saudi behaviour, and the US Congress passed the War Powers Resolution Act. This was an act calling for American military involvement in the war in Yemen to come to an end. Unsurprisingly, President Trump exercised his veto. After this murder, the Saudis attempted to improve their standing on the world stage and issued more visas for US journalists to report in Yemen.

Maggie Michael, who won a Pulitzer Prize for her coverage of the war, says that ultimately the conflict reflects the essential dilemma faced by every journalist. Michael has explained that sometimes journalists have to work with the information they receive rather than information they can glean from their own observations. The Houthis issue more information about the humanitarian disaster caused by the conflict, and the Saudi forces and their allies release stories about child soldiers which they allege the Houthis are exploiting in their fighting force. The Saudis also do their best to refute information obtained about the torture that takes place in their prisons. Michael stated, in connection with the war in Yemen, but also in relation to journalism everywhere, “You are given different versions of the truth, and your job is to dig deep to reveal what it really is.”

The silence of American journalists

Matt TAIBBI, writing in Rolling Stone in 2019, also pointed out how sporadic news coverage in America has been. This may be largely due to the fact that America bears so much responsibility for the war. He cites an American doctor who stresses that the missiles, planes and tanks that kill in Yemen are American: “America is the whole thing.” The story is also neglected because, as is often the case when victims of war are non-white people living in poverty in a far away country, very little is said. As the war was backed by both Trump and Obama, neither the right wing nor the more left leaning press is likely to speak out. Furthermore, there is a reluctance to give too much publicity to the US alliance with the Saudis, given their record on human rights and the lucrative arms deals the US has with the Saudis. There is likely to be far greater news coverage of atrocities committed by US enemies.

An indication of the priorities of the US media is that, during a 12 month period in 2017 and 2018, MSNBC made no mention of Yemen but had 450 stories about Stormy Daniels. In America the media has focused more on domestic issues, possible corruption, the behaviour of members of government, intrigue and impeachment. Yemen is clearly of little consequence in the eyes of the press in the United States.

Parallels with other conflicts

There are parallels between the situation in Yemen and other international conflicts, such as that in Syria, another conflict that has developed into a proxy war where there is untold suffering. However, the situation in Syria has had more than seven times the amount of reporting than the situation in Yemen. Taibbi argues, “The narrative of Yemen is harder to spin for an American audience”. In Syria there is a clear enemy for the American audience, ISIS, and the war is justified as a battle of good against evil. And of course Assad is painted as an evil figure who needs to be opposed. In Yemen the situation is far more complicated, and the justification for US involvement is very weak. There is no clear enemy. The Houthis do not set out to kill American citizens, and there is no clear justification for the US to support the Saudis. Taibbi comments, “It is still hard to explain away the U.S.-armed, Saudi bombings of hospitals, public services, and civilians….The corporate media does not wish to offend its patriotic American viewers by unpacking the United States’ longstanding, distasteful relationship with a country like Saudi Arabia”.

Displaced Yemenis are not newsworthy

One international topic that has received some coverage is the exodus of displaced people from war zones, many refugees fleeing persecution and starvation. Again we can compare Yemen to Syria. In the eyes of the press, Yeomen does not produce refugees who are newsworthy, whereas those fleeing Syria are more noticeable and many thousands are to be found trying to reach the west, making them a news item. Of course much of the mainstream press is proving antagonistic to these courageous people, encouraging and fanning the flames of right wing hostility.

The priorities of our MSM exclude Yemen

As in the US, the UK media makes the decisions about the issues that we should focus on. Many people have barely heard of Yemen nor do they know where it is. It is ‘somewhere else’, not our concern. When people do have some knowledge, they can easily believe that it is a sectarian war which does not have anything to do with the UK. Consistent underreporting by the British media on the events in Yemen means that too many of us are unaware of both the heinous complicity of our own government, and of the disastrous humanitarian consequences which that complicity has wrought. Since 2015 the US and UK have  profited from selling in excess of $12 billion dollars of weapons to the Saudis. As in the US, our mainstream media is reluctant to challenge our government, which promotes and profits from the sale of weapons to the Saudis. MSM chooses the topics of news we receive, has priorities which do not seem to extend very often to reporting on some of the most outrageous suffering in the world and therefore does not tell us the truth about this forgotten war and our complicity in the horrors that continue to unfold four and a half thousand miles away.

2 thought on “Yemen – The Forgotten War”