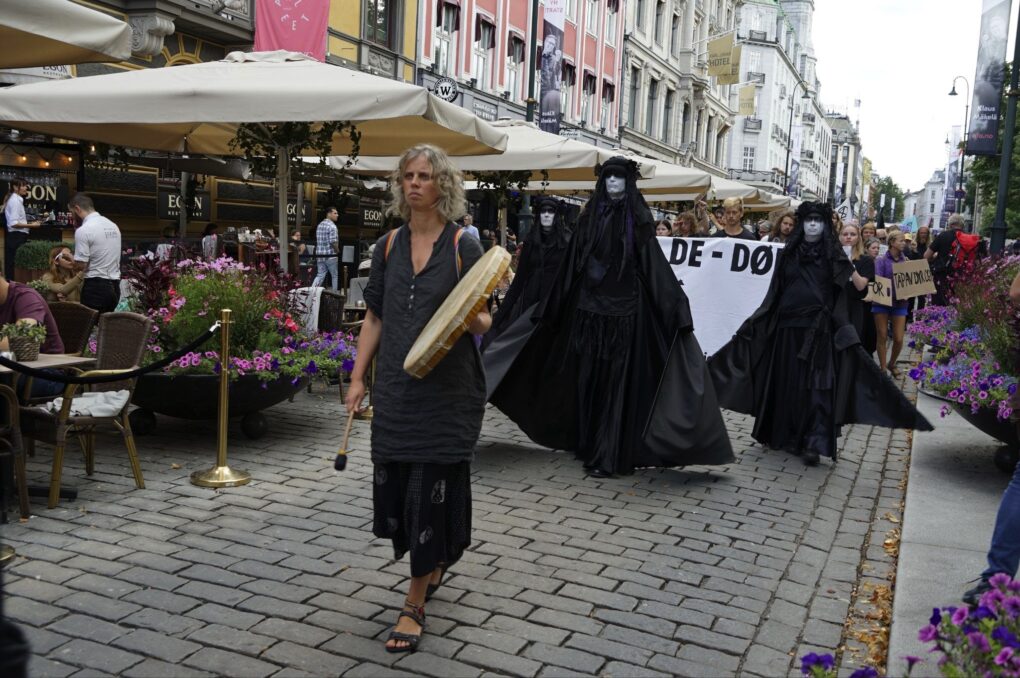 As Extinction Rebellion took to the streets in Berlin, Oslo and London, the mass media could only report on the press releases from a Tory MP and the Metropolitan Police. Over the past two weeks thousands of XR ‘rebels’ have taken part in demonstrations to highlight the lack of inter-governmental action on the climate and ecoligical crisis.

In Norway a small pink boat began a week of action taking on the giant Sture Oil terminal. According to XR, Norway is the word’s 7th biggest emitter of CO2, yet its government plans to extract North Sea Oil until at least 2070. XR Norway Youth occupied the lobby of the Ministry of Oil and Energy, demanding an end to oil exploration immediately.

Whilst the Minister for Oil did speak to them, he then told the media that the young protestors were trying to sidetrack democracy. After a stand-off lasting 6 hours, the police began handcuffing people, the youngest just 17, and arresting them.

Meanwhile in Berlin, ahead of the forthcoming German General Election, protestors gathered at the Brandenburg Gate, but were prevented by a huge police presence from carrying out larger plans. Protestors, dressed in red, paraded in front of the Food and Agricultural Ministry to present a key to reducing emissions to the German Parliament which read: transport change, agricultural change, energy change, construction change, consumption change, industrial change, constitutional change.

As reported previously in Critical Mass, protestors in the UK took to the streets of London to bring attention to the role the City of London’s financial institutions play in maintaining a system that is making the planet uninhabitable for the human species.

Deputy Assistant Commissioner Matt Twist of Scotland Yard accused the protestors of being “unfair, unreasonable and unlawful” as justification for arresting over 500 young people who desperately want to save the planet they rely on to survive. Is their action really any more unfair than a handful of very rich companies continuing to place their profits above other people’s ability to breathe fresh air? Is it any more unreasonable than Government ministers who, after receiving the United Nations Intergovernmental Panel on Climate Change (IPCC)report calling for rapid action, wrung their hands for 24 hours and then resumed business as usual?

Meanwhile Tory MP Lee Anderson came out of obscurity for 5 minutes to lambast Extinction Rebellion and to describe the policing as “a waste of police time and taxpayers’ money”. Critical Mass is not in the habit of agreeing with Tory nonentities but on this occasion we agree that rather than harass people trying to save the planet, police time would certainly be better spent arresting those who regularly break the law whilst polluting the atmosphere.

In 2020 the Court of Justice of the European Union ruled that the UK has “systematically and persistently” exceeded legal limits for dangerous nitrogen dioxide (NO2) since 2010 and has failed in its legal duty to put plans into place to tackle the problem. Of course, the UK Government promptly withdrew from the Court of Justice.So it seems that some laws, those which benefit the rich, are sacrosanct, and some, those that benefit those trying to create a better World, are open to interpretation.