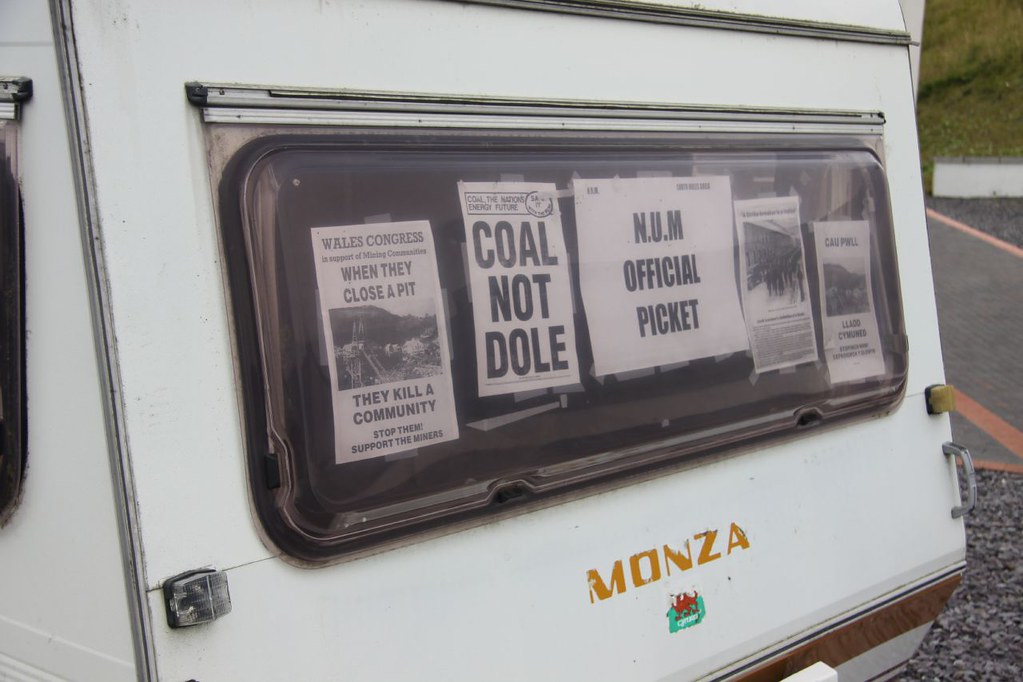 I thought I’d post this as a reflection on what happened in the 1980s when we had a Tory government determined to attack working people:

In 1984 I was a student at Essex University. When the Miners’ Strike started in March 1984, I was in my second year. Essex University in those days was ‘Red Essex’. In my first year, the Communists dominated the students’ union. By the second year, the ‘Broad Left’ had taken over. From what I can remember now this was an unholy alliance of Communists, Labour and Liberals. I was a part of the left opposition to this ruling clique. We consisted of non-aligned socialists, leftie Labourites, Troops Out, the SWP and anarchists.

Thatcher’s government pulled out all the stops to beat the miners, and the police were drafted in from all over the country to the front line, which was south Derbyshire and Nottinghamshire. Along with the cohorts of police – reputedly on £500 a week, in 1984! – came the army, who posed as policemen in unmarked uniforms, as well as Special Branch and all manner of spooks determined to break the strike (read GB84 by David Peace). It was a bloody battle, as close as we have come to civil war since the General Strike in the 1920s. Whole parts of the north Midlands and South Yorkshire were a ‘no go zone’ controlled by the police. Towns and mining villages were occupied. The police set up illegal roadblocks to try and stop the miners’ flying pickets.

So what has Essex University to do with this? Well, as the strike wore on, the government did its utmost to break it. Essex University is a campus university outside Colchester and near to the Essex port of Wivenhoe. The government started to ship coal in through Wivenhoe, and, soon after, flying pickets arrived at the university. There were about 300 in all, from as far afield as Yorkshire, Durham, Kent and South Wales. This was their first time at university and didn’t they, and we, enjoy it!

I spent many nights in that bar drinking with miners and they were some of the best nights of my life. Yes, we were separated by class – but so what? We all wanted the same thing – to beat Thatcher and bring down the Tory government. Nobody had any illusions about that. As a socialist it was nirvana. I felt privileged to be taking part in a struggle, however small a part that was, alongside the vanguard of the working class. And the miners enjoyed it too, for sure they had all left problems at home, but at Essex, they were welcomed with open arms, with beer, cigarettes, wacky baccy and friendly faces. So, all in all, it was an education for them and for us. But we got on like a house on fire. Even the Tories in the student body treated the miners with respect. They had very little choice.

All these goings-on didn’t impress the university – but those were different times. The student union was strong. We had won on a number of issues whilst I had been there. They took us seriously. And that was the best of the students’ union – we had our internal battles but they always backed their members – even the lefties like us – like a proper union should. It was very difficult, if not impossible, for the University to pick out and victimise a student there. So, although the university wanted to get rid of the miners – they couldn’t. The miners were there for the duration and once they arrived it wasn’t long before things began to hot up.

My best friend and I got hold of a couple of buckets, plastered ourselves in Coal not Dole stickers and got down to Colchester town centre every Saturday, collecting money for the miners. Colchester is a Tory and army garrison town so we got a fair amount of stick, as you can imagine. But we didn’t care. The best of it was we collected a fair amount. Many people gave us money. I would guess that on most Saturdays we collected between £30 and £50. Not bad money for those times.

There were a number of mass pickets of Wivenhoe and it’s a testament to the times how organised the enemy were. At the ‘big picket’, which I remember clearly, there must have been about 1,000 police officers and 1,000 pickets. The picket consisted of miners, students and local ne’er do wells (local people who supported the cause). We were up at 5 a.m. that morning to get to the picket in good time.

As the whole thing got off the ground, Nigel and I were at the centre of the picket near the gate. I remember quite clearly a wagon coming in – regardless of the pickets – someone could easily have been killed. It was slowed by the crush of bodies at the gate and Nigel jumped up and managed to stick his head through the driver’s window giving him a load of abuse. He was grabbed and carted off by several police officers. There was lots of pushing and shoving as the police tried to keep us away from the gates. The pickets linked arms and the mêlée swayed backwards and forwards. I led a charmed life that day. At one stage the police lifted the guys on either side of me but I survived. I guess that is because they were burly miners and I was a weedy student. The police grabbed a friend who was already on bail for an ‘offence’ committed during the strike and a frantic tug of war over him ensued. We knew he couldn’t be nicked again. With a gargantuan effort, we wrested him from the police and he was passed back along the ground through the legs of the pickets to safety.

The bad news for Nigel was that when they got him back to the station they searched him and found some speed in his jeans back pocket so he got busted. He’d forgotten to take it out the night before. As for the students who were arrested, they were piled in police vans, driven about thirty miles into the middle of nowhere and left to walk home. But the miners stayed at Essex University until the end of the strike and one or two of them were still on campus about six months after it ended.

The end of the strike was traumatic for all of us. The miners and their wives, and families were heroes. They were a million miles away from the smug bankers and capitalists who have been riding on our backs ever since. We had invested a lot of time, energy and passion in the strike. We didn’t have as much to lose as they did; the unemployment, repossessions, marital breakup, crime and shattered communities. But we cared. I hope they look back on that time of solidarity with as much fondness as I do.

Bliss was it in that dawn to be alive, But to be young was very heaven!