Windrush mural to go on show at the Tate 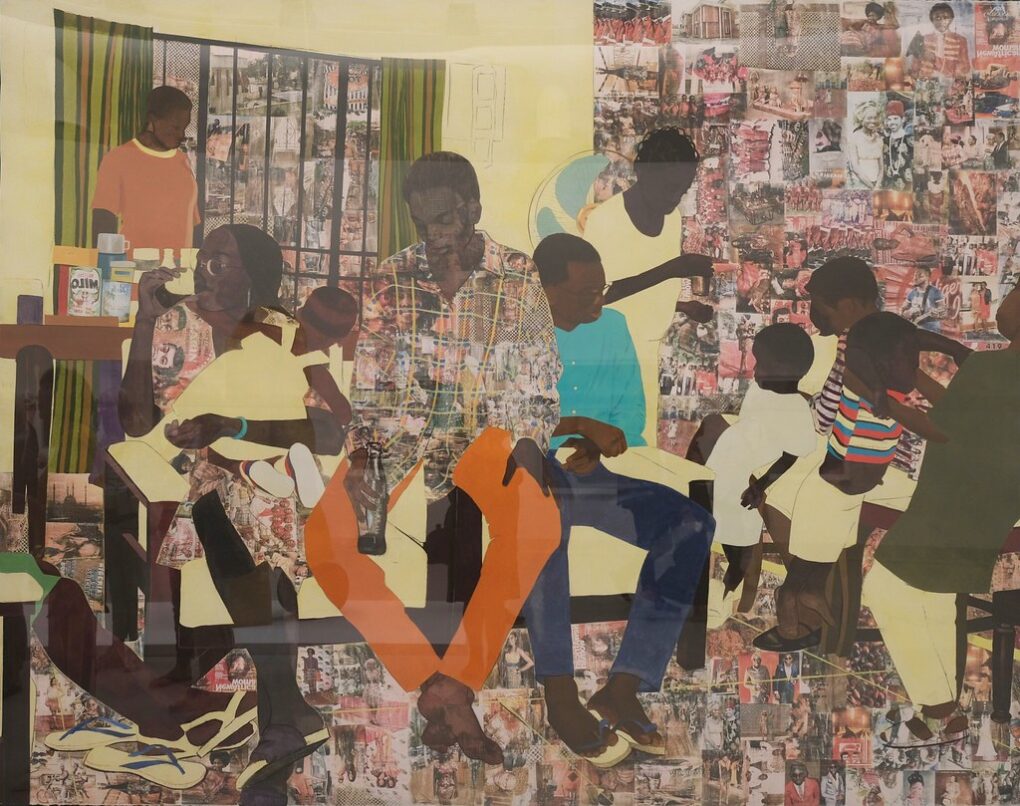 "Njideka Akunyili Crosby" by hermien_amsterdam is licensed under CC BY-NC-SA 2.0

A MURAL tribute to the Windrush generation, originally designed for Brixton tube station, is going on show at the Tate and is to become part of Tate Britain’s permanent collection.

The work, called Remain, Thriving, is three and a half metres long by almost two metres and was made by Nigerian artist Njideka Akunyili Crosby. It depicts a scene in an imagined south London front room where the grandchildren of original Caribbean immigrants have gathered together surrounded by photographs and furniture that recall the post-war generation who came to Britain from the Commonwealth.

Akunyili Crosby was born in Nigeria in 1983 but moved to the States in 1999. She graduated from Yale University School of Art in 2011 and was offered an artist-in-residency spot at the prestigious Studio Museum in Harlem. She has produced a number of works using the vivid colours which have come to characterise her work, including the one in the image above. It was in 2018 that she was commissioned as part of Art on the Underground series for Brixton Station. It was that image, inspired by the Windrush generation, that will now be on show permanently at the Tate.

Who are the Windrush generation?

The Windrush generation refers to people arriving from Caribbean countries in the UK between 1948 and 1971, the name coming from the ship the HMT Empire Windrush which docked in Tilbury in June 1948, bringing workers from Jamaica, Trinidad and Tobago and other islands to help fill post-war labour shortages.

According to University of Oxford estimates, they are among more than 500,000 UK residents who were born in a Commonwealth country and arrived before 1971 and who were given leave to remain indefinitely.

However, the 1971 Immigration Act changed all that, and so a British passport holder born overseas could thereafter only settle in the UK with both a work permit and proof of a parent or grandparent being born in the UK.

What became known as the Windrush Scandal broke when many of those who had been given leave to remain found in 2018, after the Brexit referendum brought about their need to clarify their status as citizens, that they faced deportation and detention. This was because the Home Office had kept no record of them and issued no paperwork – making it difficult for Windrush arrivals to prove their legal status – and in 2010 the very same office destroyed the landing cards belonging to the Windrush people. It is thought about 80 people who arrived in the UK before 1973 were removed by the Home Office.

In that same year, 2018, our then Prime Minister Theresa May apologised for their treatment, and an inquiry was announced and a compensation scheme put into place.  The Home Office Committee wanted an independent organisation to take over to “increase trust and encourage more applicants”, but the Home Office’s response was to say the department was “steadfast in our commitment to ensure that members of the Windrush generation receive every penny of compensation that they are entitled to”.

It is not only those who were unjustly deported who are entitled to compensation. While an individual would receive, under the Scheme, £10,000 for being deported, they would receive only £500 for denial of access to higher education and  £250 for every month of homelessness. These amounts are entirely arbitrary.

About 15,000 people are thought to be eligible under the Scheme, but the Home Affairs Committee said that by the end of September 2021, just two months ago, only a fifth of these had come forward, and only a quarter had received compensation. The reason for such a low number is probably that highlighted by some MPs, who argued the compensation scheme had itself become a further trauma for those applying, with a “litany of flaws” in its design and operation, and those who would be due compensation were found to be “still too fearful of the Home Office to apply.”

2018 was also the first year Windrush Day was commemorated. Now an annual event, it takes place on 22 June with exhibitions, church services and cultural events leading up to the day itself.

The Life Between Islands exhibition explores the relationship, in a broadly chronological manner, between the Caribbean and Britain in art across eight decades, from the Artists’ Movement of the 1960s and the Black Arts Movement in the 1980s to artists who have emerged in the last decade.

Director of Collection Polly Staple said: “We are delighted that the work of five pioneering artists within Life Between Islands will join our permanent collection. Spanning multiple generations of creative practice, these acquisitions enable the perspectives within the exhibition to be studied and enjoyed by generations to come, strengthening our representation of British art in ways that reflect the public Tate serves.”

Let us hope that it also serves to remind those who may have forgotten or who have chosen to forget the Windrush generation who are still awaiting compensation, and that it may reassure others of that generation and successive ones that we will not forget their contribution to this country and the immeasurable ways in which they have enriched our culture.