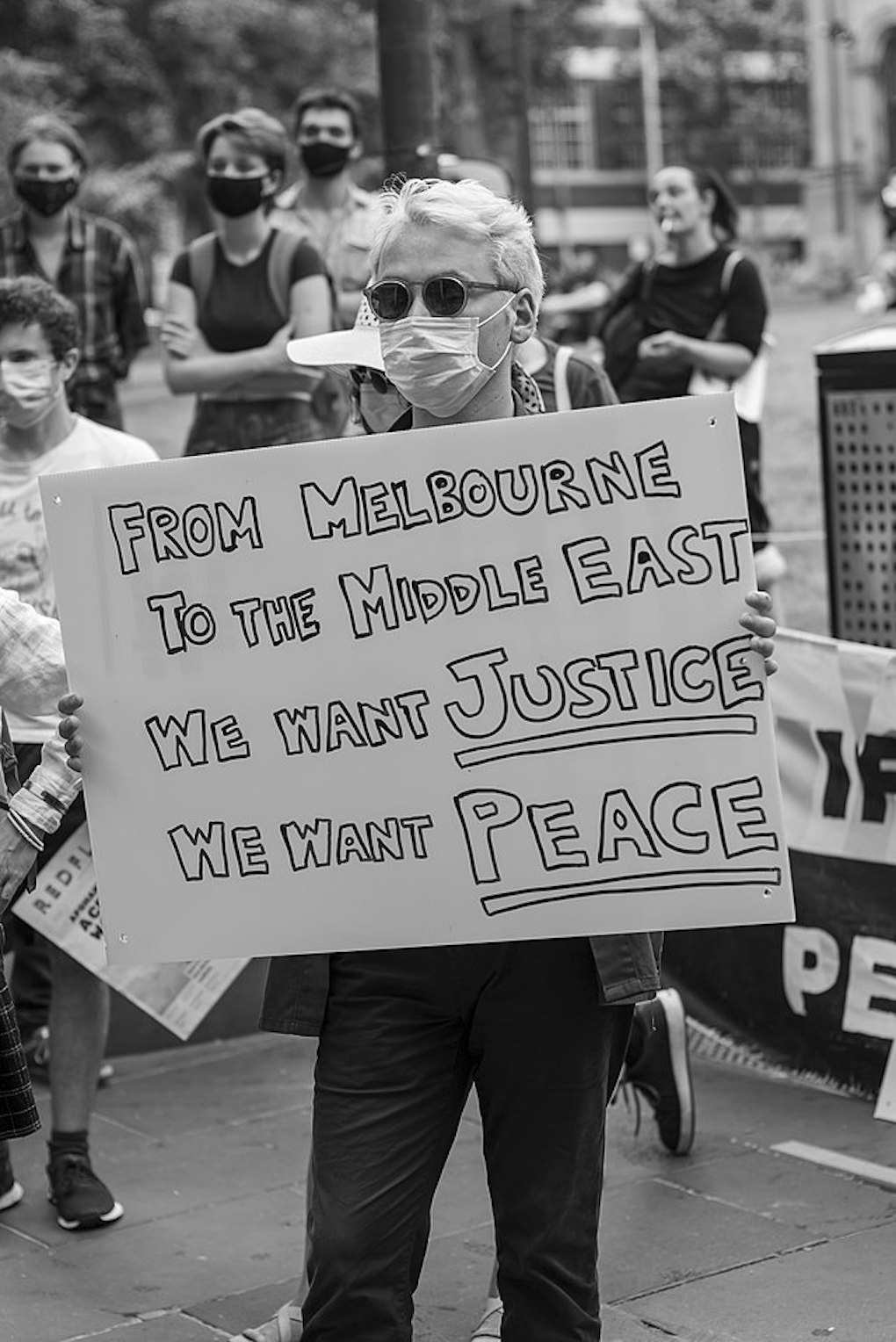 A small protest in Melbourne on 27 November 2020 calling for justice for the war crimes committed by the SAS in Afghanistan. Licenced under Creative Commons Attribution 2.0

A RUSSIAN soldier went on trial on Wednesday accused of war crimes in Ukraine. Vadim Shishimarin, a 21-year-old Russian tank commander, entered his plea in a Kyiv district court hearing in what is the first war crimes trial against a Russian soldier taking part in Russia’s invasion of Ukraine.

Shishimarin is accused of firing several shots with an assault rifle at a civilian’s head from a car after being ordered to do so, but, when asked if he had been obliged to follow an order which amounted to a war crime, Shishimarin told the court, “No…I fired a short burst, three or four bullets”.

In his second hearing yesterday, Shishimarin asked the Ukrainian widow of his alleged victim to forgive him for the murder of her 62-year-old husband. “I acknowledge my blame … I ask you to forgive me,” he told the widow, Kateryna Shalipova.

And yesterday two more Russian soldiers were charged with shelling civilian areas of Ukraine with GRAD missiles and pleaded guilty to violating the rules of war.

Impunity for the West

If these soldiers, and others, did indeed commit war crimes, then I doubt anybody would be calling for their release, but it does beg the question of why the West and its allies are permitted to commit what amount to war crimes with impunity.

Is it only last week that we saw Israeli forces shoot down journalist Shireen Abu Akleh in cold blood? Who is still talking about that? Who will stand trial for her murder?

Julian Assange is currently in prison for making public a video in 2010 of US soldiers fatally shooting 18 civilians from a helicopter in Iraq. Those killed included two journalists. The soldiers who committed these crimes are not in prison, the journalist who brought them to light is.

Go back seven more years, to June 2003, when Amnesty International published reports of human rights abuses by the US military and its allies at detention centres and prisons in Iraq, most notably the infamous Abu Ghraib prison, which had once been used by the government of Saddam Hussein.

Amnesty International’s report stated that prisoners had been exposed to extreme heat, not provided with clothing and forced to use open trenches for toilets. They had also been tortured, with the methods including denial of sleep for extended periods, exposure to bright lights and loud music, being restrained in uncomfortable positions and even the electrocution of genitals.

The following year when photos emerged documenting extensive torture, ranging from prisoners on leashes, to bodies piled atop each other in pyramid structure, to prisoners standing in crucifixion like postures, there were global shockwaves at the displays of brutality.

In 2004, when the Abu Ghraib scandal first emerged, former President Bush responded, “Under the dictator, prisons like Abu Ghraib were symbols of death and torture. That same prison became a symbol of disgraceful conduct by a few American troops who dishonoured our country and disregarded our values …”.

Note the wording in Bush’s statement: what was ‘torture’ under Saddam’s reign became ‘disgraceful conduct’ when carried out by the US. Eleven soldiers were charged with offences which took place at Abu Ghraib but, considering the torture and long term injuries, both mental and  physical, inflicted on their victims, they got off very lightly.

They were charged mainly with dereliction of duty, maltreatment, aggravated assault and battery. The soldiers were court-martialed, convicted, sentenced to military prison and dishonourably discharged from service, but the harshest sentence was 10 years imprisonment and loss of rank, pay and benefits – to just one of these soldiers. And the commanding officer of all detention facilities in Iraq, Brigadier General Janis Karpinski, was simply reprimanded and demoted to the rank of colonel.

The My Lai massacre

We can go back even further to the Vietnam War and the My Lai massacre, where more than 500 people were killed by US soldiers, and, when the truth finally came to light, after officials had tried to cover it up, only 14 soldiers were charged with these war crimes, and only the leader of the infamous Charlie Company, Lieutenant William Calley, was convicted. His life sentence was later reduced, first to 20 years imprisonment and then to ten.

Much can be written about war crimes committed by many sides; I mention Abu Ghraib and the My Lai massacre only because they are names many are likely to recall. But I hope the main point of this article is being taken: that Ukraine is putting on trial soldiers from the Russian army for far lesser crimes than their allies have committed. Or quite probably they themselves, for we are still only being fed information from one side in this tragic war.

Whilst we at Critical Mass, and socialists throughout the world, do not condone the actions of soldiers killing civilians, no matter where they might be, we firmly believe the real crime is war itself, not what soldiers might do when placed in that environment. We must never stop calling for peace.