What sort of country are we? The detention of refugees in the UK shames us all 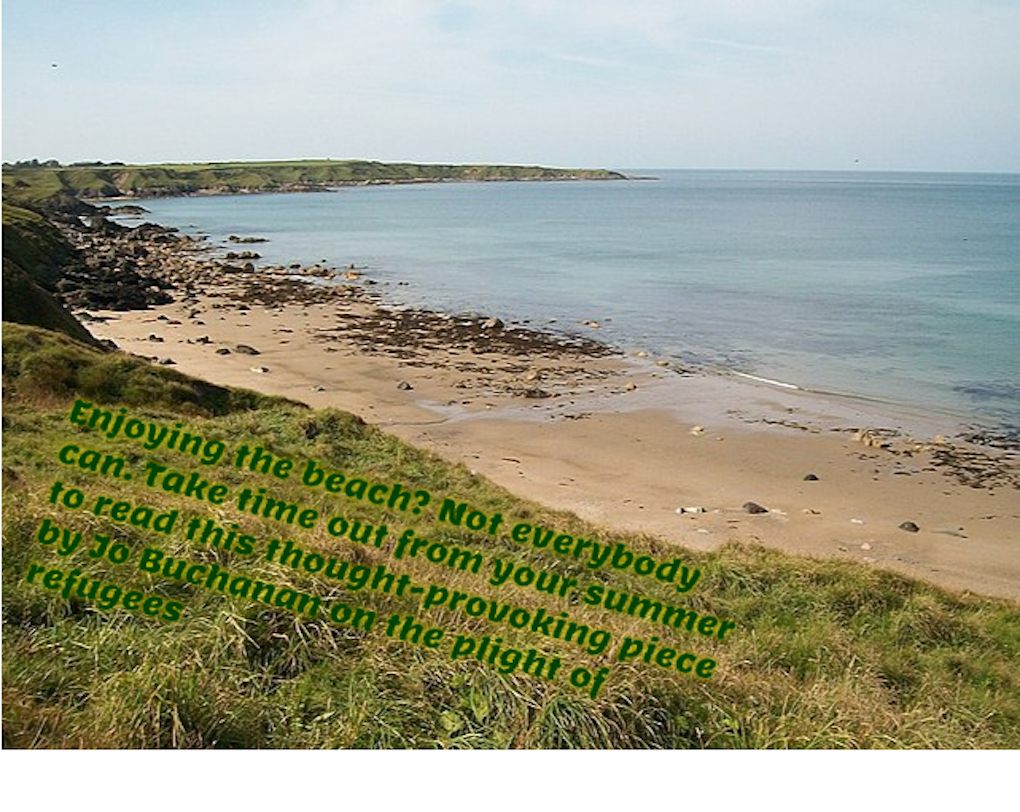 “We are better than this” and “What sort of country are we?” These were the words of David Davis, firstly in April and then last week, referring to the Government’s shameful plans for those seeking sanctuary in the UK. Davis was Shadow Home Secretary from 1994 to 1997 and Tory Cabinet member from 2016 to 2018.  He also fulfilled other roles for the party, including chair in 2001/2002, and was a leadership candidate twice. He has seen Tory leaders come and go and has had a wealth of political experience. Yet even Davis, a one time advocate of capital punishment and of restricting women’s abortion rights and opponent of LGBT rights, has seen what we have become, how unprincipled and heartless the current Tory administration and how immoral Priti Patel’s policies.

Detention awaits the courageous refugees who reach our shores

Priti Patel is in charge of a system which lets down thousands of asylum-seekers, including many children. These are vulnerable human beings fleeing potentially catastrophic backgrounds.

What happens to the desperate people who cross the English Channel in overcrowded, unsafe vessels, risking their lives navigating a major shipping lane, knowing others have drowned there? At least 28,500 people made the attempt in 2021. There are many stories from detainees about the horrific experiences they have had in detention. However, our MSM rarely draws attention to the injustices meted out to detainees in the UK.

The majority who arrive find themselves in one of our detention centres, where uncertainty awaits them. In 2020, journalist Harriet Morphy-Morris described the centres as dehumanising, traumatic, insanitary and overcrowded. There is mistreatment and neglect, and voices were raised in protest, arguing that the centres should be closed, especially as Covid was spreading rapidly at the time because precautions were not taken to prevent it. “There has been no action from the government despite conditions pushing detainees to breaking point and campaigners warning of a surge in self-harm incidents.”

These unfortunate detainees are not serving a criminal sentence, yet very often there appears to be no time limit to their loss of freedom. They may exist in a state of constant anxiety about their fate, spending days on end in limbo with no certainty regarding their future and often without hope. They fear detention coming to an end, as they are afraid of potential outcomes, and yet they fear the prospect of almost indefinite detention. There have been numerous reports of panic attacks, hysteria and despair.

The mental toll on detainees is enormous. K.A., writing anonymously for Unlocked a few years ago, after experiencing detention, commented, “Eight months after my release from detention, I’m still trying to put the pieces back together and there is not a single day I do not get flashbacks of my experiences in detention.“

A few of the detainees may have criminal records, often for something minor, but so many have done nothing wrong, nothing that could merit the term ‘illegal’ which is so often attached to them.

Conditions vary, but short-term holding facilities (STHFs), where arrivals are very often sent immediately, are reported to be in a particularly shameful state, and those confined in them are among the most forgotten and overlooked victims of Tory rule in Britain.

Most of the information on STHFs comes from government documents, but from 4th to 11th November 2018, Unlocked (Unlocking Detention) focused on the hundreds of people held under immigration powers in short-term holding facilities and prisons across the UK. Unlocked emphasised that no one should be held in STHFs for longer than 24 hours, although there are some residential facilities and other short-term units where people can be held for up to seven days. SHTFs seem to be a low priority for the government. “They are notorious for having austere conditions – no natural light, limited ventilation, and very little in terms of regime.”

Border Force is not fit for purpose

There are some reports of life and conditions in these facilities, and HMI Prisons (Her Majesty’s Inspectorate of Prisons) realised in 2020 how disgraceful, humiliating and soul destroying they are. For the first time in March 2020, Border Force short-term holding facilities had a national inspection by HMI Prisons. There had been previous inspections of individual facilities or groups but nothing on this scale which covered the country as a whole.

HMI Prisons discovered there were a number of operational short-term holding facilities which had not been brought to their attention previously by the Home Office and, after further questioning, there were inspections of 13 STHFs across the country, eight at ports and five at airports. Border Force was not able to supply enough detailed information about the numbers of detainees, their profiles or how long their detention had lasted. It appears that detainees could be held initially for quite long periods, for over 24 hours, “in facilities that were not fit for purpose.” The inspectors also found “inadequate leadership and management of detention”. Further, the inspectors reported that the lack of available information “suggests an alarming lack of oversight and accountability”. Staff felt as if they had been overlooked and did not receive national guidance, and no information about best practice was passed on to them. The inspectors decided the leaders should take a thorough audit of detention to make sure all the facilities were identified and properly equipped and had competent management.

Five sites on the coast which received refugees were inspected; refugees who had in all likelihood fled catastrophes, had long been displaced from their homes, had spent some years travelling, then waiting in hope and finally crossing the sea in dangerous craft, very often to Dover.

Inspectors found areas of concern in all stages of the arrival and reception process. The facilities in Dover “resembled a building site and were not fit for purpose”. Those arriving were often wet and cold and could spend hours remaining chilled and crowded in small units before they were moved. There was a lack of basic supplies of dry clean clothes, and there were poor bathroom facilities. The other sites on the south coast often held people in crowded conditions for a considerable time without sleeping facilities, showers or access to open air.

In the three months up until 31st August 2020, 29% of unaccompanied children were held for over 24 hours in Kent, and a 15-year-old was held for 66 hours. Safeguarding arrangements for vulnerable adults and unaccompanied children were weak, with vulnerabilities not clearly identified. There were instances when children had been moved to adult centres. There was a case where social services had not been informed by UK Visas and Immigration that a child had been moved to accommodation in London, and there was no assurance that the child would be satisfactorily cared for.

Another issue which arose at all sites was the failure to provide adequate professional interpreting services and the use of abridged asylum screening interviews. This led to a risk that those who were detained were not properly informed about what was going on and again that safeguarding issues would not be identified.

Border Force failed to prepare satisfactorily for a predictable increase in arrivals in small boats, yet these had been growing in number since late 2018. But still the facilities at Dover “remained poorly equipped to meet their purpose and important processes had broken down”. There should have been a coordinated strategic action involving different Home Office agencies and the port authorities.

Some arrivals were sent to Penally camp in Pembrokeshire and Napier barracks in Folkestone. In February 2021 there was an inspection of accommodation by HMI Prisons with the Independent Chief Inspector of Borders and Immigration (ICIBI) “We identified poor outcomes and serious failures of leadership and management… The general environment of both sites was impoverished, rundown and not suitable for long-term accommodation”. The level of cleanliness was variable.

“At both sites, residents reported high levels of stress, depression, and despondency.” They were extremely discouraged because there was too little communication from the Home Office and they were frustrated at the lack of information about their asylum claims and when they might be able to leave the sites. There were a number of cases of individuals who were at high risk of self harm who had been kept at Napier barracks for a long time without suitable support. There had also been some serious self harm incidents, and those at risk were in a “decrepit, filthy and damp isolation block, which was unfit for habitation”. At times children were kept alongside adults while waiting for an age assessment. Not long after the inspection, Penally Camp was closed and there were changes at Napier Barracks, including the closure of the isolation block.

An unacceptable number of detainees are in prison

According to Unlocked: “Those detained in prisons are even less visible than those held elsewhere in the UK’s detention estate, and face additional challenges.” At the time of writing 14.4% of the total population detained under immigration powers were being kept in prisons. Some appeared to have no access to legal representation and support. In 2018 fewer than one in 10 had had advice from an immigration solicitor. Some face being held indefinitely under immigration powers.

Despite trauma many refugees speak out and make a difference

It is clear that conditions where migrants are held vary considerably, but the most abysmal appear to be the STHFs and the prisons. It is desperately tragic that some refugees are returned to the countries they fled from, their fate uncertain and never to be heard of again. Putting people at risk in this way is an appalling reflection on the state of UK justice today. Detention results in lasting trauma, but detainees can emerge and tell their stories and so often begin new lives with a message of hope. In the words of K.A.:

What I would say to people out there reading this is never give up. You only lose when you give up. More importantly, tell your story. These little voices coming together that will send out the greater voice to make a difference. Your voice can make a difference.