What is Critical Race Theory? 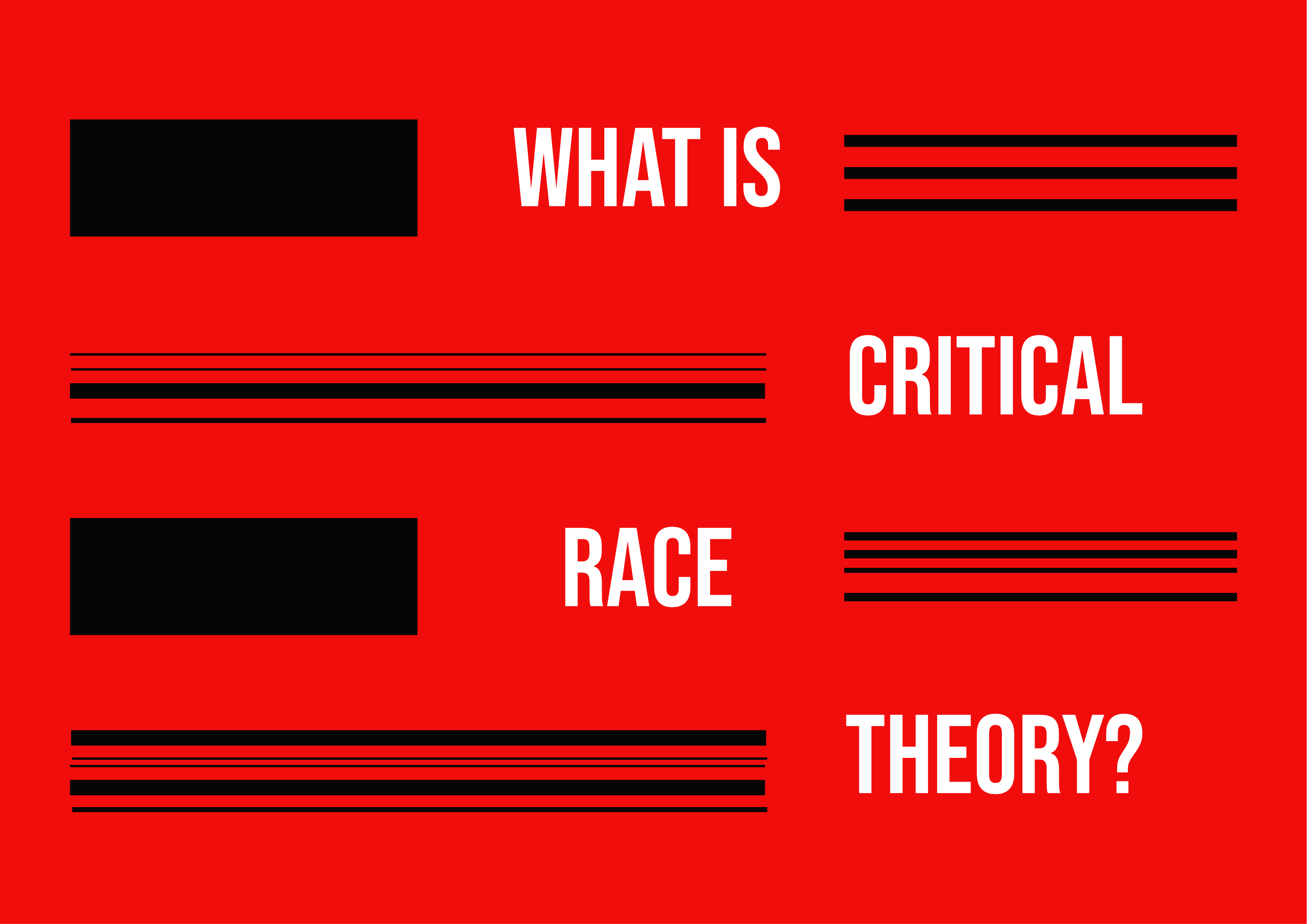 The right-wing of politics has no policies to offer the middle and working class. Its proponents are constantly looking for spectacular subjects that are threats to ‘our way of life’. Critical race theory is their apocalypse de jure. Shame they are too stupid to understand what that is.

What is Critical Race Theory?

Critical race theory (CRT) has its origins in legal scholarship during the 1970s in the US. Academics were trying to understand how and why the hard-fought and won civil rights act was not providing practical, positive change for people of colour. It critically examines law as it intersects with issues of race, and challenges mainstream liberal assumptions, in general, and in approaches to racial justice. It examines social, cultural and legal issues as they relate to race and racism.

What Critical Race Theory is not.

CRT is not teaching white children that they are white supremacists. It is not trying to shame white children into guilt trips over slavery. It is not part of some ‘cultural Marxist’ (whatever the hell that is as there is still no actual definition of what the right mean when they say this. There is a parallel with Nazism and ‘cultural Bolshevikism’ used to ‘other’ the Jews in general, anyone of non-Christian faith, Socialists etc, of course) plot to take over the world. In fact, outside of where you would think it would be taught or even used, universities, research centres and policy units etc, CRT is not ‘taught’ anywhere.

No policies? No worries! Simply scare up the people.

CONTENT WARNING!!! – If you click the link below to validate my conclusion of PragerU’s thought-free BS, and it is your first time experiencing them, you WILL encounter wilful stupidity mixed with racism and white supremacist denial of an exceptional level.

A simple example of the ramp-up from academic study to existential threat is that pushed into the face of its viewer by PragerU:

‘Have you heard of Critical Race Theory? If you haven’t, you will. It’s coming to a high school, college, or workplace diversity training session near you. What do you need to know about it, and what can you do to stop it?’

The framing is threatening out of the gate. ‘Have you heard about this? You really need to. It’s coming for our kids!’ It doesn’t matter that this is a fact-free racist rant, if it has scared you then its job is done. Chris Stigall, right-wing talk show host and Trump diehard illustrates this ‘nicely’.

From Fox News’ website: ‘PA father says he’s pulling youngest child from public schools over critical race theory’. Taken from a segment on Fox News, Chris Stigall responds to questions from the host that assert their agreed definition of CRT. Of course, he grabs this with both hands and runs and runs with it. His diatribe boils down to, ‘I don’t understand what CRT really is. I feel that it is bad, for white people with power, like me. You too should be scared because, if they are coming from me, they will come for you’.

Surely none of this matters as it is just the usual garbage from a far-right news outlet, a government would not be taken in by it, right?

Until 20 October 2020, the term ‘Critical Race Theory’ had never once been used in the UK parliament’s House of Commons. However, by the end of the day, it was of such concern that the UK government’s stance on CRT was it was “unequivocally against” the concept.

If I told you that another esoteric term, such as Ethical Hacking, had never been discussed by parliament would that surprise you? I doubt it! Parliament does not care about academic studies, except when there’s the slimmest of chances it reveals systemic power used to oppress and manipulate its people. Oh, and it does not hurt that it meets with the racist vision of other nationalist authoritarian regimes. You can think of your own examples here!

So, why are the right so invested in this?

Critical Race Theory is a framework and toolset that allows academics to better understand where the law, regardless of intention, ends up giving poor or negative outcomes because of an inherent inability for the system to provide equity. Even when the right provides an ‘explanation’ of CRT, due to the agenda being pushed, the recipient ends further away from the facts than before. However, they are left with lots of feelings. Fear, terror, impotence, self-loathing, anger and hatred.

The anger and hatred is the point. Getting the audience to feel there is an existential threat to them, their family, their way of life, and it must be someone’s fault, is the mechanism leading to the inevitable conclusion. Of course, it can only be those Liberal Elites and those poor brown people and the ‘regular’ poors. They are to blame!

We have seen extraordinary action and solidarity amongst the working class over the past 18 months. In fact, it has been a coalition that, whilst based on those occupying only the lower segments of Maslow’s hierarchy of needs, has not been reliant on class, race or gender.

People from all backgrounds across the entire planet were unified around the tragic and horrific murder of George Floyd by an agent of the state. Whilst it was all caught on camera and uploaded to the internet for the whole world to see, there have been moments similar to this that did not ignite such indignation and a need for a fight.

It is hard to miss the irony that the state, its laws and norms came together to allow police officers to simply think they were doing their job in allowing one of their members all too casually to murder a man in cold blood and broad daylight. There it is. Despite there being laws to protect the citizenry, whether under arrest or not, a Black man is murdered by agents of the same state the laws emanate from. Whilst those laws are not ‘racist’, the system comes together to provide a biased and weighted outcome.

People are better educated than they have been. They have access to information and events in real-time. If they have any critical thinking skills, they can discern the facts of the matter. This is what terrifies the Conservative government in the UK and right-wing administrations across the world. Educated people do not listen to dogma and they do not give up their right and ability to think for the sake of tradition. This makes them very dangerous.

What can we do? Is it Already Being Done?

Critical thinking is a tool, a way to reliably analyse, evaluate and synthesise information and derive or confirm facts. Facts known from this method are all evidenced and verifiable. This means, where research shows progression, the facts must be updated to accept this new understanding. Facts are not beliefs, beliefs are simply feelings without facts. This tool has helped the people ‘get good’ at spotting bullshit and when they were being screwed over!

Like critical thinking, CRT is a set of tools, but to see where laws are systemically, inherently racist and oppressive. Those with power do not want to give that up. They will obfuscate the situation, manipulate the systems that are built to their advantage, lie and, when they deem necessary, use force to uphold their system.

During a hyperbolic and mostly false rendition of appeal to emotions, Conservative MP, Kemi Badenoch, who, at the time, was Minister for Women and Equalities, summed up her thoughts on the ideas of CRT, social equity and the teaching of accurate history to children in the UK with this fact-free jumble of lies and personal stupidity:

‘We should not apologise for the fact that British children primarily study the history of these islands, and it goes without saying that the recent fad to decolonise maths, decolonise engineering, decolonise the sciences that we’ve seen across our universities to make race the defining principle of what is studied is not just misguided but actively opposed to the fundamental purpose of education’

Using the incredibly easily debunked template of nonsense above, I have rewritten the ‘content’ but using facts and not simply Kemi’s feelings on the matter:

‘We should not allow children of the United Kingdom to study a false history of these islands. It should go without saying that an academically correct history to show how this affected all areas of life is a minimum requirement. Facts are the defining principle that determines the curricula our children follow, not outdated dogma and lies that serve one class or colour of society. The fundamental purpose of education is to impart knowledge and skills. Both of which are derived from verifiable facts not what a small and powerful section of society feels.’

Simply put, we shouldn’t accept the mendacity that political and media agendas wish to promote. Be critical of what we are told, watch and read. Be as critical as some are to those they know nothing about.

UK government and assorted under-informed people in general, and Kemi Badenoch in particular, you are welcome.