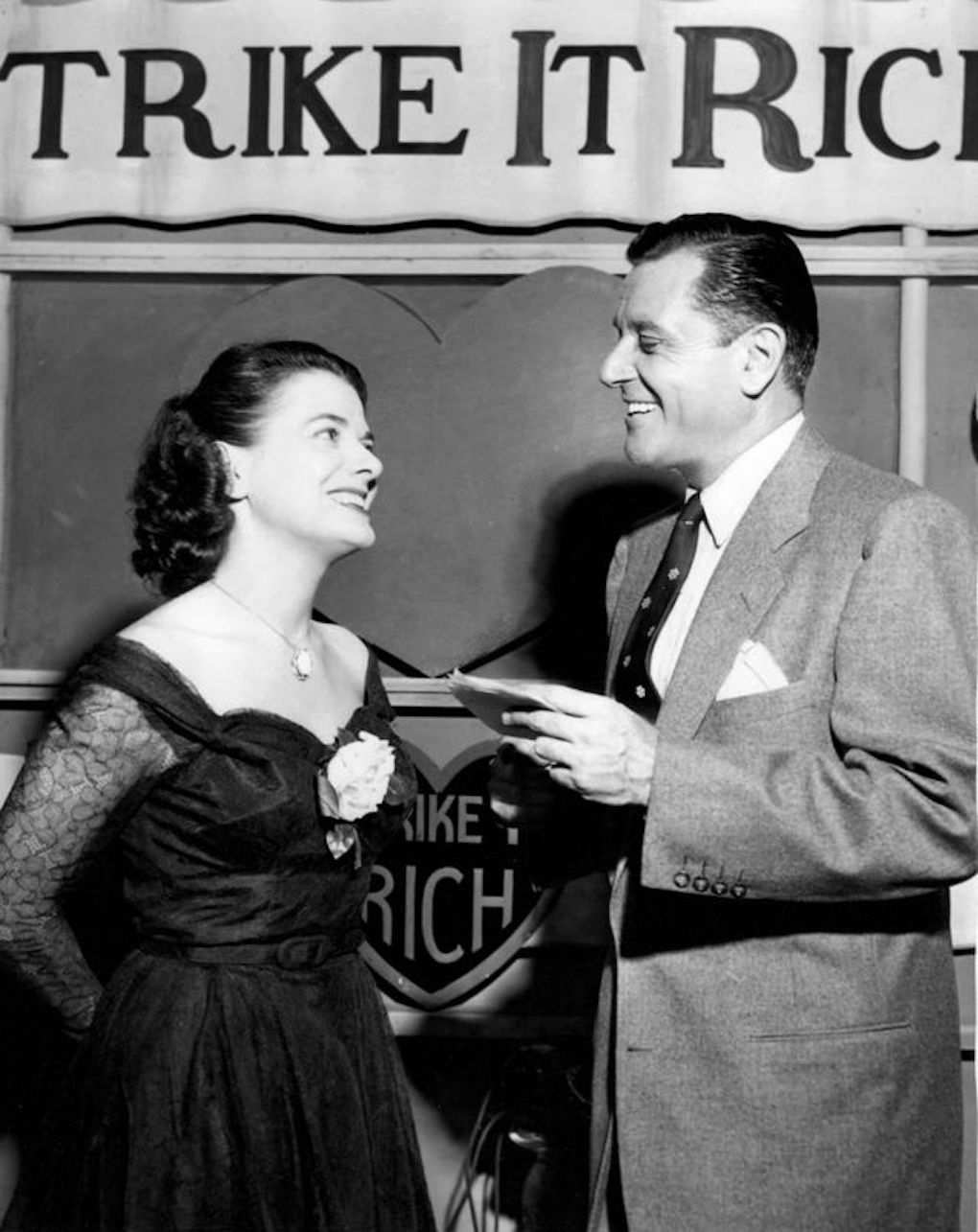 Aspiring to wealth is nothing new. Publicity photo from the television program Strike It Rich. Pictured are Jane Wilson standing in for someone in the "Helping Hand" segment, and host Warren Hull. Strike it Rich 1952.JPG Public domain

Everybody has heard of ‘aspiration’. It’s the word we hear on politicians’ lips. It is a favourite of both the Tories and Blairites. So, every political party in the UK must appeal to ‘aspirational voters’, otherwise it is doomed to permanent opposition. That is a fact – isn’t it? At least it is what we are frequently told. The problem is that we first need to understand what aspiration is before we can determine how important it is as a measure of how people intend to vote.

For the political class who have swallowed the idea that appealing to aspiration is essential to win elections, aspiration means ‘getting on’ – or that is how my parents’ generation would have described it. It means you want to earn more, live in a bigger house in a more desirable area, have more foreign holidays and generally get richer and richer. In a conference speech in 2012, David Cameron sought to present himself as the leader of the ‘aspiration nation”. Here is a quote from the Guardian:

“In a sometimes defensive speech to his party conference in Birmingham, he sought to fend off the image of his party as a defender of the rich, saying: “We are the party of the want to be better off,” and insisted his goal was to spread, not defend, privilege.”

But there is a problem with all this.  For a start, how many people don’t want to be better off? Not many by my reckoning, and that applies right across the spectrum of people in society, from rich to poor. So you could argue that saying you are the party of people who want to be better off is stating the obvious, or not saying anything much at all. But this is politics and, of course, there is an agenda here. People who ‘want to be better off’ are a particular group – they are, in Tory and Blairite terms, the ‘strivers’ and, as we know, in Tory Britain, if you are not a ‘striver’, you must be a ‘skiver‘, and, if you are on benefits, you must be demonised.

So the word ‘aspiration’ has become a particular neoliberal framing of those who ‘aspire’. It divides the nation into those who are worth something and those who are worthless; the ‘hardworking families’ on the one hand and the ‘benefit scroungers’ on the other. And ‘hardworking families’ are those who share Tory and New Labour values of ‘getting on’, even if it means trampling on others to be ‘better off’. The poor, the low-paid and the unemployed, public sector workers – who are of course just a bunch of jobsworths – can be written off.

During the years of the Blair/Brown New Labour governments, aspiration was at the top of the agenda. New Labour must appeal to those who want to ‘get on’ at all costs, ignoring the rest. Blairite guru, the now-forgotten Philip Gould, wrote a book about how Labour could achieve and maintain power called ‘The Unfinished Revolution’. I’ve read it and I wouldn’t recommend it. It says largely what I have already covered – vote for us and you can have an even bigger flat-screen TV and three foreign holidays instead of two. Because that’s really what people want, isn’t it? That’s what life is all about. A political party’s focus must be on wealth creation and entrepreneurs and sod anyone else.

A perfect example of an ‘aspirational’ person trampling on others to ‘get on’ would be someone who took advantage of the right-to-buy council house scheme. They get a public asset at a knock-down price and, by doing so, they deny the right to live in that house to others who need social housing. They can then go on to sell the house at a handsome profit, and when they do it will almost certainly be bought by a landlord who rents out the property at an exorbitant rent. And that is exactly what has happened with many thousands of council houses sold as a result of this Tory policy, and the outcome is a housing crisis. So much for the ‘aspirations’ of these Tory voters.

Aspiration means a lot more to me, and many others in the UK, than simply ‘getting on’ and personal gain, because my aspiration is to live in a better society, one which has genuine equality and one in which we don’t live beyond our means environmentally; a society in which everyone has access to decent housing and healthcare, has meaningful and rewarding work and is able to live in a wholesome, thriving environment. That kind of society will make everyone better off, and that’s what aspiration ought to be about, something which reflects the right values rather than the narrow, materialistic and selfish values of the Tory Party – and Blairite Labour. It’s not the kind of society that can be built by making a few more people ‘better off’ through policies like right-to-buy. What’s more, it’s the kind of society that lots of people would like to vote for if they were given the chance, as Corbyn’s successful 2017 manifesto showed.

We need to reject the neoliberal framing of ‘aspiration’ and replace it with one which reflects the values of social, economic and environmental justice, and this is what any decent political party would focus on. At a time of climate crisis and a cost of living crisis, it’s more important than ever that parties of the left promote and support the right values. That is the only way out of the mess we are in.