Western Culture is Toxic and Damages All of Our Lives 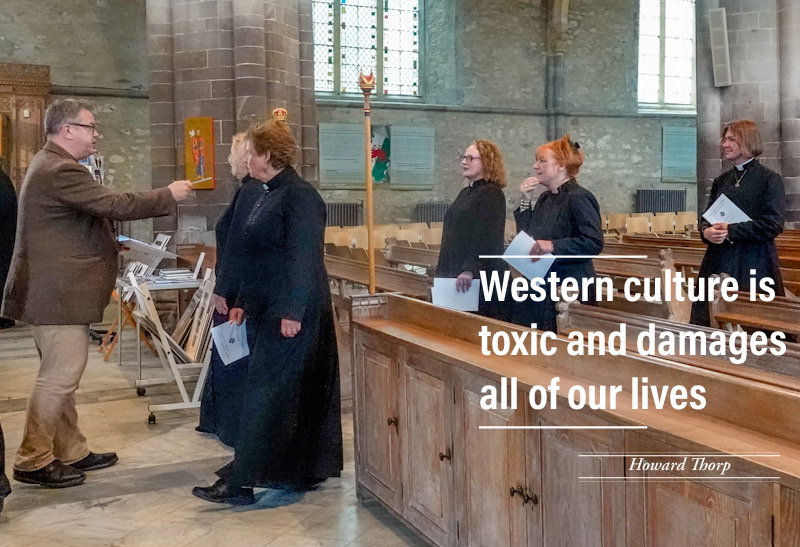 Firstly, I want to start with a disclaimer. This is a short piece. But this topic could easily be the subject of a long essay or even a book, so I’ll just concentrate on what I think are some key points.

Western culture is often seen as arising with the ancient Greeks, with Socrates, Plato and the others who gave us philosophy, geometry and democracy. Move forward and we reach the end of paganism and the beginning of organised religion. Christianity gave us original sin. This concept didn’t come from Jesus, although some Christians believe it originated in the Garden of Eden with Adam and Eve, but came from the writings and ideas of St Augustine, who was born in 354 AD:

“Original sin is an Augustine Christian doctrine that says that everyone is born sinful. This means that they are born with a built-in urge to do bad things and to disobey God. It is an important doctrine within the Roman Catholic Church. The concept of Original Sin was explained in depth by St Augustine and formalised as part of Roman Catholic doctrine by the Councils of Trent in the 16th Century.”

The very idea that people are ‘born bad’ leads to the idea that they need to be controlled and punished, something that is still a feature of Western culture today. And along with this comes the patriarchy of Christianity and the subjugation of women.

Fast forward to the ‘Enlightenment’ which is reckoned to have happened during a period between the late 17th century and the early 19th century. Although it stressed reason, logic, criticism and freedom of thought over dogma, blind faith and superstition, it also gave us philosophers like Hobbes who wrote about life “being nasty brutish and short” – a pessimistic view of humans who, he thought, were selfish and only interested in personal gain. The solution? Put a powerful person – a sovereign – in charge to punish people who stepped out of line.

Then we have the ‘othering of nature’. This is key because it deems that humans are not part of nature and that the natural environment is something to be owned and exploited. This has led to the rampant destruction of nature and mass exploitation of animals in factory farming which is causing huge damage to our planet:

“From religious texts teaching that God provided humans with dominion over Earth to futuristic literature pitching nature as our past and human ingenuity and technology as our future, the narrative that humans are beyond – or even superior to – nature is deeply entrenched.”

The rise of the concept of the individual through Goethe and Mill to the present has also caused damage by helping to undermine our sense of community. We are social animals first and foremost; we depend on our families, friends, and community – something the Covid crisis reminded us of. A person growing up in the Middle Ages in England would have thought of themselves as part of a community, not an ‘individual’ in the sense that we do now. Without the cult of individualism, Margaret Thatcher would never have been able to say, “There is no such thing as society”. When our culture focuses on ‘me’, ‘my happiness’, and ‘my wealth’, we have a toxic recipe for exploitation and repression.

The Age of Empire, in which European countries such as Spain, France, Holland and Great Britain built empires around the globe, brought us a new wave of problems. Whatever you may think of empire, it was (and still is) the looting and pillaging of natural resources and people from foreign countries. It has led to mass death, environmental destruction and rampant racism throughout the globe. If you are going to subjugate peoples, enslave them and steal their property and resources, it’s a whole lot easier to do it if you see them as being inferior to the (white) colonists. Empires such as Britain’s also helped to spread homophobia around the world. Countries which hadn’t previously discriminated against gay people in a formal way, through the law, began to do so.

These are some of the key reasons why racism, misogyny, homophobia and an obsession with criminalising and punishing people are so prevalent in Western societies and other places around the world.  The climate and biodiversity crises are the direct result of the ‘othering of nature’ and threaten the future of our species and life on our planet.

As I write this, a new variant of Covid is ripping through communities, and hospital admissions are going up. But most of the people I know are flocking to indoor events, with poor ventilation and without taking any precautions such as wearing a mask. Whilst this is to some extent understandable, given the restrictions of the past two years, it’s also an example of Western exceptionalism, something which comes from the history and concepts I’ve been describing. In the Far East, in places like Japan, people think nothing of wearing a mask. It’s part of their sense of community and of protecting themselves and others.

So how can we move away from our toxic culture towards one which equally respects all people and the nature that we are a part of? Well, we can learn much from Indigenous societies which see themselves as at one with nature. Such societies account for only 5% of the Earth’s land mass but 80% of its biodiversity. Not only that, but many Indigenous societies have much more civilised ways of dealing with gender and sexual orientation than we do. In Indigenous culture:

“It wasn’t until Europeans took over North America that natives adopted the ideas of gender roles. For Native Americans, there was no set of rules that men and women had to abide by in order to be considered a ‘normal member’ of their tribe.”

In fact, people who had both female and male characteristics were viewed as gifted by nature, and, therefore, able to see both sides of everything. According to Duane Brayboy, writing in Indian Country Today, all native communities acknowledged the following gender roles: “Female, Male, Two Spirit Female, Two Spirit Male and Transgendered.”

There is much we can learn from Indigenous communities, and their cultural concepts need to be much more widely appreciated and implemented. We don’t have to live the way we do with our narrow and toxic view of gender and race, our obsession with criminalising people, our rampant destruction of nature, and the primacy of the individual over all the rest of us. It’s going to be tough but we have to rebuild and remake our culture. The first step is acknowledgement of the damage it does to our lives and planet. Many people understand that but don’t recognise the sources of our problems. We need a complete rethink and a holistic approach. Time is running out and we need to get on with it!