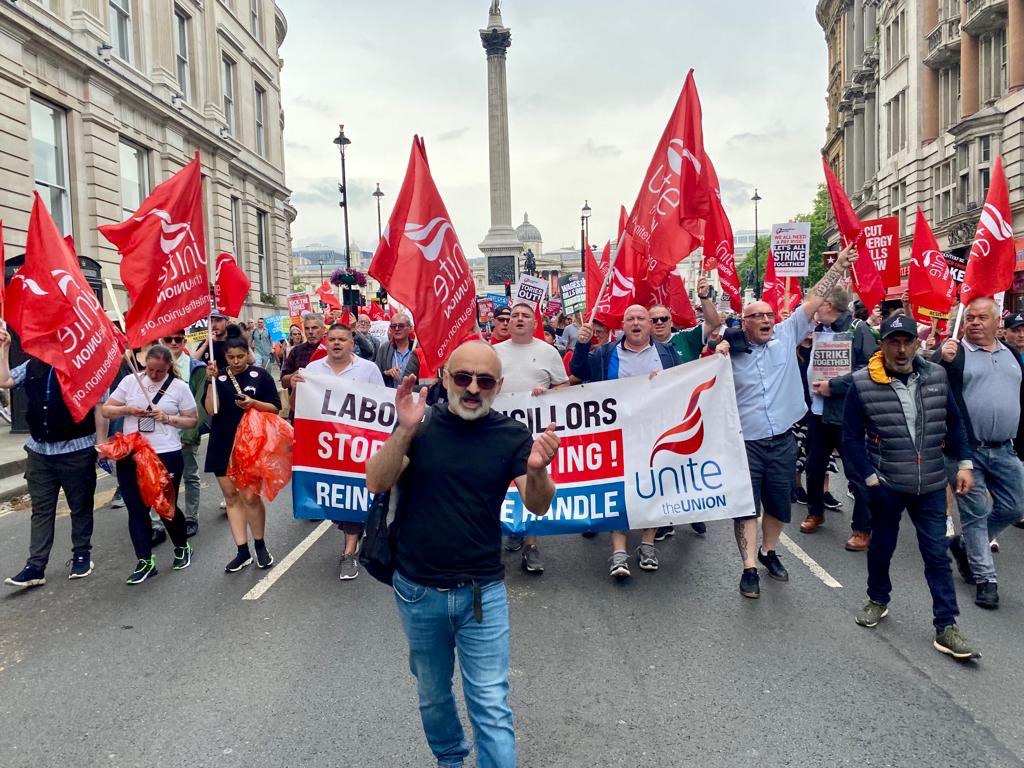 We Demand Better was the message from the TUC demonstration that mobilised tens of thousands of workers on Saturday to travel from all over Britain and march in organised blocs behind their trade union banners. It is the first time since 2018 that the Labour Movement has been mobilised on a class basis in protest against the Tory government.

Me Too, Black Lives Matter, Climate Catastrophe, Save the NHS – in recent years mass movements have mobilised many thousands of individuals around issues which matter to us all. But we have been mobilised as individuals not as a collective. Saturday marked a change. The organised working class is on the move again.

In an otherwise sympathetic report on the demo, the Mirror headline about ‘people who deserve better’ was a subtle attempt to de-escalate the struggle and turn it into a plea for sympathy. Ever since the start of austerity we have had pleas for sympathy, tales of hardship and appeals for the government to do something to ease the suffering which is a direct result of political decisions they themselves have made.

On Saturday we did not ask or plead. We demanded action and we threatened action ourselves. ‘If our pay does not rise, we will rise!’ was the message on one banner.

This new layer of class confidence and militancy arises directly from the RMT ballot for strike action on the railways. 50,000 rail workers are due to take national strike action over pay, conditions and redundancies. Airline workers are balloting over similar concerns. Teachers are threatening to ballot over pay.

Meanwhile the government presses on with its ‘anti-woke’ agenda. Starmer is to blame for the rail strikes!? Refugees must be transported to Rwanda to deter people smugglers. Assange must be deported to the USA because reporting the truth is espionage. We are all Putin’s puppets for attacking Johnson because Zelenskyy likes him.

Anything and everything to distract us from the truth that the Tories still fear us. They do not fear Starmer. His lacklustre performance as Labour leader is a gift that keeps on giving as far as they are concerned. But they do fear unity in action and the solidarity for the RMT that was so evident on Saturday’s demo. What if NUJ members are encouraged to take action over Assange, or PCS workers refuse to administer the Tories racist policies on migration and refugees? What if the TUC is emboldened by the rising tide of militancy to call a one-day general strike in defence of living standards?

In France it looks like the coalition of the left, the New Popular Union (NUPES) will fall short of an absolute majority but will deny a majority to Macron in the French parliament. Jean-Luc Mélenchon’s La France Insoumise (“France Unbowed” or LFI) is at 86 seats. Ecologists are set to take 28 seats. The Socialist Party is poised for 22 seats and the French Communist Party 13 seats.

This comes weeks after the main question in France was whether the centrist Macron would beat the fascist Le Pen for the presidency. Mélenchon was rightly admired for his statement that if elected he would grant French citizenship to Julian Assange and seek his repatriation to France. Left wing political leaders can make a difference, even within the constraints of a capitalist economic system.