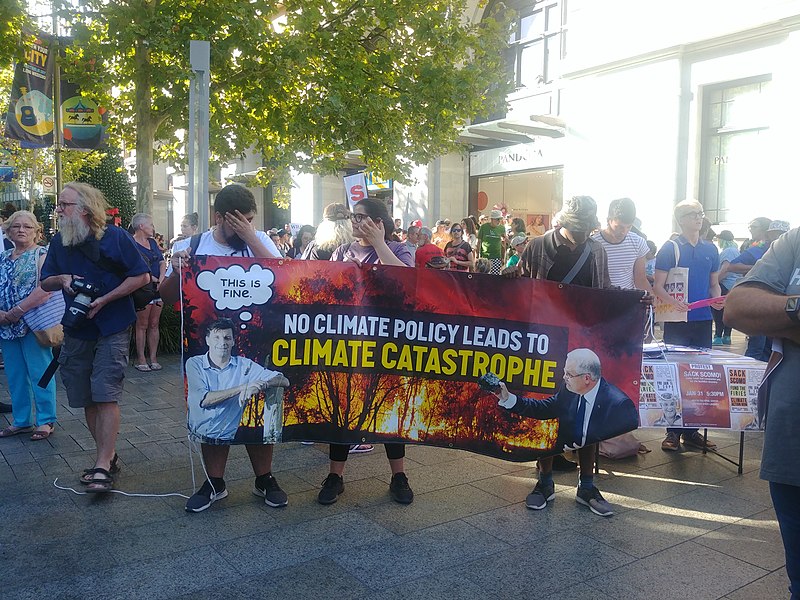 As the world focuses on the war and crisis in Ukraine a recent report by the Intergovernmental Panel on Climate Change (IPPC) has’t gained the attention it warrants, being buried amongst the rubble of the european conflict. And, in a week dominated by the war, we have had a savage reminder of just how grim the climate crisis is becoming.

In Austrailia, which suffered a drought and horrific fires two years ago which were estimated to have killed three billion animals, the towns of New South Wales were hit by a devstating flood in the past week. The Guardian reported on one of the worst hit communities Lismore:

“Lismore post-flood has a smell that has elements of rotten fruit, lawn clippings, urine and mud. There’s about 10cm of slippery ground sludge that is as dark and thick as melted chocolate – but with that smell. In some parts of the town, the force of water has torn up pavers. Towers of rubbish dot the footpath and Mud Army volunteers are hurriedly, almost feverishly, building those mounds (some almost two metres) ever higher tossing on everything you can imagine – curtains, carpets, furniture, toys, clothes, shoes, china. “It’s worse than 2017” has become a greeting, almost a salute.”

The IPPC report makes sobering reading and has been termed the bleakest warning yet: “Half of the world’s people are ‘highly vulnerable’ to serious impacts from the climate crisis, a billion people in coastal areas face inundation, mass die-offs of species including trees and coral have already begun, and close to a tenth of the world’s farmland is set to become unsuitable for agriculture.”

The good news is that the report makes clear there is still time to adapt but we can only do this if we make a rapid transition away from fossil fuels but there is little sign of governments acting with the urgency which is needed. Leading UK climate scientist Kevin Anderson has co-authored a piece in Climate Change News which is worth quoting at length:

“The UK Government approves new North Sea oil fields and presides over airport expansion. The EU ignores climate science, embraces ‘gas as a transition fuel’ and sees SUV sales soar to a record high. Across the Atlantic, US president Joe Biden’s climate claims are undermined by $25 billion of federal funding for airport development and a rise of over 6% in US CO2 emissions in 2021.

Three months on from COP26, with declarations of climate emergencies now de rigueur and with Exxon and Saudi Arabia joining the ‘net zero’ choir, emissions in 2022 are again set to rise. As we return to a thriving business as usual, it is surely time to reflect with humility on our long-standing failure to curb global greenhouse gas emissions.”

If that weren’t bad enough, in the UK, the right are blabbering about the cost of net zero being too high and calling for an increase in fossil fuel use incluing the re-etablishment of fracking in the UK. We must make sure that sanity prevails.

Of course, if governments took the necessary meaures on the transition to renewable energy, heat pumps and well insulated homes it would not only help to keep global temperatures below a rise of 1.5º C but would also condiderably ease the cost of living crisis which is likely to be made worse by the conflict in Ukraine. In the UK we need goverment action now to mitigate the worst effect of the climate crisis, stopping new oil fields, coal mines, airport expansion and road building, and investing in a green new deal. Of course this will cost money and we know Rishi Sunak isn’t keen on government spending unless it is used to prop up banks and corporations. Now its time for bold action and a people’s QE for the climate. We need to put aside our differences and work with all groups fighting for climate justice including XR and Insulate Britain. We must all work hard to make sure our voices are heard.