Voices from the margins: Paula’s story 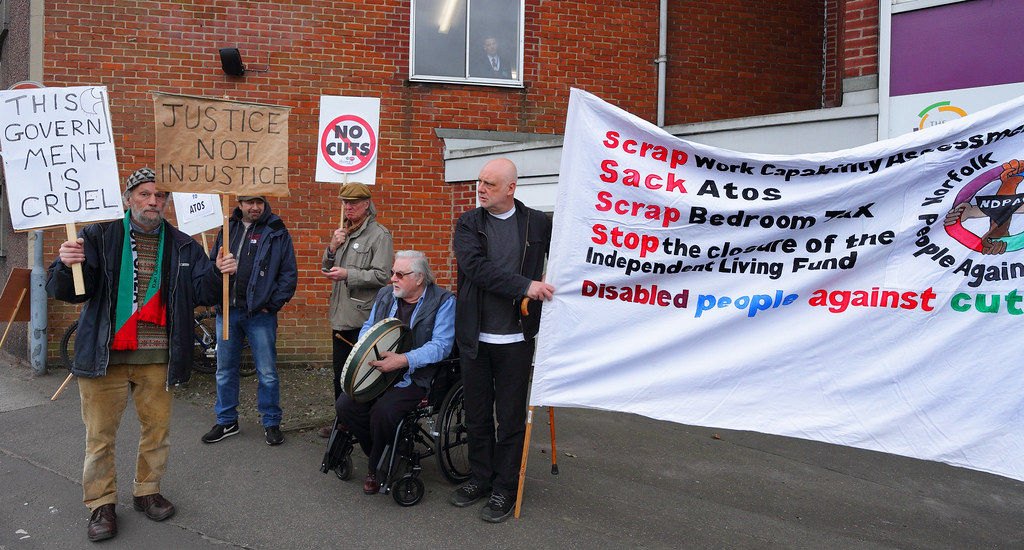 "Lunchtime protest by disabled people in Norwich outside ATOS offices" by Roger Blackwell is marked with CC BY 2.0.

If you don’t know there is a cost-of-living crisis right now, you have to be living on the moon (or in Westminster). Critical Mass has supported both the People’s Assembly protests held throughout the country and also the Big Power Off protests organised by Disabled People Against the Cuts (Sheffield).

Throughout this week we are going to highlight the human cost of pursuing recession fuelling policies.

This Sunday (April 10th) sees the second Big Power Off protest, and we caught up with disabled activist and campaigner Paula Peters to discover the human cost of government policies that are pushing more and more people into poverty. This is Paula’s story:

The UK has, for many years now, been a horrendous place to live in. We’ve had 12 years of austerity cuts which have had a catastrophic impact on people’s lives. From cuts to NHS care, huge cuts to social care, social security cuts, rising of zero hours contracts, precarious work and the firing and rehiring of workers. There has been the horrendous rise in food banks, homelessness and an erosion of basic human rights.

I’m a disability rights activist and trade unionist. I’m on ESA and DLA, I have rheumatoid arthritis and complex mental distress. The government has for many years removed disabled people’s rights and further marginalised us. It’s getting increasingly difficult to get the support we need.

The Big Power Off campaign is hugely important. It’s a way for everyone, wherever they are, to get involved and give the energy companies a clear message. By joining in the Big Power Off we are taking the power back. The more people involved, the more we can hit the companies’ profits.

These greedy companies only care about that, so let’s collectively hit them where it hurts in the profit margin and tell them enough is enough.

Going forward things are going to get worse. The government is attacking the right to protest and criticise the government with the Police and Crime Bill and the horrendous Nationality and Borders Bill. Sweeping privatisation will see further attacks on the Welfare State and pave the way for health care and sickness to be given to private insurance companies. The government wants to abolish the state’s duty of care so that, if people don’t have the money to pay for services, they will have to go without. It’s a frightening future, which is why it’s important to fight back.

I’ve been impacted by rising energy costs and food prices. They have caused sleepless nights for me, wondering how I will manage. I’ve reduced energy consumption for many years due to cuts to social security and benefit rates being frozen, whilst bills have risen year on year. I will be turning off lamps and not charging items, but still retweeting links on social media on the day and asking for people’s support for the protest.

If people look at our history over the centuries, we only have the rights we have because we’ve fought back; from the Tolpuddle Martyrs’ fight for the right to form a union, to the suffragettes’ campaign for the vote for women, through to the Dagenham women and the fight for equal pay, and even the poll tax campaign to abolish the poll tax which helped to bring down Thatcher’s government in 1990. It’s important to stress that people bled, died, and fought back for holiday pay, sick pay, weekends off, maternity pay, health and safety at work, the NHS, and the Welfare State were fought for, which is why it’s important to protect them because these are under attack and the government wants to take us back decades where we have no NHS, no Welfare State and no workers’ rights.

Campaigning makes a difference. When you get an accessible lift installed in a rail station, it means all groups in society can access the rail station and go about their lives. It’s about supporting your community fighting for better rights and making a difference to make a better world.

Over time, if millions get involved and hit the companies where it hurts, it can give the energy companies and the government a clear message that we are not going to put up with corporate greed. We’ve had enough, the loss of money will impact on their profits, the more we do this the better chance we have of hurting their profit margins. We’ve got to use every campaign tactic we have to push back against conglomerates and the government. That’s why I campaign. That’s why I’m an activist. That’s why I’m supporting #BigPowerOff.

3 thought on “Voices from the margins: Paula’s story”