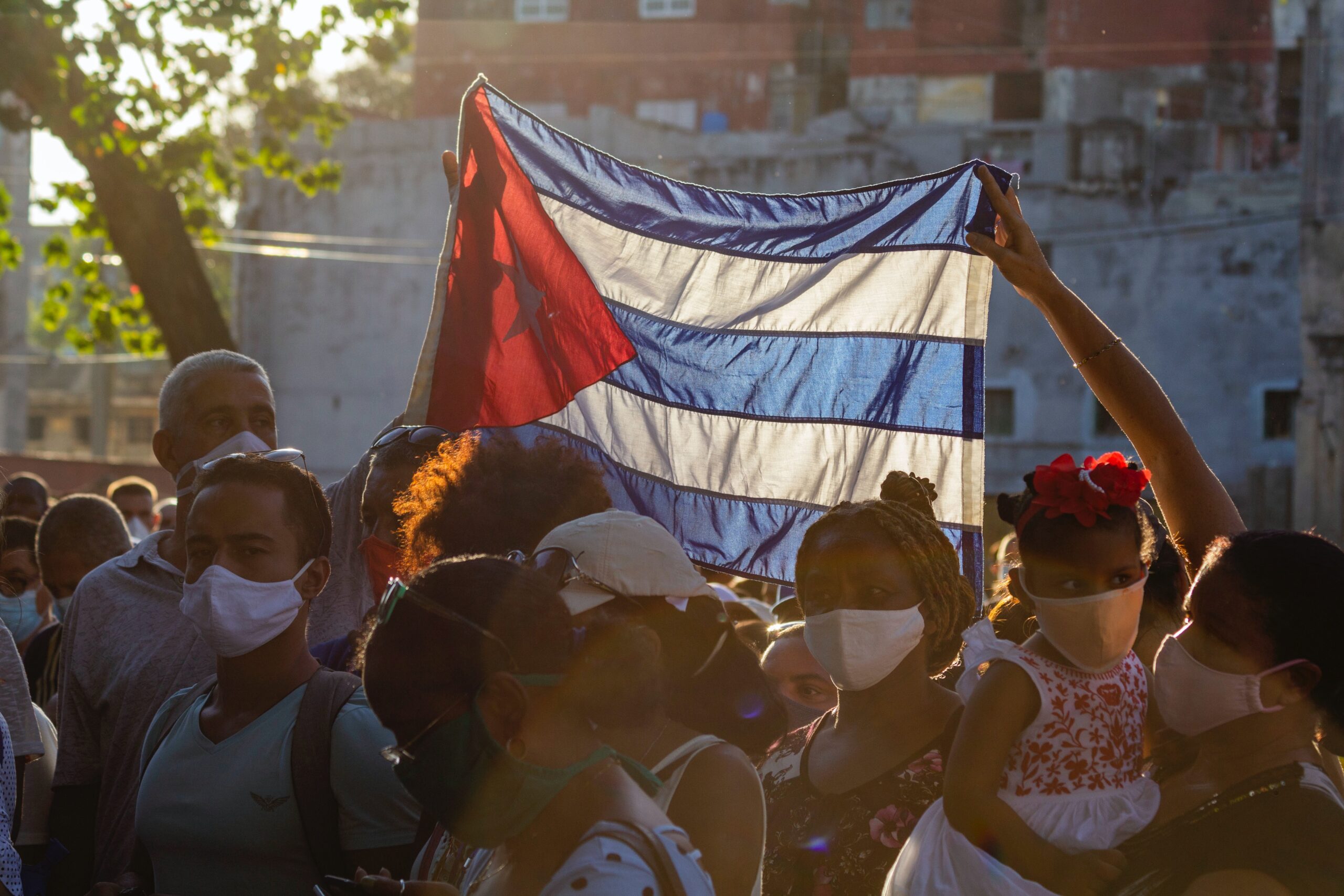 WHILE it is reported that the US are actively whipping up support for protests against the Cuban government, Cuban President Miguel Diaz-Canel, has stated the protests are illegal and will be treated as such.

It comes as no surprise to anybody who has followed Cuba-USA relations that the US would interfere in such a manner; the country has a long and bloody history of interfering in the governing of other countries, especially if they perceive those governments as being ‘communist’.

In a speech on Sunday, Diaz-Canel specifically accused the US embassy of playing a role in fomenting protests. “Their embassy in Cuba has been taking an active role in efforts to subvert the internal order of our country,” Diaz-Canel said. “US diplomatic officials meet frequently with leaders of the counterrevolution, to whom they provide guidance, encouragement, and logistical and financial support.”

…policy of economic suffocation to provoke social unrest in the country

Over the last few months many Americans on social media have shared images of the July protests against the Cuban government, and while there was a fairly small protest, many of the images shown were actually of pro-government marches of people angered by American interference. President Diaz-Canel  blamed these anti-government protests on the US, accusing them of pursuing a “policy of economic suffocation to provoke social unrest in the country.”

And yet still we see Juan Gonzalez, a top adviser on Latin America to US President Joe Biden, telling news agency EFE last week that the United States would respond if anti-government protesters were again jailed in the forthcoming march, referring to those who were jailed in July.

“Those individuals who are involved in violating the fundamental and universal rights of the Cuban people… we have made it very clear that we have every intention of responding,” Gonzalez said. But Cuban authorities said those arrested in July were guilty of crimes including public disorder, resisting arrest, and vandalism. And what business is it of the USA’s anyway?

The US has maintained a blockade against Cuba for almost 60 years, but since January 1959 has resorted to all kinds of actions to subvert the constitutional order and overthrow the government. Various US administrations since that of JFK have also sought to discredit Cuba’s achievements in many spheres, but there still remains much support worldwide for the Cuban people and its government.

Since the failed invasion of Playa Giron (the Bay of Pigs) in April 1961, whose participants were trained and armed by the CIA, sanctions and assassination attempts carried out by the US have all failed to take down the Cuban government, though the sanctions have undoubtedly had a negative effect on the economy.

Yet it is worth noting, for those not aware, that, despite the problems caused by US-led sanctions, the country has, according to The World Bank, the best education system in Latin America and the Caribbean, not surprising given it allocates the highest share worldwide of its national budget to education. Its healthcare is also pretty amazing. Free for everyone; infant mortality lower than many countries including the US; wonderful care in the community run by teams including a doctor, nurse and often a social worker; highest ratio of doctors to population by quite a significant amount; and, since 1963, Cuba has been sending their doctors on foreign missions, often coming to another country’s aid in times of disaster.

At an international seminar held by the Mexican Labour Party a week ago, more than 130 leaders from 45 countries supported the Cuban Revolution and condemned the US blockade. The annual seminar approved a resolution on the heroic struggle of the Cuban people against systematic attacks from the United States, and their historical resistance to an economic blockade of 60 years, the longest recorded against a country. Numerous resolutions by the United Nations General Assembly have indicated that the blockade is against international law.

The Mexican President had also called for an end to the US embargo earlier this year as the protests were taking place in Cuba. And last month President Andres Manuel Lopez Obrador reiterated this, appealing to the US to end sanctions against Cuba. Obrador said that the entire country should be declared a World Heritage site for its “example of resistance” to the world.

In praising the Cuban resistance to outside influences, he said, “We can agree with the Cuban Revolution and its government or not but to have resisted 62 years without subjugation is an undeniable historic feat.

“Consequently, I believe that the people of Cuba, for their fight in defence of the country’s sovereignty, deserve the prize of dignity”, he added.

Viva Mexico! Long live the friendship between Cuba and Mexico

President Miguel Díaz-Canel responded by saying Cuba would always remember Mexico’s solidarity, saying “Cuba will always remember your expressions of support, your permanent call for the lifting of the embargo”. Díaz-Canel even went on to speak about the significant cultural exchange between Cuba and Mexico and added, “Under the fire of this total war, the solidarity of Mexico with Cuba has awakened in our people greater admiration and the deepest gratitude… Viva Mexico! Long live the friendship between Cuba and Mexico”. .

The good news is that support for the island nation is increasing. Only last month the Bridges of Love project, along with other groups, took actions in more than twenty cities in nearly a dozen countries to support Cuba and to condemn the US economic, commercial and financial blockade. And just last week, after completing several kilometres of their walk from Florida to Washington DC, the members of this initiative promoted by Cuban-American professor Carlos Lazo met with the group of Veterans for Peace to explain what this initiative consists of. They spoke about how the sanctions against the Cuban people affect their daily lives and gave examples of how the blockade prevents the Cuban government from purchasing the most basic things for its citizens.

It is heartening to see more and more people becoming aware of the damage the US government inflicts on not only Cuba, but other countries such as Venezuela where they attempted another coup with the aim of putting Juan Guaidó in power, Iran of course, Nicaragua – where they first intervened in 1909 and have only left the people in relative peace when they have approved of the government – and many more.

The US often cites human rights abuses as their reason for sanctions, which many may see as slightly hypocritical given the daily abuses on its own citizens. Amnesty International documented 125 separate incidents of unlawful police violence against protesters in 40 states and Washington DC between 26 May and 5 June last year alone. Not only by police but also the National Guard.

Then there is the appalling treatment of immigrants in its detention centres where, during a pandemic, ICE (Immigration and Customs Enforcement) failed to adequately provide soap and sanitiser or introduce physical distancing, and continued to transfer thousands of people unnecessarily between immigration detention facilities. And of course the continuing discrimination against indigenous peoples, LGBTI people, the systemic racism, people still being held at the now infamous Guantánamo Bay, and of course its unlawful killings of tens of thousands of innocent people with drone strikes around the world in violation of its obligations under international human rights law and, where applicable, international humanitarian law.

The USA: against all human rights abuses. Oh, except those in their own country or countries with right-wing governments (excluding the ones who have oil they want).

Hypocrisy thy name is the United States of America.