Unions under fire from Truss 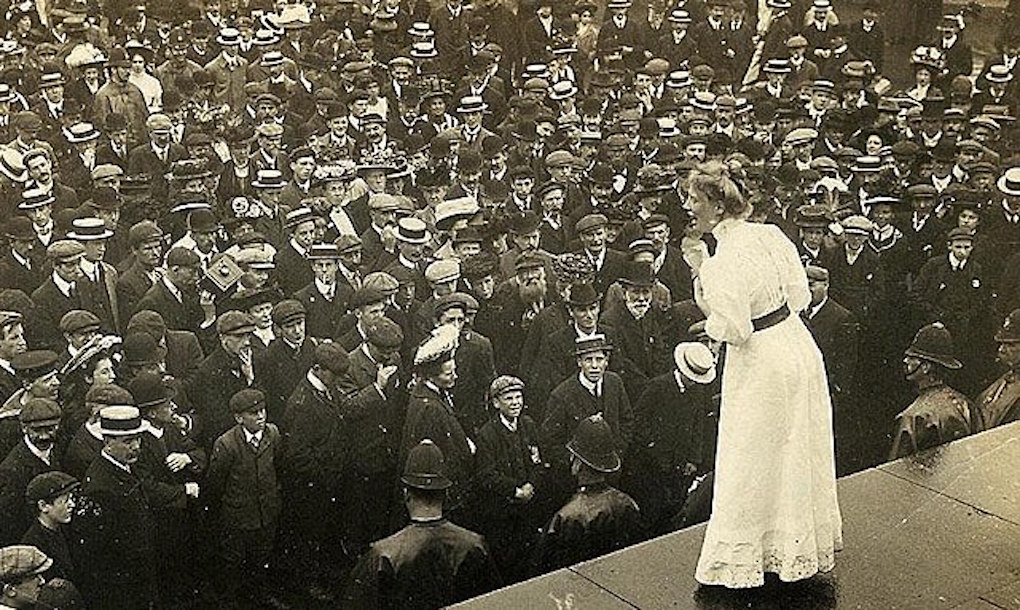 Unions, and strikes, are a part of our history and must remain so. Here we have Mary Macarthur of the National Federation of Women Workers in 1908 at Trafalgar Square when the women at a factory in Tooting went on strike over wage cuts. Photographer unknown. Public domain.

THE bookies’ favourite to be Britain’s next PM, Liz Truss, has angered unions with her promise to crack down on trade unions and make it harder for strikes to take place. The Foreign Secretary has proposed sweeping reforms to UK trade union laws which would guarantee minimum services during strikes and raise the threshold on the number of workers needing to take part in ballots on industrial action.

Truss also said that she would raise the voting participation threshold required by unions to approve walkouts by their members. At present, unions must secure a 50 per cent turnout of a company’s workers for a strike to be legal. In addition, employees in ‘important public services’ have to obtain an active vote from over 40 per cent of the entire workforce. But the leadership hopeful has pledged to change the law to require 50 per cent of the entire workforce to vote yes in order for a strike to go ahead. This would apply to all places of work not just essential public services.

Outlining her plans, which unions across the UK have rejected, Truss said: “We need tough and decisive action to limit trade unions’ ability to paralyse our economy. I will do everything in my power to make sure that militant action from trade unions can no longer cripple the vital services that hard-working people rely on.”

She promised to limit the number of times workers can stage walkouts in the six months after a successful ballot. She would also scrap tax-free payments to striking workers. And she pledged to enact the minimum service commitments within 30 days of entering Downing Street. Even Boris Johnson’s government, who had the proposal as part of its 2019 election manifesto, had said it would take six to 12 months for parliament to pass the legislation.

We’ve been here before. In 1972 the Tory government out to restrict the trade unions and impose wage cuts. But early in ’72 the miners went on strike and the Tories were forced to concede defeat. They then turned their attention to the dockers and victimising individual militants. Five London dockers were jailed by the government’s National Industrial Relations Court (NIRC) for illegal picketing. This brought out rank-and-file members throughout the country and it is estimated that about 90,000 workers took part in industrial action in defence of the dockers. The Pentonville Five, as they became known, were released from Pentonville Prison fifty years ago yesterday. Never believe anyone who might tell you that trade unions have little power. It’s also worth noting that the Labour Party then, as now, was against the strike action.

The response from unions has been quick, unsurprising and firm.  Frances O’Grady, general secretary of the Trades Union Congress, criticised Truss’s proposals, saying the right to industrial action was an important British freedom. “Threatening the right to strike means working people lose the power to bargain for better pay and conditions,” she said. “Instead of taking potshots at working people and their unions, the candidates should come up with plans to get wages rising again. That’s how to deal with the cost-of-living emergency.”

Scottish Trade Union Congress (STUC) general secretary Roz Foyer said it was revealing that Truss chose to attack working people in “a pathetic, desperate attempt to curry favour with her acolytes”. Foyer added: “Workers across Scotland are suffering from endemic low pay, unaffordable energy costs and near-record inflation. Workers didn’t cause this crisis, the Tories did. Her proposals will only increase support for industrial action as it becomes clear that, unable to manage a crisis of its own making, the Tories resort to type and blame working people for their own economic failures.”

RMT general secretary Mick Lynch reiterated this when he said: “The proposals by Liz Truss amount to the biggest attack on trade union and civil rights since Labour unions were legalised in 1871. Truss is proposing to make effective trade unionism illegal in Britain and to rob working people of a key democratic right”.

And this really is the crux of the matter – robbing working people of their rights. Be under no illusions, this is a class struggle, and we have nobody other than the unions speaking up for us. We must stand with them or we all lose.