TUSC – worth your vote? 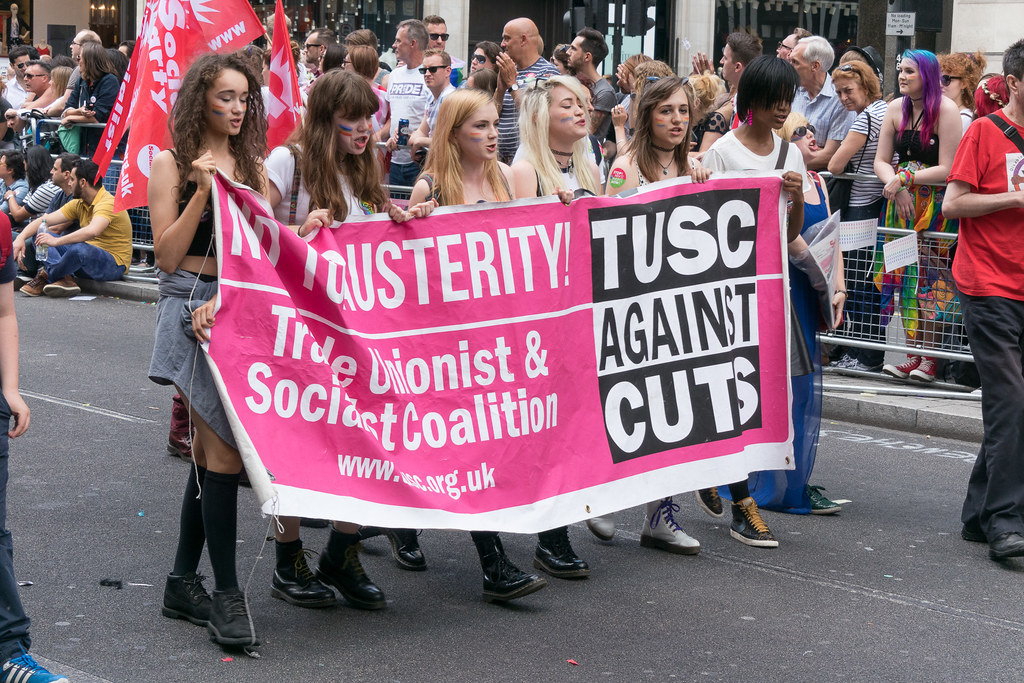 TUSC against CUTS by patrickdevries 2003. Licensed under CC BY-NC-SA 2.0

MORE than 250 candidates from the Trade Unionist and Socialist Coalition (TUSC) will appear on ballot papers around the country in three weeks time, and those disillusioned with the Labour Party may well be looking to the TUSC as one of the few alternatives to the main establishment parties who have let us all down in various ways over the past years.

So what does the TUSC stand for and why should you give them your vote? Well, with the current energy crisis and the long-standing but worsening cost of living crisis, voters will be pleased to know they are for public ownership. Their policy states they will “stop all privatisation, including the Private Finance Initiative (PFI) and Public-Private Partnerships (PPP). Bring privatised public services, industries and utilities back into public ownership under democratic control, with compensation only on the basis of proven need”.

They also argue to re-nationalise all rail, bus and ferry services in order to build an integrated, low-pollution public transport system. Taking Royal Mail back into public ownership is another of their policies, and one which most people, of any party, would welcome. It was privatised in 2013 under the Conservative/Lib Dem coalition, and since then thousands of jobs have been lost while shareholders have made hundreds of millions in profit. The privatisation was slammed at the time by the Communication Workers Union, whose then Deputy General Secretary (now GS), Dave Ward, said: “This fire sale nails the lie that the Tories stand up for the interests of ordinary people”. He’s certainly not wrong there but who other than the foolish or gullible have ever believed the Tories in any way represent ‘ordinary people’?

He added: “By their actions today they have made it abundantly clear that they are only interested in privatisation dogma and making the rich richer – even when their actions place public services at risk. Bring prisons, probation, and all other parts of the justice system back into the public sector.” And we have certainly seen in the intervening years how the Tories have tried to profit from almost everything, including the latest ill-thought out scheme – the privatisation of Channel 4.

Bring all branches of justice system into public sector

Dave Ward’s last sentence above is interesting in that it relates to another of the TUSC’s policies, that of bringing prisons, probation, and all other parts of the justice system back into the public sector. Probation services were largely brought back to public ownership last year, after the disastrous outcome of Chris Grayling’s privatisation changes in 2014, where the probation sector was separated into a public sector organisation, the National Probation Service (NPS) which managed high-risk criminals, and 21 private companies responsible for the supervision of 150,000 low to medium-risk offenders. As with so many of the Tories’ privatisation schemes, the private providers had to be bailed out by more than half a billion pounds.

Once again the Government has the money to spend when it comes to helping private companies but not when it comes to injecting money into the NHS or increasing benefits to prevent people from starving or freezing to death. Because that is actually a reality for many. And here also, the TUSC has plans. Their policy states they want a high quality NHS under democratic public ownership and control, and an end to council estate sell-offs. They wish to build high-standard, eco-friendly, affordable council housing.

A policy which will have every socialist cheering is to tax the rich! The TUSC wants a progressive tax on rich corporations and individuals and an end to tax avoidance, which sees the wealthy avoiding paying tax, while those of us less fortunate are in no position to transfer shares, invest in companies with a low tax rate, hide our money offshore or indeed take any of the myriad of steps the wealthy do to avoid paying their fair share of taxes. And this is legal! Tax evasion is not, but tax avoidance is.

The TUSC also wants to do what should have been done under Blair (he of the three election wins as centrists constantly remind us – yippee) which is to repeal the draconian anti-trade union laws which were brought in by Thatcher after the historic Miners’ Strike of 1984. They also want to see an end to zero hours contracts, and instead for workers to have guaranteed hours and full employment rights. The fact that we’re even talking about having to fight for these things really should be a wake-up call for everybody; if you are employed, should it not be a right to know how many hours you are going to work?

They have great policies on measures to support disabled people, pensioners, and – also of vital importance now – on climate change. You can read their policies here and go to their home page to find out more about candidates and how you can support the TUSC.

You may just regain that feeling of hope we had a few short years ago.