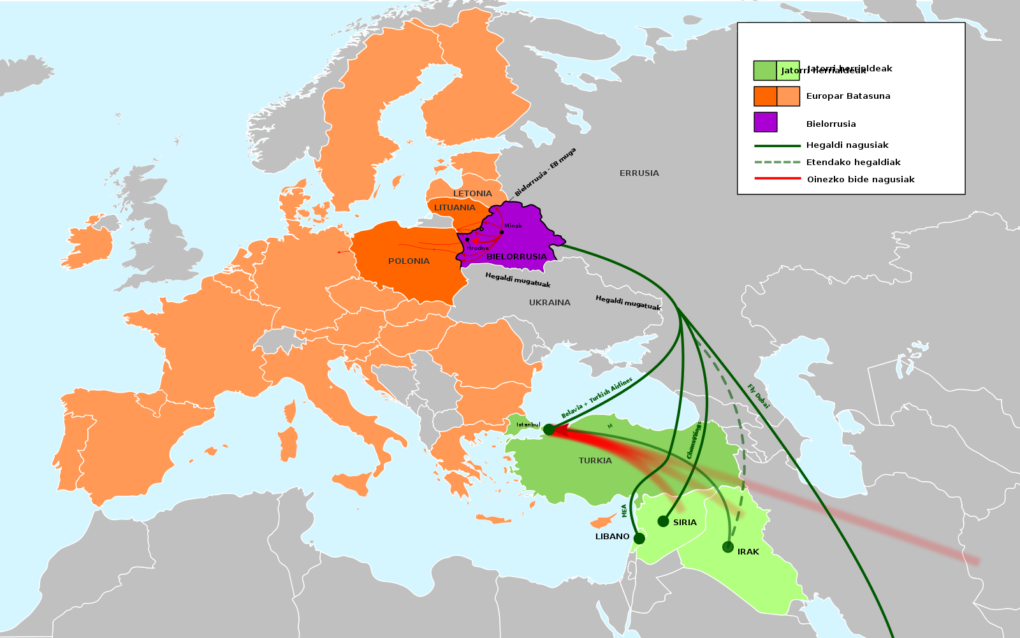 This file is licensed under the Creative Commons Attribution-Share Alike 4.0 International license.

AS a small team of British troops are deployed to the Poland-Belarus border to help with the ongoing refugee crisis yet another body has been found in woodland near the village of Wolka Terechowska, bringing the death toll to at least ten according to aid workers.

Polish police said the exact cause of death of the young Syrian man could not be determined but most of the refugee deaths at the border have been the result of hypothermia as the refugees endure freezing temperatures in the hope of finding better lives inside the EU.

The refugees are mainly from Iraq, Syria and parts of Africa, so you might ask how they have ended up on this border. Usually, asylum seekers from these Middle Eastern countries who want to come to Europe do so by making dangerous boat trips from northern Africa across the Mediterranean before trying to enter via western Europe but, according to the EU, Belarus president, Alexander Lukashenko, has provided them with an easier route by offering them Belarusian tourist visas, and then helping them cross the border into one of the three EU states it borders – Poland, Lithuania or Latvia.

But Lukashenko said yesterday that Belarus was working to repatriate the refugees who have gathered on its border with Poland, in an apparent move to defuse the crisis ahead of an EU meeting over new sanctions on Minsk. Minsk has faced several rounds of measures in response to Lukashenko’s violent crackdown on mass street protests in the wake of last year’s presidential elections and his decision to ground a Ryanair flight earlier this year over Belarus to detain an activist.

But these people, I must say, are very stubborn. No one wants to return

According to the state news agency Belta, Lukashenko said “Active work is underway in this area, to convince people to please, return home. But nobody wants to go back.”

“But these people, I must say, are very stubborn. No one wants to return,” the president said. “They do not have housing there, they understand that there is nothing to feed their children.”

At Dubai’s request Iraqis, Syrians, Yemenis and Afghans were banned on Sunday from incoming flights from the United Arab Emirates after Minsk was accused of bringing in refugees to send on to Europe. The move came after Belarus’ national airline Belavia on Friday banned Syrians, Iraqis and Yemenis from incoming flights from Turkey at Ankara’s request. And yesterday the Iraqi government said it was organising a repatriation flight for this Thursday for its citizens stuck on the Poland-Belarus border but that this would be on a voluntary basis only.

But while the British send in troops – albeit ostensibly to help fortify the border, according to the  Ministry of Defence which said the mission is meant to provide “engineer support” rather than police the border – others are calling for aid for the refugees. “I’m calling on the government of the Republic of Poland to allow professional non-governmental institutions to operate in the border zone,” said Michal Sutyniec, of the Polish network of NGOs Grupa Granica. He added: “So that I would not have to leave a five-year-old girl with her mother in the forest for the night only because it is the best of all the bad variants that are available.”

It is not only organisations. Locals living in the Bialowieza forest, on the border between between Poland and Belarus, are offering the refugees food and sometimes shelter, warm clothes and sleeping bags and underground networks have developed, with many locals being critical of the Polish government for failing to meet the needs of the refugees.

The Kremlin also weighed in yesterday, saying that Russia was ready to mediate in the refugee crisis and that Moscow was already doing so to an extent. Kremlin spokesman Dmitry Peskov, when asked yesterday how Russia could contribute, said: “exclusively as a negotiating intermediary, which is partly (already) happening.”

We are all human beings

Governments, our own included, often talk of being ‘overrun’ with refugees/migrants and how this is somehow an awful thing, yet quite apart from the fact that many of these are fleeing wars we have had a hand in so surely we have a responsibility to help them, there is the undisputed fact that if they are allowed to work and make money these people stimulate economies, bringing a net benefit, and while their cultures may be different that should be seen as a positive benefit, they will only enrich the cultures of the countries in which they settle.

The most important thing to remember, however, is that they are human beings. Human beings, just like you and me, just trying to live their lives. Only these refugees are prepared to travel thousands of miles, put themselves in dangers most of us can’t even imagine, for want of that better life. So try to envision what they must be fleeing from.

I need to earn a living so if readers could each donate just £1 it would help me incredibly. Thank you. https://www.paypal.me/susiejgranic