‘Tis the season to confer… 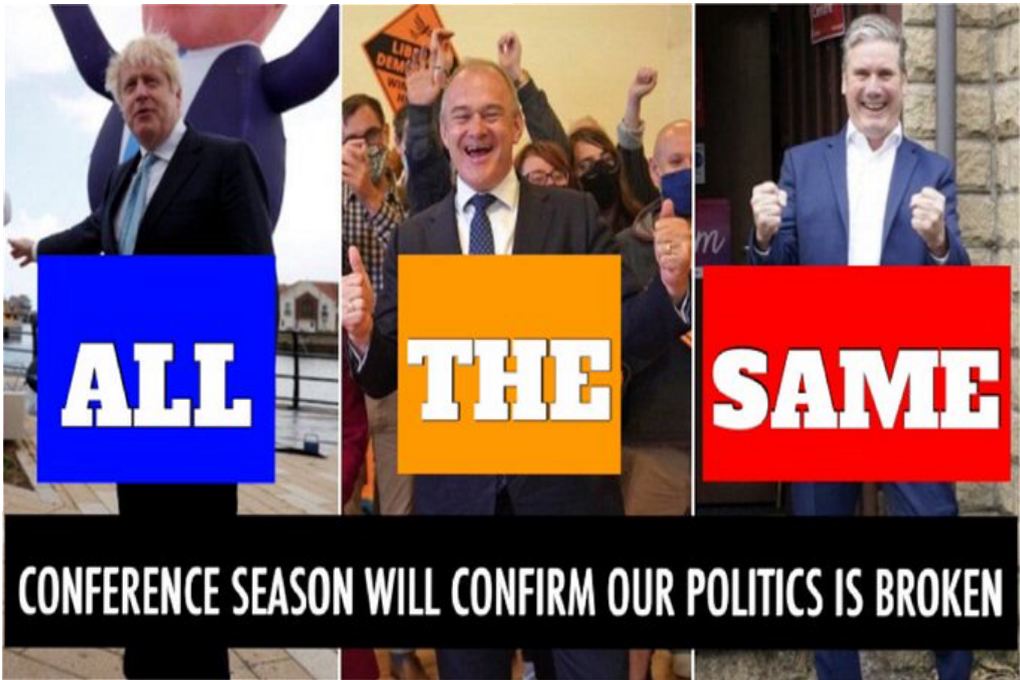 The season of the political party conference has arrived. So I am going to spend the next 1500 words giving you my take on the annual political jolly.

First up is the Liberal Democrats. Remember them?

They’ll be holding their conference online, I would assume this is because nobody wants to attend a social club to eat a few egg sandwiches while Sir Ed Davey talks about Pilates and leather sandals.

I remember contacting Lib Dem HQ during the coalition government years. The conversation went something like this…

Me: “Hello, could I possibly get a copy of the Liberal Democrats manifesto please?”

Me: “Yes I know that, I’m just after a copy of your manifesto.”

This year’s Tory party conference will be held in Manchester from October 3rd – October 6th.

This will be the Tories normal opportunity to define themselves by what they oppose.

Fringe events will include Young Conservatives demanding fox hunting should be included in the national curriculum, and the Michael Fabricant appreciation society will be calling for the death penalty for shoplifters and uninsured drivers.

The fringe stuff is usually where you will find the controversial comments. For example, this from the 2019 Tory gathering – a fringe event organised by the think-tank, Policy Exchange – included Labour Party member, Trevor Phillips, joking about being named ‘Islamophobe of the year’, another panellist arguing Islamophobia doesn’t really exist, “Muslim victimhood”, and another two panellists defending Boris Johnson’s infamous comments comparing veil-wearing women to “letterboxes” and “bank robbers”.

And what do you think the name of this fringe event was?

“I am truly ashamed of my Party and fear for Muslims under this government.”

“I feel sick to my stomach tonight to see the Party I chaired sink to such depths. Where British Muslims have become a convenient scapegoat for populism, a butt of insulting language to increase poll ratings and an event on Islamophobia is an opportunity to demonise Muslims.”

But sandwiched between the Liberal Democrats online conference – that will be competing with GB News for the lowest ever daytime ratings – and the Conservative Party conference – where they will be patting themselves on the back for turning Britain into a plague-ridden boil of an island where the official currency is soon to be a McFlurry – is the Labour Party conference, to be held in Brighton.

I love Brighton. I have nothing bad to say about the city or its people, and I don’t know any puns that will Brighton your day.

I have been lucky enough to be invited to a couple of Labour Party conferences. Have I attended? That would be telling.

I wouldn’t want to ruin this bizarre, although rather amusing piece in the Guardian by Marina Hyde from 2018 that said:

“Shadow ministers still tour those exhibition stands with an aide, who ensures a photo is taken of them looking caring. But probably all the politician really wants is to get retweeted by a Corbyn outrider account like @Rachael_Swindon”

To be honest, I really don’t think that many shadow ministers wander around Labour conference, thinking, “Never mind Jeremy’s big speech, I just want a cheeky retweet from the Swindon gobshite”.

Describing her conversation with one delegate, she said:

“Everyone at conference now has their face down in their phones much of the time. You want to see what people are saying, don’t you?” one middle-aged delegate told me. People not at conference? “People like … people you follow, I suppose. I’ve seen Owen Jones here at things, and Ash from Novara. [Ash Sarkar, senior editor at independent media organisation Novara Media]. But I don’t think Rachael Swindon would be. Maybe she is, I don’t know. I just follow on here.”

She went on to say…

“If @Rachael_Swindon one day claimed to not really be feeling it as far as Keir Starmer was concerned, would the shadow Brexit secretary swiftly be found in the back of a car somewhere in the weeds?”

Marina, I’m definitely not feeling it when it comes to Keir Starmer.

The same conference was memorable for other reasons, and I’m still not sure if everybody realised that just one slightly altered speech, delivered on the main stage, would be the beginning of the end of the Corbyn era.

This was Keir Starmer’s big moment.

Half of the hall were horrified and the other half delighted as he amended his Brexit speech to include “Nobody is ruling out Remain as an option”. This wasn’t included in the speech seen by the leadership.

This was Keir Starmer destroying the hard-earned trust of millions of Leave voters, gained by Jeremy Corbyn just one year earlier, at the 2017 general election.

It was a gift for the predominantly pro-Brexit press, and the perfect opportunity for them to destroy the eight point poll lead achieved by Jeremy Corbyn and make him out to be a traitor to the working classes.

They failed to get rid of Jeremy in 2016 (remember Owen Smith?), they failed in 2017, following Labour’s general election gains, so Starmer and his saboteurs were more than happy to throw the 2019 election if it meant they could carry out the socialist-cleansing of the Labour Party that we still witness to this day.

Other conference highlights include a Blairite strategist/spinner sending me his hotel room number, following me tweeting several photos of him doing random things around the conference hall. It was a bit of banter, rarely witnessed across the political divides these days.

But I still think one of the best moments at a Labour Party conference in recent years was witnessed in 2018 when Colin Monehan was asked to leave the main stage when his speech time expired.

Passions were running high when Mr Monehen refused to leave the stage. The motion being debated was calling for an end to the blockade of Gaza and an end to supplying the Israeli government with the bombs that are used to kill innocent people.

“My time is not up, I’m speaking for the Palestinian people… If you want me off, you better send an army because East Enders, like Palestinians, don’t go down easy.”

Mr Monehen asked the conference, in Liverpool, to imagine there were “two babies being born in Jerusalem – one to Palestinian parents, the other to Israeli parents”.

“I want you to realise that this motion is about wanting those babies to have a better future than the futures filled with pain, suffering and hatred…Let’s put their futures on a different trajectory to the one that has been mapped out for them.”

“I want us to say this to every Palestinian:, ‘We have heard you calling from the darkness and we cannot and we will not ignore you or your tragedy.”

The Labour Party led by Jeremy Corbyn was proud to be a vocally supportive friend of the Palestinian people.

Keir Starmer’s inability to unequivocally condemn the indiscriminate bombing of Gaza was a sign of where his middle-of-the-road, both sides are to blame, weathervane politics was heading.

Conference really isn’t just about speeches on the main stage, or the exhibition stands, or the various media outlets dotted around here and there. Some of the fringe events are genuinely interesting, where like-minded individuals can come together and talk about the politics that they are so passionate about.

You’ll also find incredible events running alongside the main conference such as TWT (The World Transformed).

One of the speakers, the very impressive Zarah Sultana said:

“Every year The World Transformed provides a crucial space for activists from across the UK and beyond to discuss and debate socialist ideas, learn new skills and collectively shape the future of our movement. I’m looking forward to being part of the conversation at this year’s festival.”

That sounds more worthwhile than listening to Streeting, Nandy, Reeves and Starmer churn out one meaningless word after another to an audience full of Manic Keith Preachers and Blairite relics.

You can just imagine Streeting singing the praises of the warmonger Blair, whilst you desperately try and hold down your £10 coffee and sandwich ‘deal’.

As you can imagine, I’ll be keeping an eye on the Conference season. Not in the hope of hearing a groundbreaking policy announcement from any of the main political leaders, and Ed Davey, but more in the expectation of a senior Tory saying something dreadful, and Keir Starmer telling everyone about his recent 14,000 word essay, setting out his vision for the Labour Party, and pressing the reset button on his ‘leadership’.

You should never be so high and mighty you can’t listen to somebody else and learn something from them. Leadership is as much about using the ear as using the mouth.