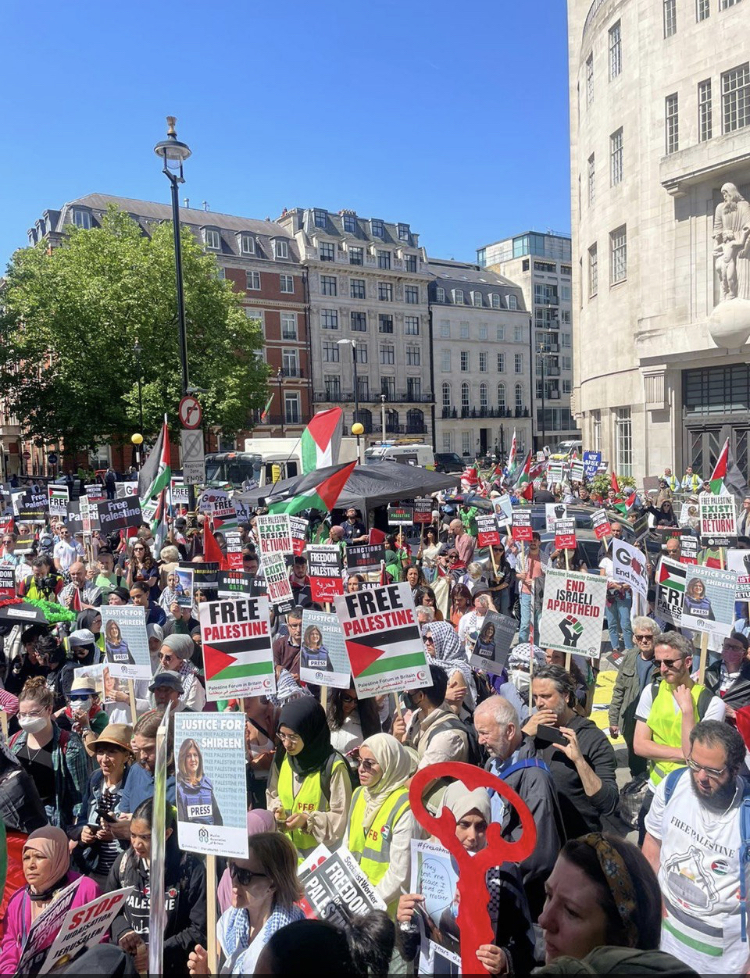 The murder of Al Jazeera’s veteran reporter, Shireen Abu Akleh by Israeli forces, and the subsequent Israeli attack on mourners at her funeral, highlight the need for continuing solidarity with the Palestinan cause. Critical Mass writer and editor Ann Newton-Marcial has written before about her activity in the Eastbourne branch of the Palestine Solidarity Campaign. Today we thank her PSC branch chair, Sarah Kishawi, who has sent us this report of Saturday’s national demonstration in London and provided the pictures.

Tens of thousands of people came together in London on Saturday, to stand in solidarity with the oppressed Palestinian people and to acknowledge 74 years of the Nakba. ‘Nakba’ meaning catastrophe in Arabic, refers to the displacement of over 750,000 Palestinians from their homes, the killing of 13,000 more and the eradication of over 500 Palestinian villages, in order to expel the Palestinians and also to prevent their return. It was carried out by Zionist militias in 1948, as they pursued their goal of creating an exclusive Jewish state.

The goal has not changed, but the steadfastness of the Palestinian people has meant that Israel has had to stoop ever lower trying to achieve this goal. The Nakba continues to this day, with Palestinians living under an apartheid regime, denied their most basic of human rights, treated as an inferior racial group, dispossessed of their land and refused their right of return.

These tens of thousands of supporters, young and old, all on the right side of history, came from far and wide to show their solidarity and to march from the BBC headquarters to Downing Street.  Many were holding pictures of the reporter Shireen Abu Akleh and expressing outrage at her murder by Israeli forces on Wednesday. 55 blue press flak jackets were held up at Downing Street, to commemorate the 55 journalists murdered by Israel since 2000. Israel continues to kill with impunity. So far this year, 10 Palestinian children have been murdered.

Chants of “No justice. No peace” and “When Palestine is occupied, resistance is justified” were heard loudly and clearly, and the feeling of solidarity was strong and unifying.