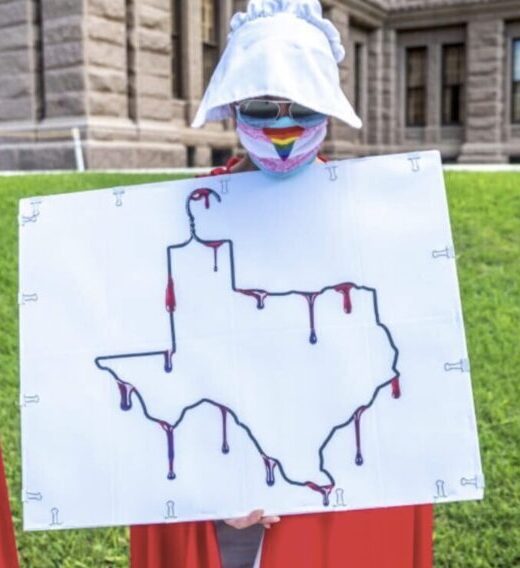 WOMEN, and men, are justifiably angry and, in many cases, scared as a strict new abortion law came into effect in Texas after the Supreme Court voted down an emergency appeal to block it.

Despite pro-choice protests from people across Texas, the new SB8 law banning abortions from as early as six weeks has been passed in the state.

One of the most restrictive American laws

The so-called Heartbeat Act, which came into effect on Wednesday, despite the 1973 Supreme Court decision that established a constitutional right to the procedure (known throughout the world as Roe vs Wade), is one of the most restrictive American laws and is also imposed in the states of Georgia, Mississippi, Kentucky and Ohio.

The law prohibits women from getting an abortion once a foetal heartbeat can be detected, which is usually around six weeks and often before women even know they are pregnant, and gives citizens the right to take legal action against doctors or anyone else who helps a woman terminate a pregnancy.

The American Civil Liberties Union (ACLU) of Texas called attention to how restricting this could be in a statement where they said: “Approximately 85 to 90 percent of people who obtain abortions in Texas are at least six weeks into pregnancy, meaning this law would prohibit nearly all abortions in the state.”

No allowances for rape and incest

The new law does not allow for abortions in the case of rape and incest, only if the mother’s life is in danger, and of course that is up to the attending doctor to decide.

The part of the bill which is just as frightening and reprehensible is that anybody, from a private citizen to a doctor, even a non-Texan resident, can actually sue anybody who may help women to have an abortion.

Kelly Hart, the senior director of Public Affairs at Planned Parenthood of Greater Texas, says SB 8 is unique in this respect.

“This is unique and dangerous. Basically, allowing citizens who, you know, in most cases won’t really know the medical history of the person and the people involved, interfering with private medical decisions in this way.”

Plaintiffs who may have no connection to either the patient or the clinic may sue and recover legal fees, as well as $10,000 if they win.

This bill will create nearly insurmountable obstacles for certain vulnerable groups, abortion providers have said. Among them teenagers, who often don’t realise they are pregnant until later in a pregnancy; low-income people, who need to find approximately $550 to cover the cost of the procedure; and people of colour, including undocumented immigrants.

According to the Guttmacher Institute, a pro-choice research organisation founded in 1968, about 70 percent of abortions in Texas in 2019 were provided to women of colour.

This assault on women’s rights could also indicate that the Supreme Court’s six conservative justices are prepared to attack established legal precedent that has protected reproductive freedoms nationwide, Roe vs Wade.

Women in the USA are right to be angry and frightened as more of their rights are eroded.