The Rich are Eating the Rich 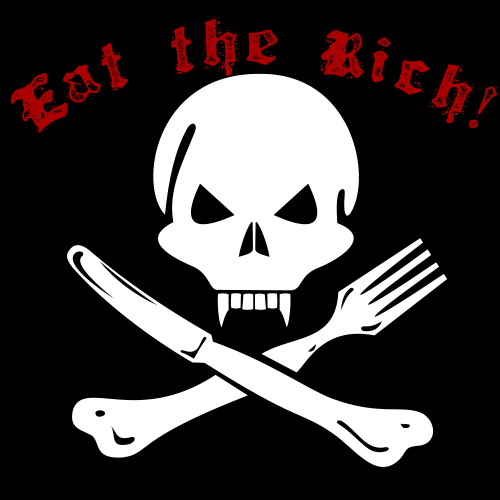 Rishi Sunak, the Chancellor, will unveil the UK’s 2021 Autumn budget. We will only know what this budget will look like and actually means for the UK once we have the detail later today.

Of course, leaks have come thick and fast in an attempt to hype up the supposed positives while obfuscating the truly insidious nature of the government agenda.

Universal Credit uplift and furlough wage support have both been rescinded. The national insurance increase of 1.25% takes effect in April 2022. All three of these, directly targeted at and affecting the poorest and most vulnerable in our society, are clear indications of the callous and cruel methods this government employs. They ensure the wealthy remain unaffected and virtually untouched by the cost and take no responsibility for contributing to the society that enriches them.

It appears not all those getting fat off the backs of the many find it so easy to close their eyes to situations the majority in the UK find themselves constantly dealing with.

Millionaires ‘fighting’ for the poor?

Sending an open letter to the Chancellor on the eve of the autumn budget, a group of 30 UK millionaires have called on Rishi Sunak to address the economic imbalance of the current tax system. A system that places a deeply unequal burden on working people.

Their radical proposal to enact such a demand is to tax the wealthy more, reasoning that they, the wealthy, can afford to pay it.

In their letter, they state that:

The cost of recovery [from the pandemic] cannot fall on the young or on those with lower incomes. There are many of us – people with wealth – who will support a more progressive system of taxation, and we urge you to do the same.

The group suggests immediately increasing taxes on the rich to prevent next year’s 1.25% increase in national insurance. They also have called on the government to look at any policies, such as the equalisation of capital gains with income tax, a review of property tax, and the introduction of a net wealth tax as ways to begin to tackle the overwhelming inequality in UK society.

Multi-Millionaires ‘fighting’ for the poor?

These UK millionaires calling for immediate change are part of the Patriotic Millionaires movement. This group are based primarily in the US but their members span the globe and consist of some of the wealthiest on the planet.

The claim of the group is they wish to find a way to provide society with a way to close the ever-growing gap between rich and poor and they state:

“When deciding on how to meet the financial gap, look to us. Repairing our country is more valuable than growing our wealth.”

Since the pandemic began and, as the cost-of-living rises to crisis levels, hitting households, but particularly the poorest, in the UK, the combined fortune of UK billionaires has increased by 22% to £597 billion.

In what to many would seem a ‘common sense’ statement hardly requiring a financial wizard, multimillionaire former city trader, Gary Stevenson said:

“We can’t expect to have a strong or stable recovery if the fiscal burden of it is placed on our care workers, street cleaners and teachers – key workers who deserve better – while we don’t tax the rich.”

Can these proposals work in practice?

The usual refrain from the right and their capitalist paymasters when presented with any progressive economic policy such as that from the Labour Party in 2017 is “It just wouldn’t work. The numbers don’t add up. It’s just a pipe dream.”

Research by Greenwich University shows a remarkably different story. When Greenwich studies those in the top 1% of UK households, the studies show it could generate at least £70 billion a year! However, this is the ‘low’ figure.

There is a range of potential gains to be made from a progressive tax on the top 1%. This is not due to calculation errors, these are accounted for. The range is due to the amount of tax evasion accounted for! The range of revenue for a tax evasion rate of ‘only’ 50% is £70 billion. However, the revenue when tax evasion is curtailed to ‘merely’ 15% is…

As though it required any more amplification, this would be the equivalent of approximately 9-16% of total tax revenues taken by the UK government each year!

What does this rich people insurgency mean?

The improvement of the material condition, starting with those most in need is not just a welcome notion but a moral imperative.

It is no wonder that Philip Alston, the UN rapporteur on extreme poverty and human rights, accused the UK government in 2019 of the “systematic immiseration of a significant part of the British population”.

The irony is not lost on me that two news cycles have been captured by the reporting on the group of 30 millionaires calling for immediate and significant change in favour of working people, the poorest, in particular, to be paid for by none other than them and their ilk!

Where are the party of the workers?

The supposed party of the working person, the Labour Party, haven’t managed anything more significant than agreeing with Boris Johnson on just about anything that matters!

This is how disgusting the UK financial elite and their incestual partners in government and opposition are that it has had to come from within their own house, their own Elysium to get any traction from a mainstream media so enamoured by the prospect of their own power and enrichment.

Are the ‘class traitors’ supporting us to be trusted?

The more cynical amongst us may think that while there is an element of philanthropy in these groups lobbying for a closing of the gap between those that have and the rest of us, there is more than a touch of self-interest, if not, self-preservation.

Whilst it may be hyperbolic to suggest that they are concerned about a literal reenactment of 1789 and everything that came along with the French Revolution, a metaphorical one just might feel as bad.

They also may have reason to feel it necessary to do something to, once again, metaphorically, save their necks. After all, I don’t recall this group at any point in the past 11 years lobbying government, I don’t remember them out on the streets protesting for our right to the simple dignity of life to not live like economic slaves or at least indentured servants.

What could be the outcome?

There has been a Tory administration responsible for the creation of the endemic poverty and misery of a generation.

Even Louis XVI wasn’t completely indifferent to what was happening to his people. Even he was willing to consider reforms. Too little too late? Evidently, it was.

What does that mean for the modern-day equivalent, the contemporary ‘financial monarchy and aristocracy’ of the UK and their total contempt for the people? Are they for ‘the chop’ too?

One thought on “The Rich are Eating the Rich”