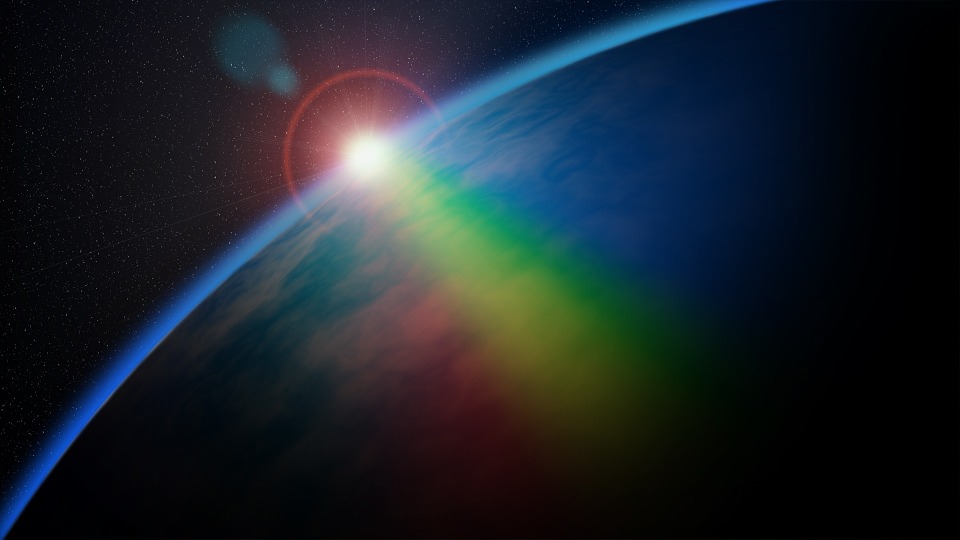 The more senior of the two people who sat and watched the static-ridden screens on the computer smiled to himself and nudged the other one.

‘There!’ he said, jabbing his finger at the hazy picture, ‘that planet right there!’  His companion leaned across the table and peered at this strange world.  It was blue and looked quite small.

‘That will not be big enough,’ he said, his disappointment turning his comment into a sigh.  He moved back to his position and continued to look at his own screen.

‘It may have to be,’ said the other.  ‘There are not that many planets that have the right atmosphere in this part of the galaxy, are there?  How long have we been looking?  Months.’  He stood up and stretched.  ‘I’ll inform them upstairs,’ he added and headed out of the room.

The lift took him up to the office. He knocked on the door and entered.

He stayed long enough to explain his findings then returned relieved, to his companion.

‘They want more readings but I really think this is it!  I have a good feeling about this one!’ He looked pleased with himself.  ‘There are still several billion miles to go until we get there though so we’ll have to go back into stasis for a while.’  He patted his belly then continued, ‘dinner first though, eh?’ the other one agreed and the two of them left the viewing room to go and eat.   While they were eating they received word from upstairs that their search had ended and that this little blue world was indeed the best and probably the only choice in this part of space.

Many months later, the crew and passengers, numbering almost one thousand on this enormous spaceship, awoke in the orbit of the new planet.  It was mostly blue but had several green and brown landmasses.  A ship wide announcement told them their mission was about to begin,

‘This planet has been scanned.  It has an almost perfect atmosphere and we will be able to live, grow crops and flourish.  As you will all know by now, the indigenous life is at the optimum stage for our mission and so we will be landing here.  This world has a blue sky like our own planet and seas, lakes and forests.  It is a pristine new world, the like of which you have only seen in books and on computer screens.  Tomorrow we will go out and into our new home and we will multiply our number.  For now, eat, prepare and gather your strength.’  The announcement ended and the people prepared for the task ahead.

The craft landed on the edge of one of the biggest continents and everyone was given their survival pack and final briefing as they left the ship that had been their haven for so very long.  The last few hundred healthy people from a planet ravaged by hunger and heat because they had mined and burned and polluted.

The new day dawned and the crew and passengers left the ship to start work.  Each of them carried a survival pack of dehydrated food, a tent and various instruments to assist their undertaking.  They travelled in small groups of four or five and spread out far over this verdant new land.  Some crossed huge rivers in boats, some climbed mountains and a few disappeared into forests. Their abandoned spacecraft would slowly disintegrate without harming the land and no trace of it would be found in the years to come.  They defended themselves against huge carnivorous beasts along the way but most survived.

When these groups encountered the creatures they sought, the slow and difficult process of communication began.  These strange native beings had no speech but communicated with gestures and facial expression; the muscles under their skin contorting their faces to convey their wants, their thoughts and often their aggression towards these strangers.  Their eyes betrayed fear at first but with patience and kindness and a certain amount of ingenuity, the passengers of the ship began to connect.  They taught these natives how to make fire, to sow seeds and gather the harvest.

In time, they made children with them and a new species was born.  The offspring were taller, brighter and more capable than their parents.  They taught those children to speak.  Soon enough, a whole language developed, much like the spoken word on the far away world, from where the crew and passengers had arrived.  The descendants of the native beings and the people from the spaceship spread out wide over the small blue planet and filled it.

Almost two million years after the arrival of the spacecraft, a race of people finally gave this planet a name.  They named it after the rich, brown soil beneath their feet.

They called this world Ertha.