The Legend of the Grey Wethers 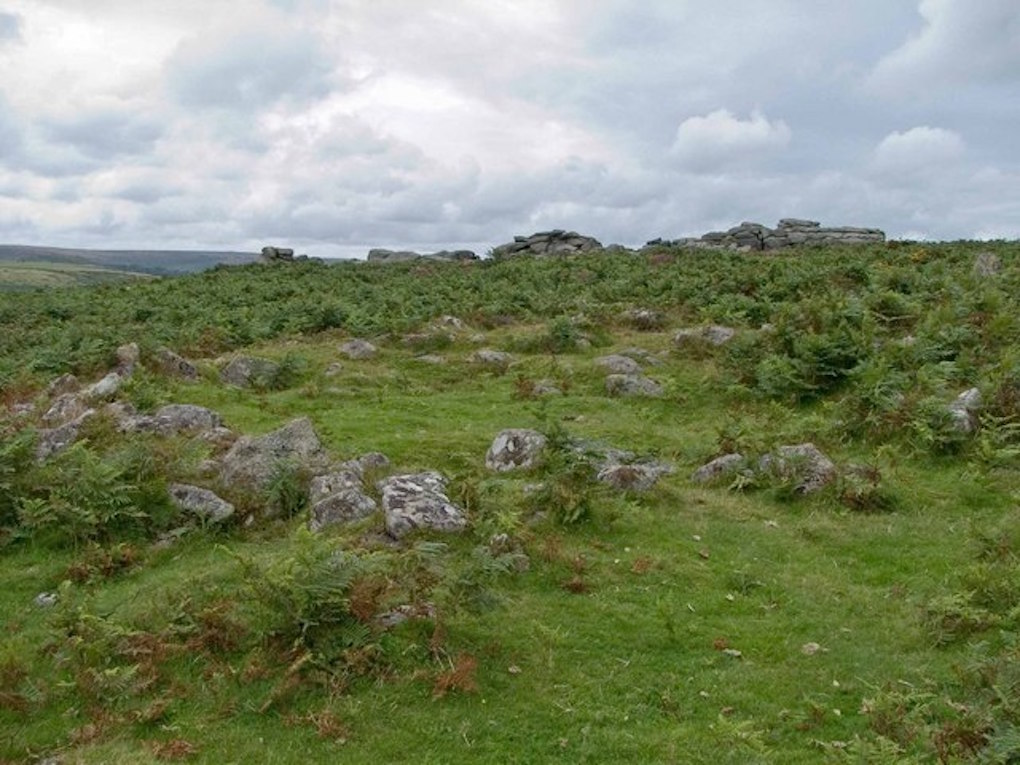 A Tale from Dartmoor

ONCE upon a time around about 1765, there was a young farmer named Thomas Davey who was looking to buy sheep from Chagford Market in Dartmoor.  He had recently inherited his Father’s farm in Oakhampton but due to the ill-health of both his parents and his older brother Harry, the effects on their flock of sheep had been disastrous.  Harry had little interest in animal husbandry and was feckless and lazy.  His parents had died during the previous winter and Harry, left to his own devices had withered away soon after.  The farm had come to Tom and he was going to do his best to make a success of it.  The very first thing was to buy sheep.  Good quality sheep and as many as he could afford.

He rode his horse to Chagford market and was disappointed to see that by the time he arrived, most of the sheep for sale that day had already been sold and the few that were left looked scrawny and miserable.  He would find somewhere to dine and sleep then return to the market bright and early the next morning.

He was not familiar with this area and rode further down the road until he saw a sign that told him he was not far from a village named Postbridge.  There must be an inn there so he continued on his way.  Sure enough Tom soon drew up to the New House Inn.  He tethered his horse and entered the thatched tavern.  There were about half a dozen men in there, all drinking and talking in the dingy light but as the heavy oak door shut behind him with a thud, each and every man there stopped talking and turned to see who had entered.  Tom stopped stock still and managed a small, restrained smile before he walked to a table and sat down.  He felt their gaze upon him still and he was grateful when the barmaid came over to him and enquired if he would like anything.  As she did so, the faces turned away and the background chatter continued.  Tom asked for ale and was told to have the local cyder and a bowl of stew.  He was cold and tired but the mutton stew and tankard of cyder warmed him.  When the barmaid returned he asked for a refilling of his tankard and could he please have a room for the night.  The barmaid informed him it may be possible but she would have to check with her Father, Mr Tapper the Landlord if there was a room for him.  “Ee shall return dreckly”, she told him and then disappeared through a door next to a huge cask of cyder by the far wall.  By the time Tom had finished his second cyder, she was back to tell him, “seeing as though is nearly dimpsy, ee Father says ye can sleep in the upstairs room.  For a good price and will ye be wantin’ breakfast, me’ansum an’ am ee to put ye’s horse in the stable wi’ a nosebag?”  So it was all settled.  Tom gave her several copper coins for the room and board then asked for more cyder.

He drank alone for the first couple of hours but the cyder loosened his legs and his tongue and Tom found himself wandering over to another table and sitting with the locals to pass the time in a manner more entertaining.

“Sheep?” said another, followed by much laughter.

“Ye’s a farmer, then?” said a third.  “Ye’s stop with us an’ we’s may be ‘elping ye out with that.  Certainly if ye could see ye way clear to paying for the next round!”

Tom sat with the men for the remainder of the night and told them all about his family, his brother’s hopelessness with the family farm and his own hopes for the future.  He got more and more drunk he paid for several pitchers of cyder for everyone at the table and poured out his heart to them along with the cyder from the jug.  Then after they’d finished off the last jug, the men at the table stood.  The first one Tom had spoken to, informed him that he had good news for him.

“Ee old Uncle has sheep for sale,” he said.  “They be in a field not far, we will take ye to ‘em an’ if ye like the look of ‘em, ye can buy ‘em!  Cummus ‘zon this way, bey.”  He put his arm around Tom’s shoulders and walked him out of the pub and up the ridge just behind the inn.  The others followed.  Tom was drunk enough to not object but not too drunk that he couldn’t manage to climb the ever steepening hill.  “Not far now, bey,” he said.  “Nearly there.”  Tom let himself be led up that hill and then along a stony path and then up another hill until finally the man with his arm around Tom, to hold him up said, “There!”  Tom looked.  There was little light but for the almost full moon and the stars in the cloudless sky.  In the distance, beyond the pointing finger of the man holding him up, Tom saw a field.  He strained to focus.  He could see something in the field.  Lots of somethings in the field.  Round-ish shapes, there on the ground.  His eyes grew more accustomed to the dark far-away view and he saw two flocks of sheep.  There must be more than fifty.  They looked large and thick fleeced as they stood in the field chewing the cud.

“Ye be robbing ee old Uncle at that price!  ‘E has his dummon and angletwitch to feed!”  The man spun his head to look outraged, at Tom.

“Ten, then?” pleaded Tom, who now very much needed to buy these lovely sheep.

“Ee shall be savage wi’ ee!  But…” the man pointedly pondered, while scratching his windswept head.  “Ten pounds it be then, bey.”  The man beamed and squeezed Tom’s shoulder.

Tom was overjoyed.  Sixty beautiful sheep for ten pounds!  It was much more than he had hoped to pay but they were extremely large and healthy sheep so it was worth the hefty price.

“Cummus ‘zon, ee shall get ye back to the Inn,” said the man who held up Tom.  Then laughing and singing they all headed back to the New House Inn.

The next morning Tom awoke in a strange bed.  He cranked open his eyes and a throbbing, banging in his head told him he had been drunk the night before.  He tried to sit up, slowly and awkwardly so as he didn’t shatter into pieces.  He put both hands to his aching head and tried to remember the previous evening.  He recalled walking far into the dark night with someone.  Several someones.  Why?  Where had he been?  What was he doing here in this strange room?  The memories slowly filtered through his addled brain and he remembered something about a flock of the most beautiful sheep.  And he had bought them.  He reached for his money and found only a few copper coins where there had been many silver coins there earlier, he had brought all his money with him to Dartmoor.  He must have paid for the sheep, then.  He could not remember.  A knocking on the door to his room made him start.  He stared at the door.  Then again, knocking.  He called out for whomsoever was knocking, to please come in.  The door creaked open and there stood the barmaid from last evening, in her hand was a bowl of bread and rabbit stew and with a tankard stood in the centre.

Tom, still clutching his tender head, looked closely at her through squinting eyes and said, “uh, ee thinks ee did!  Who from?”  The barmaid put down the bowl on a small table in the corner of the room.

“That’d be from Mr ‘Enry Gurny,” said the barmaid.  “’E will be ‘ere presently to give ye directions to them sheep, lest ye forgot.  Seein’ as ye were a little drunk!  ‘Ope ‘e did not sell ye a pig in a poke!”

“No, ee only bought the sheep,” said Tom.  But he brightened at her words.  The barmaid left the room frowning and shaking her head slightly, reminding Tom to eat his “Luverly breakfast.”  He groaned as he swung his feet off the bed and then tried to stand.  The room span a little but he managed to stagger to the corner where he sat and ate his bread and stew then washed it down with the ‘small beer’ which he always enjoyed – it was thick as broth and he soon felt his thumping head improve a little.

Soon after, feeling slightly better, Tom pulled on his boots and tunic and after much searching, found his coif; he tied the straps under his chin and left the room.

Downstairs in the New House Inn, there sitting at one of the tables was Henry Gurny.  He saw Tom straight away and called him over to the table.

“Ee’s been waiting for ye,” said Henry Gurny, merrily.  Tom sat down and Mr Gurny continued.  “Ee gunna show ye where the sheep be, ‘cause ee be an fore-right man an’ ye waz guddling last evening like a dawcock an’ ee think ye cannot remember the way to them sheep!”  Mr Gurny insisted on Tom buying him another two tankards of cyder while he explained where the sheep were.  Some hours later, Tom was again a little drunk and Henry Gurny had fallen asleep, Tom decided to leave.  He would take his horse from the stable and ride to collect his sheep.  He thanked the barmaid for her trouble and rode down the road a way before the steep hill became a gentle incline and then rode his horse up and over the hill.  Henry Gurny had called this ‘Water Hill’ then Tom rode onwards to ‘White Ridge’, from where he had viewed the sheep the night before.  It was just a short ride from there, down the other side to the damp peatland and beyond to the south eastern slope and the sheep that were happily grazing.  This place, Mr Gurny had said, was called ‘Sittaford Tor’.

Tom, cheery from the cyder and from the sunny afternoon felt pleased with himself.  He eventually got to White Ridge and looked across to see his newly acquired sheep.  “Yer Tiz!” he said and patted his horse heartily.  The sheep were still there.  Still in the same position they had been in the night before.  He stared harder.  Wait.  That was not right.  They must have moved around since last night.  But no they had not.  They were completely still.  Tom strained to see.  These were odd sheep, it had to be said.  He shook his head and rode on towards them.  As he got closer he began to worry.  Closer still and worry turned to panic.  These sheep were much too still.  They did not move at all.  Not a turn of a head nor a drop of the head to munch on the grass.  Nothing.  Tom got to within spitting distance of the sheep, jumped down from his horse and then the truth hit him over the head.  He felt dizzy.  His vision blurred.  He dropped to his knees onto the sodden grass and sobbed.  Before him were two ancient stone circles.  Each grey stone looked vaguely like a sheep.  He had bought, with all his savings and scant inheritance, sixty immoveable and useless rocks.

*The New House Inn burnt down years later and was rebuilt on the other side of the road in 1845 and renamed “The Warren House Inn.”

Whether or Wether – sheep

Drekley – soon, but an unspecified time

Yer Tiz – here it is