The Labour Party. Nothing Ever Lasts Forever. 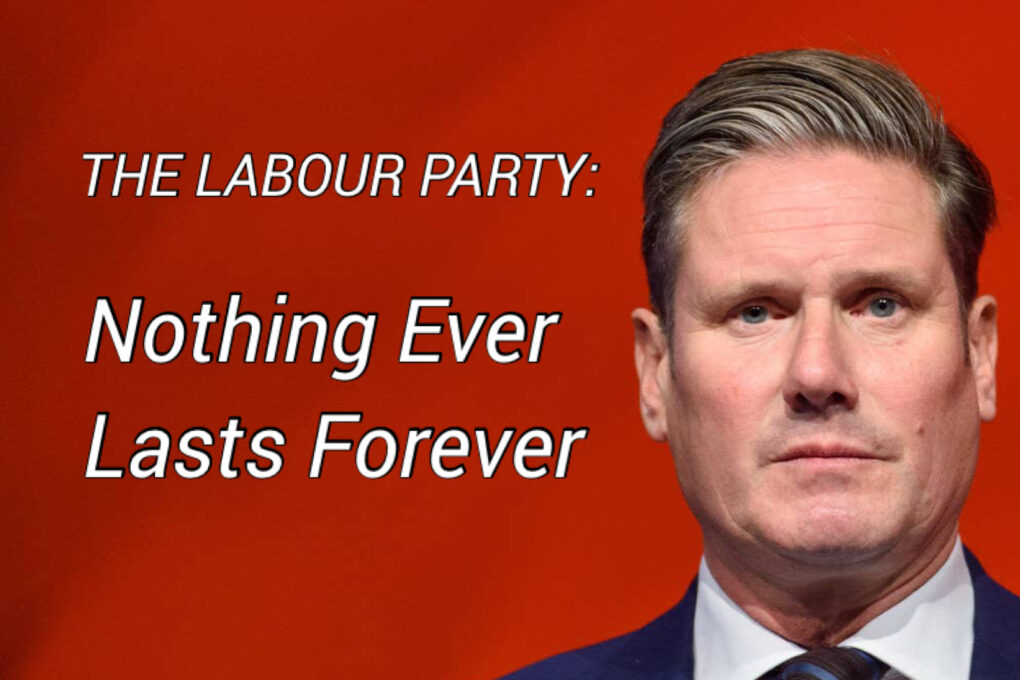 It’s almost as if they have timed the death of the Labour Party with the imminent death of our proudest creation, the National Health Service. Of course, both will still exist, but just not in a way that you recognise them. You could argue that both have ceased to exist for some time now, at least in the sense of how you remembered them. When did that happen?

You see, a one-hit-wonder once said,

“You can walk my path, you can wear my shoes, learn to talk like me and be an angel too.

Even the guy that penned those deep and meaningful lyrics, Peter somebody or other? He was soon traded in for Noel Gallagher – his brother describes him as a “corporate gobshite Tory boy” – and champagne (supernova) soirées at Number 10 Downing Street became the new thing. “Cool Britannia” wasn’t it? Fooled Britannia, more like.

Of course, Britain was already on a downward spiral before the New Labour government of Blair arrived. Our social fabric had been torn apart, widespread deindustrialisation leading to mass unemployment, vast swathes of our public assets were sold off for a pittance, communities were politically vandalised by Thatcher, and neoliberalism was here. It was the end of “we” and the beginning of “me”.

Tony Blair had a chance to put it right. Not many people realised the first 2 years of the New Labour government were economically dictated by the Conservatives own spending plans, which the Blair government agreed to stick to. A big round of applause to anyone at the time that realised how this was simply a precursor to what the future might look like.

“A new dawn has broken, has it not?” – Blair could hardly believe it himself. It was a Labour landslide of truly historic proportions, handing Blair a Commons majority of 179. Many Blairites drone on about 1997, and, to an extent, they make a small point, but the point they usually forget to make is quite a significant one. The historic landslide was made to look considerably more dramatic by the collapse in the Tory vote. In fact, dreary John Major’s Conservatives had won more votes in 1992 – 14,093,007 – than Blair’s 1997 total of 13,518,167.

Don’t get me wrong, 13.5 million votes is pretty damn impressive, but it was made considerably easier by a non-hostile press. Indeed, it was the then-powerful S*n declaring “We back Blair”. Tony and Rupert went on to develop a wonderful friendship, as you probably know. Someone that didn’t have such a cosy relationship with Mr Murdoch was a chap named Jeremy Corbyn.

Had he won in 2017 he would’ve been the first Prime Minister in my lifetime that didn’t owe a single thing to Murdoch, Rothermere, the Barclays, Richard Desmond, or the many vested interests that have such an unhealthy control over the direction of which a government will travel. Thinking back, those 12.8 million votes picked up by Mr Corbyn in 2017, against a tsunami of smears, lies, and unbridled hatred from the establishment and their protectors in the media, were quite an achievement.

We came so close to healing the wound created over the 4 previous decades, but, in the end, it was merely a sticking plaster – and many of the ‘players’ in today’s embarrassing failure of an opposition did their bit in throwing 2 general elections, and by “throwing” I most certainly mean intentionally losing. I was there, as were many of you.

I was saying earlier about the NHS and its tragic demise coinciding with the last gasps of the Labour Party, and it doesn’t take you long to remember it was New Labour that marked the start of the transition of the NHS from a public sector provider to include the private sector, under the disguise of choice and competition. Labour’s 1997 manifesto stated:

“Our fundamental purpose is simple but hugely important: to restore the NHS as a public service working cooperatively for patients, not a commercial business driven by competition.”

The NHS was undoubtedly the greatest achievement of any Labour Party; it was, and still is our jewel in the crown. But it was New Labour’s soft-Thatcherite free market economics that carved open the NHS, which is why you see a billionaires with their own space rockets suing the NHS because their apparently ‘non-profitable’ private healthcare firm didn’t win a contract.

This Labour Party of today has destroyed more than a century of its own history in less than 18 months. Well done, Sir Keir.  It is an anti-democratic, anti-socialist organisation, with absolutely no respect for their fee-paying members, the trade unions that fund them to the tune of millions of pounds every single year, and they have completely disregarded the values of the Labour movement, all because they believe a party that stands for nobody will somehow win the support of everybody. This Labour Party of today still believes the path to Downing Street is painted in the red, white and blue of the Union flag. Starmer forgets; it wasn’t that long ago he preferred the flag of the European Union, but that didn’t quite work out, so he ditched ‘Ode to Joy’ and the People’s Vote campaign and he tried grabbing a slice of the ‘Get Brexit Done’ pie while it was still hot, but it was too late by then.

The electorate of Britain has certainly made some bizarre choices down the years, but the choice they make usually involves a leader with a certain charisma. It might not be a type of charisma you particularly enjoy, such as Johnson’s Poundshop Churchill buffoon act, or Saint Tony Blair’s stomach-churning “Diana was the people’s Princess” thing, but it was a charisma that inspired enough people to go out and vote for them. People will buy into the person before they buy into the vision.

But try buying into Keir Starmer. While this might not be difficult in the literal sense – providing you’re wealthy enough and you hate lefties – buying into the person that is Keir Starmer is an impossible transaction to make. Starmer’s charisma doesn’t exist. He has the magnetism of a condom, the likability of a 3 am toe-stubbing, he cannot hold an audience, because he sounds permanently cold-ridden and thoroughly disingenuous, and he surrounds himself with a magnificent array of ineptitude, possibly in the hope of not looking quite so lamentably pathetic in absolutely everything that he does.

This is coming from someone who would naturally vote Labour. But I will not vote for a Labour Party that isn’t a real Labour Party. This isn’t about purity, it’s about principles, something which Starmer abandoned some time ago on his ill-fated quest for power. Starmer, Evans, and all of their friends in the media will try and convince you that they have got their Party back. They haven’t. It was never their Party in the first place.

Their ideal Labour Party died more than 10 years ago. Watching Starmer trying to resuscitate the corpse of New Labour isn’t a pretty sight, and, in just 18 short months, we can now safely say what was started by one Keir has gone on to be ended by another.

Rest in peace, The Labour Party.

One thought on “The Labour Party. Nothing Ever Lasts Forever.”