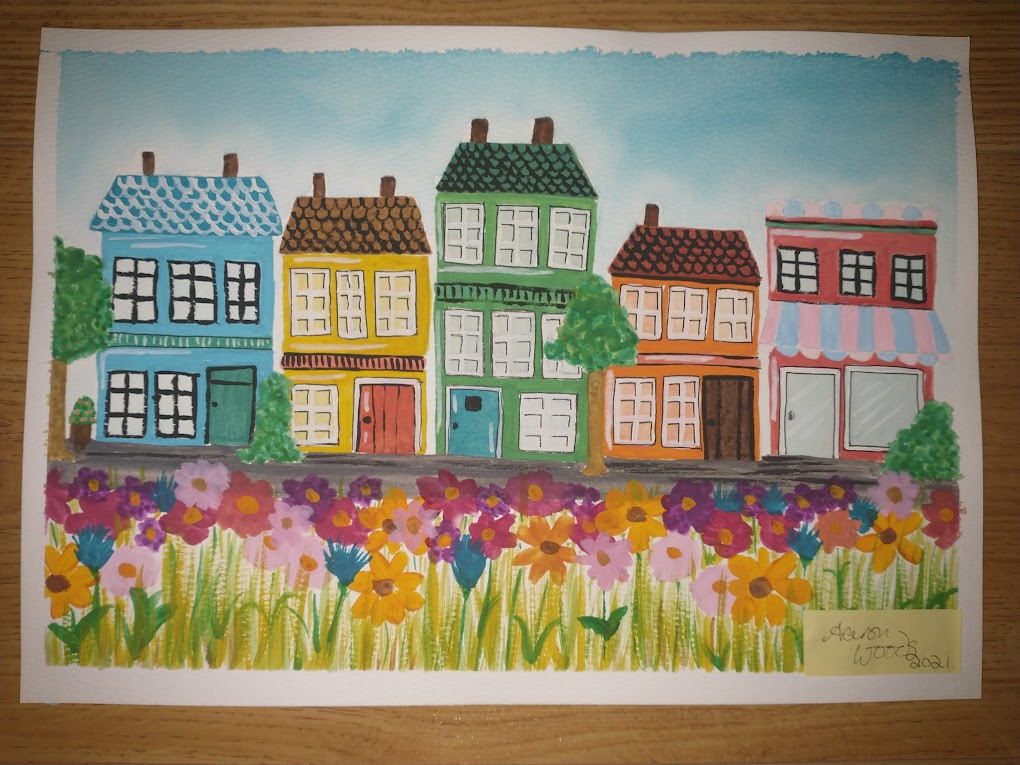 Madelaine Somerville part-owned an antique shop on the High Street in Bridgerton. Her business partner was Phillip Gordon. He had lost a little interest in the day-to-day running of the shop that they had named ‘The Curio-City Shop’. Over the last ten years, he had only popped in a few times a week, and not for long, and made the odd suggestion to visit a particular auction to bid for a certain lot. Yesterday had been one of those days.

Phillip had emailed Madelaine to tell her that the auction house in nearby Ringhampton had something “rather special” coming up for sale the following week and she “really MUST attend” to buy one specific item. It was Lot No. 73B, quite a large painting by renowned local artist, Aaron Woods. Phillip explained that the painting was not especially remarkable to the untrained eye but that Madelaine “absolutely” had to win this lot, and that it was “imperative” that she “bring it back home”. He said, “Price is no object”, which he had never said before.

Madelaine was intrigued. She spent the rest of the afternoon pondering Phillip’s odd but urgent request, in-between the three customers who had wandered into the shop. Madelaine could not help but feel puzzled at his demand.

The next week came around quickly, and then it was the day of the auction.  Things were already well under way by the time Madelaine got to the auction. She went into the hall and took a seat near the back. All she could think of was why Phillip wanted this painting.  Why did he want it? Was the artist a relative of his? Was this a gift for Phillip’s husband Michael? No, she knew Michael had better taste than this, she was sure he wouldn’t like it at all

“Lot 73B,” announced the loud voice of the auctioneer, “a charming study of suburban living by acclaimed local artist, Mr Aaron Woods. It is a gauche on canvas painting, measuring thirty-six by forty-eight inches. It is titled ‘Jelly-Bean Street’ and is signed by the artist. The frame is…,” he trailed off.  “This lot is an unframed painting so the buyer can of course choose their own style to compliment the picture.” A hushed titter wafted through the small crowd and the auctioneer looked out at the people, smiled and said,

Hands and the price rose, and then a new hand joined in. Madelaine looked at the three bidders.  One was a woman with blonde coiffed hair; the other two were men in dark suit jackets. The bids rose surprisingly quickly to £1,800, and then Madelaine joined in. By the time the price on the painting was £4,300, the blonde woman was out.   The price continued to rise, and they reached £5,400. Madeleine was surprised at the price but was more resolute than the two men, as she finally won the battle at £5,800. Her final competitor furiously tore down his hand and shook his head in barely concealed anger.  She had won the lot.

She sent a text to Phillip and he called her straight away.

“Madelaine?  You have the painting?” Phillip gabbled, “Jelly-Bean Street? You really do have it? And it’s very well packed and protected for the journey back to the shop?” Madelaine could hear the anxiety that gripped his throat.

As she drove, Madeleine continued to ponder why Phillip wanted this picture. The depth of his anxiety about acquiring ‘Jelly-Bean Street’ was directly proportional to the height of her curiosity.

Soon enough she was parking on the road in front of the shop. Phillip, as promised, was there by the door waving to her. He came rushing to the driver’s side before she had turned off the engine.

“Madelaine! You’re back! And the painting is all right? It is safe and sound?” He peered through the back window of the car to see the package. “Ah yes, I see it’s A-OK. Thank Goodness!” he said.

So, under Phillip’s direction, the two of them carried the painting into the shop as if it were a holy relic.  Eventually they stood the picture reverently up against the far wall. Phillip, satisfied his painting was safe, told Madelaine she could go home if she wanted. Then he thanked her very much for buying this “marvellous painting”, how it meant the world to him and Michael, how very much he admired her bidding skills and that only going over price by £800 was fantastic.

“What is it about this ‘Jelly-Bean Street’ painting, Phillip?” she asked when he let go of her. “What are you seeing that I am not?”

The next morning, Madelaine arrived at the shop, opened up and began her day.  The painting was still leaning up against the wall but now entirely unwrapped. Madelaine gazed at it.  Her gaze wandered over the row of houses and the pink café, the border of splodgy flowers and the overly-cheery blue sky. It was so juvenile!  Shaking her head with dismay, Madelaine turned around to leave the room. It was then that she saw a white envelope sticky-taped to the back of the stock room door. Her name was written on it with fountain pen, in Phillip’s beautiful handwriting.

By lunchtime, Madelaine decided that hers was not to reason why, so she closed the shop, loaded the re-packaged painting into her car and drove the short distance to Jerry’s framing shop to drop off the picture.

There was neither sight nor sign of Phillip for the rest of the week. Madelaine tried several times to call him, but his phone always went straight to answer service.  By Monday she could not resist driving to Phillip and Michael’s house.  Neither Phillip’s nor Michael’s car was parked on the driveway but, more disturbingly, there was a “SOLD” sign that stood triumphantly in the front garden.

The next day she received a call from Jerry McCormack saying the painting was framed and ready to be picked up. Phillip had been normal until this picture came on the scene. “This painting has sent him mad!” she said aloud, staring at it accusingly.

“Try to imagine what might be behind the houses, Madelaine” said a voice. It was Phillip’s voice.  Madelaine started and looked behind her, but there was no one there.

“Look at the green house and into the right-hand window on the middle floor,” said Phillip’s voice.  “Do you see the hands waving at you?” Madelaine bent over to see more clearly and then clapped both her hands over her mouth.

“Yes, I believe I do!” said Madelaine in a very quiet voice.

“Just a couple of months ago,” said Phillip, “Michael was given some bad news. He was terminally ill. The doctors said he had a few months. As you can imagine, we were devastated. I heard about Aaron Woods, who painted this picture. He is a painter Michael and I met last year. I got in touch to ask if there was anything he could do to help us. He told us that this painting had certain special qualities and, if I could manage to buy it at the auction, that he would bless us with a powerful spell. He is a Wiccan and is extremely well respected for his powerful spells and incantations…”

“ I’m so sorry to hear about Michael. That’s awful.”

“No, no, you don’t understand. Michael will be just fine, Madelaine!  Aaron has put us into this painting!  We are part of the design!” said Phillip joyfully. “We can live out our lives here in Jelly-Bean Street, Madelaine. Here we can live free from time and disease. Michael is well again and we can happily live in the bounds of the picture for as long as this painting survives.”

“So this is goodbye, then,” said Madelaine.

“We had to do this: it’s the only way. Thank you, Madelaine, I shall miss you but, this is goodbye dear friend, farewell.”

And then he was gone.

The next morning Madelaine took ‘Jelly-Bean Street’ to the Nat Eastminster Bank in town. Mr Winterbottom was indeed expecting her and welcomed her into his office. He solemnly took the painting from her and promised her he would personally take care of it. Madelaine thanked him and, left.

Darryl Winterbottom positioned himself in front of the painting and began chanting the verses of the spell that he had learned from Aaron Woods. Aaron had not wanted to tell Winterbottom the incantation but had little choice on hearing that it would be very simple to inform the police about his fifteen years of tax evasion.

Someone might have to be obliterated but that was a sacrifice Darryl Winterbottom was willing to make. And so there in the old bank vault, he finished the spell. Then, bottle of acetone in hand, grinning wildly and calling Michael’s name, he disappeared into the ‘Jelly-Bean Street’ painting.