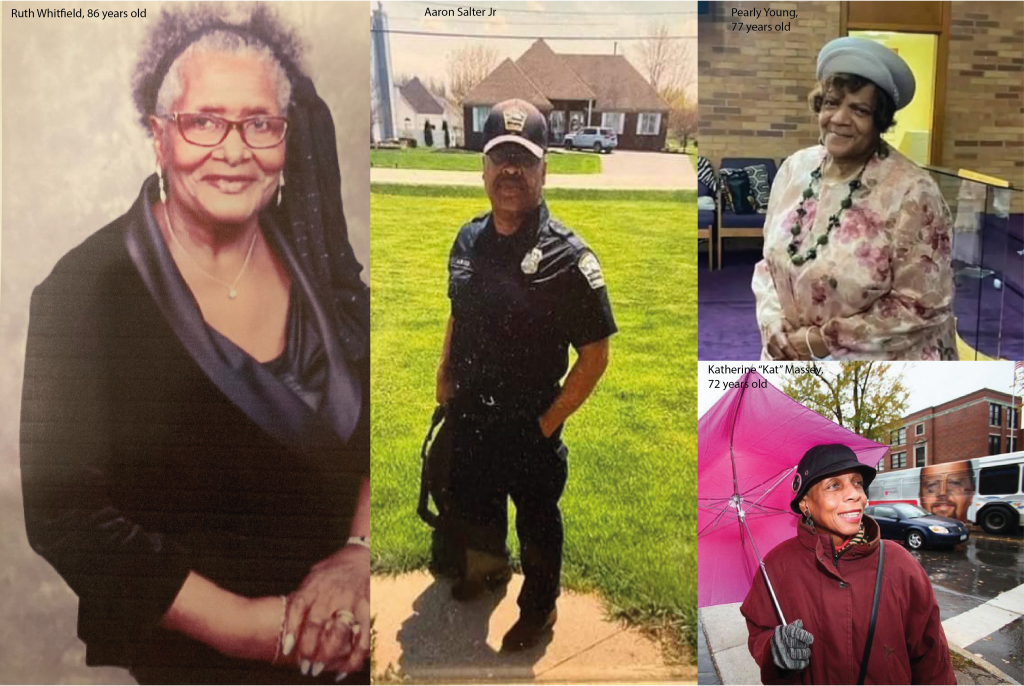 4 of the victims of the racially motivated shooting. Images from Twitter

ON Saturday a gunman in Buffalo, New York killed ten people and injured three more in what has been described as a racially motivated killing. 18-year-old Payton Gendron, drove from his home about 200 miles away to the Tops Friendly Market, which is located in the heart of Buffalo’s Black community, with the intention of killing. Eleven of those killed and injured were Black, the remaining two White.

It is being investigated as a racially motivated attack, with Erie County Sheriff John C. Garcia, saying during a press conference on Saturday: “This was pure evil. It was straight-up racially motivated hate crime from somebody outside of our community, outside of the City of Good neighbours … coming into our community and trying to inflict that evil upon us”. The FBI is investigating the shooting as a hate crime and an act of racially-motivated violent extremism.

On Saturday Gendron arrived at the store around 2:30 pm, heavily armed and wearing tactical gear and a helmet. Attached to his clothing was a camera which was livestreaming his actions. He used an assault weapon, according to Erie County District Attorney John J. Flynn. Gendron shot four people outside the grocery store, three fatally. He then entered the store, where he exchanged fire with an armed security guard, who authorities said was a retired Buffalo police officer. The security guard died of his injuries. He then shot eight more people in the store, six of whom he killed.

Where were the safeguards?

Authorities say the semi-automatic rifle he used had been purchased legally, but modified illegally. A law enforcement official told The Associated Press on condition of anonymity that Gendron had threatened to carry out a shooting last year at Susquehanna Valley High School around the time of graduation. Apparently New York State Police said troopers were called to the Conklin school on June 8, 2021, when he was 17 years old. He was then sent for mental health treatment. Which begs the question as to why he was not on any watchlist. The clerk who sold him the weapon has said there were no flags when he entered Gendron’s name into the computer.

Buffalo native and New York Governor Kathy Hochul said an investigation into the shooting would focus on how Gendron managed to get away with it when he was known to authorities and presented a threat, which is a question many will be asking. “I want to know what people knew and when they knew it,” she said, adding “these depraved ideas are fermenting on social media – it’s spreading like a virus now”.

The authorities have in hand a manifesto which as yet has not been officially attributed to Gendron, but is thought to have been written by him. The 180-page document outlines ‘The Great Replacement Theory’ – a racist conspiracy theory that white people are being replaced by minorities in the US and other countries. The manifesto holds racist, anti-immigrant and anti-Semitic beliefs, among which was a desire to drive all people not of European descent from the US.

The manifesto’s author says he bought ammo some time ago but didn’t get serious about planning the attack until earlier this year. He continues on about his perceptions of the dwindling size of the White population and claims of ethnic and cultural replacement of Whites. The manifesto’s author attributes the internet for most of his beliefs and describes himself as a fascist, a White supremacist and an anti-Semite.

A preliminary investigation has found Gendron had often visited sites espousing white supremacist ideologies and race-based conspiracy theories and had extensively researched the 2019 mosque shootings in Christchurch, New Zealand, and also Anders Breivik, the Norwegian far-right terrorist  who killed 77 people in one day in 2011.

But it is also how the shooting was brought to an end that many will question in the days to come. When confronted by police, the shooter held a gun to his own neck, but police talked him into dropping the weapon and surrendering. I think we all know that, had the shooter been an 18-year-old Black man, he would now be dead at the hands of the police. Racism does not exist solely in the heads of far-right extremists.

The victims, may they rest in peace:

Zaire Goodman, 20, of Buffalo, was treated and released from hospital

Jennifer Warrington, 50, of Tonawanda, New York, was treated and released from hospital