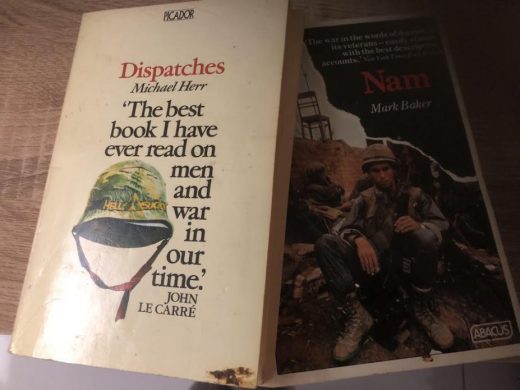 Someone asked recently why we have a different view on war today compared to how we saw, for example, the Vietnam War, and my answer was “the media”. I don’t know how many of you remember the Vietnam War, but surely most of you have read something about it, and the stories you will have read – and the films you will have seen, notably, at least for me, Deerhunter and Apocalypse Now – will have painted a vivid picture of the horror of war and the toll it takes, not just on civilians caught up in it, but on the soldiers sent to fight that war.

We don’t see that picture painted for us nowadays, and perhaps the main reason is that journalists are not embedded with the troops as they used to be. (And if they do get to cover a war (or conflict as they are far too often called, these journalists usually have to toe their publisher’s line.) I want to draw your attention to the work of two writers from the Vietnam War era – one a journalist, Michael Herr, and the other, Mark Baker, the author of a book called Nam, for which Baker interviewed many Vietnam veterans and retold their stories as they had been relayed to him, telling the horrific as if it is commonplace. How these soldiers tell their stories and then have them retold is particularly harrowing.

Michael Herr was a correspondent who spent two years in Vietnam at the time, and his book Dispatches is the best I have read on the war. Nam is very good also, just told from a different perspective, and from the two books we have a clear idea of what the soldiers endured. So many of these soldiers returned disillusioned from Vietnam, both because of what they had seen and done over there and because of how their fellow citizens now viewed them. They did not come home to heroes’ welcomes, instead they were met with protests, jeers, cries of ‘baby killer’, to prospective employers turning them down solely because they were Vietnam vets. We cannot truly understand what it must have been like for them but, thanks to these books, we have an insight.

And can it be of any surprise to us that, after what they saw and did, so many of these men could not adapt to the society they were thrown back into? Instead, so many committed suicide. It is estimated that about three times as many Vietnam vets committed suicide than were actually killed in the war. Studies put the figure at between 150,000 to 200,000, but it is unlikely the true figure will ever be known. When one reads about what they endured during more than ten years* of fighting a war, which no doubt made little sense to most, it is not difficult to understand that figure and perhaps even to wonder, out of the almost three million soldiers who fought in that war, (this does not include military personnel who were not there as combat troops) how that number can not be higher.

There are a couple of paragraphs in Nam which I remembered, and I have gone back to them, because it always struck me that, if these were examples of acts these men could inflict on each other, god only knows what horrors they meted out to their enemy. Thanks to these works, however, and the reports of the My Lai massacre, we do now know some of the truth. Here, an incident is described where a soldier is talking to Mark Baker about a fellow soldier who had been caught with joints tucked away in the cast on his broken arm. He had been smoking with the soldier who is telling the story and some others when some officers approached, so he shoved the joints under the cast. However, during interrogation they fell out, and he gave up the names of those he’d been smoking with and the locations of a couple of dealers.

Everybody was understandably pissed off with him because of this and so he was kept under guard for his own protection, and during this time he was bitten by a rabid rat. He was being treated for the rat bite, and soldiers were not supposed to drink when undergoing treatment. However, this soldier, Ortega, did drink and had to be tied to his bed. What they did to him next brought home the brutality to me:

“I heard that he was tied to a bed and couldn’t believe my good fortune. We got some gasoline and went running over there. Somebody hit the first sergeant over the head – he was taken away with a concussion. I didn’t pour the gasoline over Ortega. He was twisting on the bed, ranting and raving. The other guys soaked him down with it. I threw a match. They took him out with burns on 85 per cent of his body. I don’t know if he was dead or not. At that point, I didn’t really care.“

There are many tales of the way they spoke to, treated, and often killed the locals, as well as enemy soldiers; tales of the unit who had partly shaved heads and collected ears from those they killed, of taking Vietcong up in helicopters and throwing them out, of killing women and children simply because they looked at them ‘funny’, of ‘getting a taste for killing’. It is truly distressing and heartrending. But they also portray how, before they had gone to Vietnam, they had thought they had morals, that there was a line they wouldn’t cross, though they were to discover, to the distress of some, that this wasn’t the case at all, they were not the people they thought they were. This was a tragedy for them as well as for those who crossed their paths.

In Dispatches Michael Herr’s voice is even more compelling than the voices in Nam who are recalling events, because he is there with the men, it is written very much in the ‘now’. His book has come to be seen as the definitive account of that terrible war, and Herr has been likened to Hemingway by fellow writers.

Herr’s first day in Vietnam, as he was on an airstrip, is described thus: ‘It was like a walk through a colony of stroke victims, a thousand men on a cold, rainy airfield after too much of something I’d never really know. Dirt and blood and torn fatigues, eyes that poured out a steady charge of wasted horror.’

Then, as he spent more time with different platoons: ‘People retreated into positions of hard irony, cynicism, despair, some saw the action and declared for it, only heavy killing could make them feel so alive. And some just went insane, followed the black light arrow around the bend and took possession of the madness that had been waiting in trust for them for eighteen or twenty-five or fifty years.’

The book also reflects on the way the men felt about ‘back home’, with most having nothing but contempt for their government. When they heard the news of Martin Luther King’s assassination, some of the Black soldiers found they were questioning, more than they had been already, their participation in this war. Why were they killing people for white people back home who didn’t want them to have equal rights? Some had already had doubts about their involvement, but with King’s death, they found they couldn’t even speak to their white fellow soldiers and were having second thoughts about their decision to remain in the army after the war, as quite a few had wanted to. They realised that, if they were stationed in the USA, they might very well be expected to train guns on their own brothers, and this was a line not all were prepared to cross. And who can blame them?

When you begin reading either of these two books, especially if you have not read similar books before, you are horrified, not just at what these soldiers, often boys, had to endure, but also at the dreadful things they did. As you continue reading you almost, almost, become accustomed to them. If this is how it affects us, as readers, how can we have ever expected better from the soldiers? And how can we ever expect any better in the future? War is hell.

A soldier watching another who everybody treats like shit:

‘“What’s the matter with him?“

“What does that mean?”

“It’s against the guy’s religion to kill.” That struck me as odd because I thought it was that way for everybody.’

*I am using ten years plus because I am speaking of US troop involvement, whereas the USA’s involvement was of course from 1954-75

NOTE: We must take note of Michael Herr saying, more than a decade after the book was published, that some of it was invented. But he also said this, “I don’t really want to go into that no-man’s-land about what really happened and what didn’t happen and where you draw the line. Everything in Dispatches happened for me, even if it didn’t necessarily happen to me.”