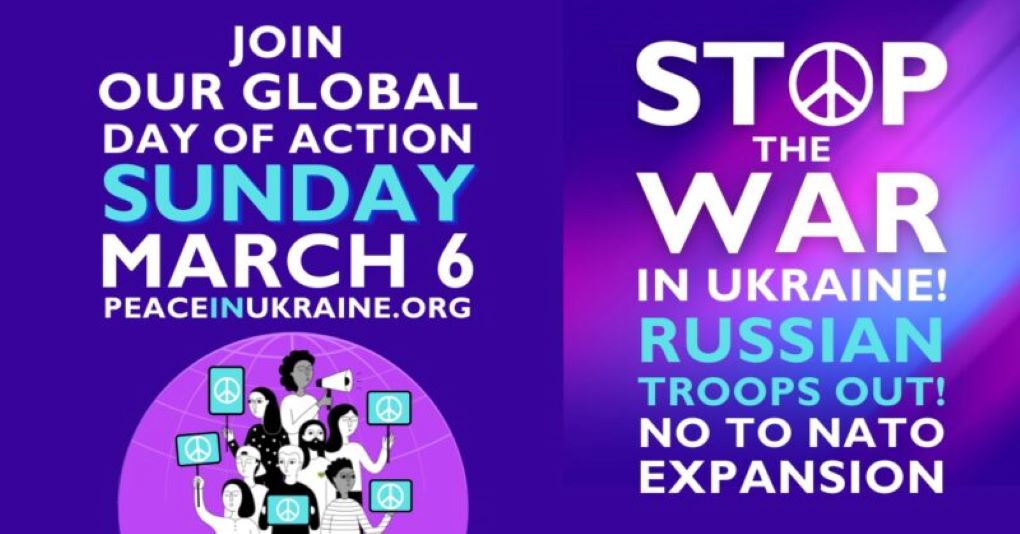 Stop The War is supporting a day of global protests for peace and for an end to the Russian invasion of Ukraine this Sunday.

On Wednesday a packed meeting at Conway Hall in London heard an impressive array of speakers. But the most impressive and inspiring contribution came with the reading from a declaration against the war by a newly formed coalition of Russian socialists.

We may be called Putin’s Puppets for challenging the pro-NATO narrative and questioning the role of Western governments in bringing us to this point. But to challenge Putin from inside Russia takes international solidarity to a whole new level. Here is the statement in full.

Manifesto of the Socialists Against the War Coalition

The Russian government betrayed its promises of peace and stability, leading the country into war and economic catastrophe.

Like any war in history, this one divides us all into poles: for and against. Kremlin propaganda tries to convince us that the nation is united behind the government — and that it is the pathetic renegades, the pro-Western liberals and the enemy mercenaries who demand peace. This is an untenable lie. This time, the elders of the Kremlin are in the minority. Most Russians do not want a fratricidal war, even among those who still trust the Russian government. They close their eyes as best they can, so as not to see how the world drawn by Russia’s propagandists disintegrates before them. Many still hope that this is not a war, much less an aggressive one, but a “special operation” designed to “liberate” the Ukrainian people. Terrible footage of brutal bombing and shelling of cities will soon destroy these myths. And even Putin’s most loyal voters will say: we did not give you consent to this unjust war!

Already today, tens of millions of people all over the country have expressed their horror and disgust at the actions of the Putin administration. These are people of various persuasions. Most, as the propagandists claim, are not liberals. Among them are a great many people of leftist, socialist or communist views. And of course, these people — the majority of our people — are true patriots.

We are told that the opponents of this war are hypocrites — that they stand not against the war, but for the West. This is a lie. We have never been supporters of the United States and its imperialist policies. When Ukrainian troops shelled Donetsk and Luhansk, we were not silent. Nor will we be silent now, when Kharkov, Kiev and Odessa are being bombed on the orders of Putin and his camarilla.

There are so many reasons to fight against the war. For us advocates of social justice, equality and freedom, several are especially important:

Putin is seeking to connect his own fate with the fate of the country. If he succeeds, then his inevitable defeat will be the defeat of the entire nation. Then, we may indeed face the fate of post-war Germany: occupation, territorial division, the cult of collective guilt.

There is only one way to prevent these catastrophes. We ourselves, the men and women of Russia, have to stop this war. This country belongs to us, not a handful of distraught old men with palaces and yachts. It is time to take it back. Our enemies are not in Kiev and Odessa, but in Moscow. It is time to kick them out. War is not Russia. War is Putin and his regime. That is why we, Russian socialists and communists are against this criminal war. We want to stop it in order to save Russia.