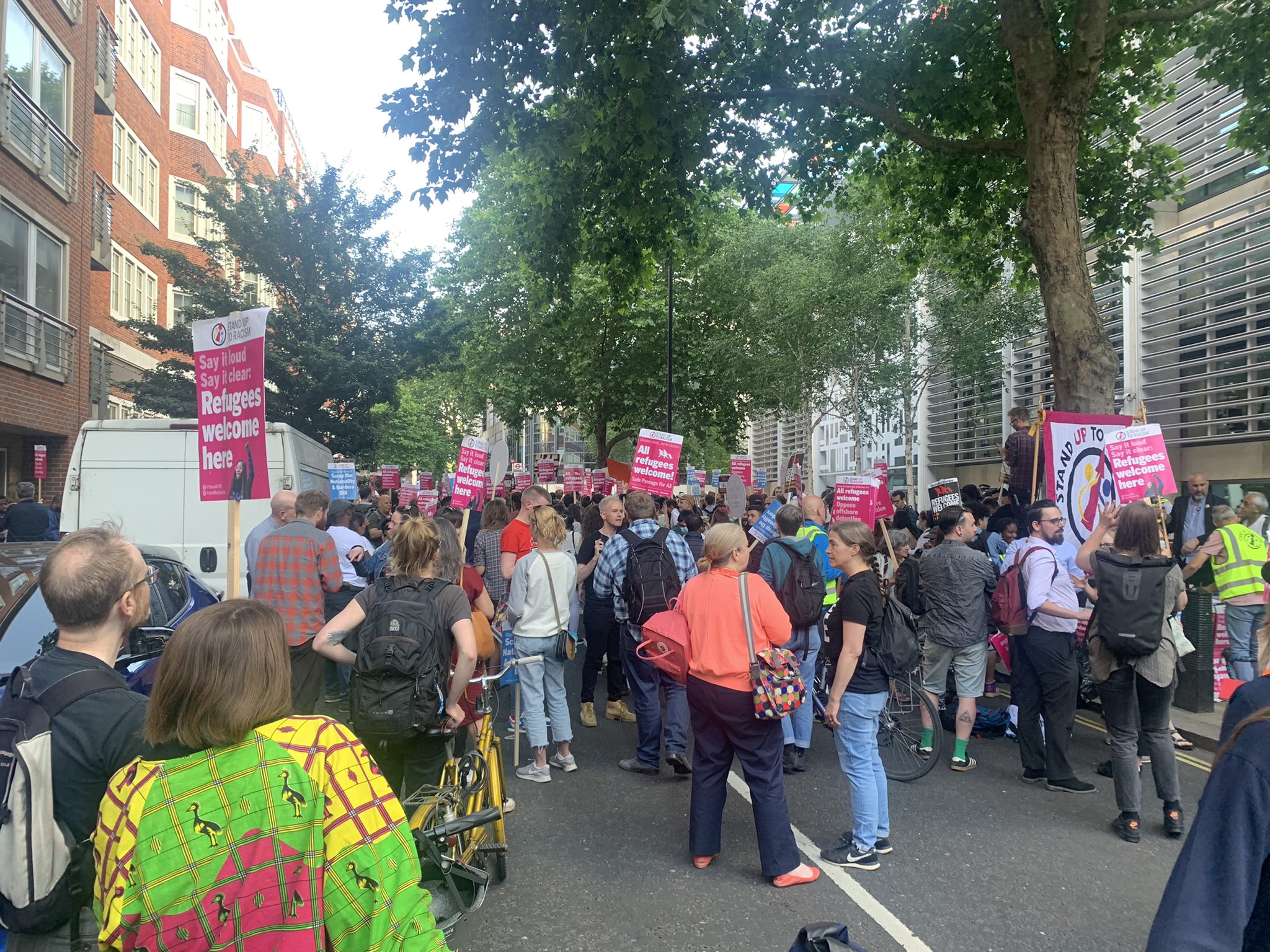 The campaign to stop the Rwanda flight has stepped up since we published our report last week. On Sunday, protesters gathered at Brook House, Gatwick, where refugees are being detained prior to deportation. Their chants of “No Rwanda” were echoed by detainees on the other side of the barbed wire.

More protests were due on Monday in Downing Street, at the Home Office and at the Courts of Justice, after a High Court judge refused a legal challenge to stop the flight ahead of a full court hearing planned for next month. The Court of Appeal has upheld his ruling. But further legal challenges from Asylum Aid and Freedom From Torture are still being heard.

Meanwhile, thanks to the legal team from Care4Calais who have been working with all those known to be at risk of deportation to Rwanda, the number of people scheduled to leave today has gone down from 31 to eight. If you do nothing else, please consider donating to their appeal for funds to continue the legal challenge.

Most of those at risk are victims of torture, trafficking and other forms of abuse. Care4Calais have been tweeting stories like this.

Today I had the most amazing phone call. A man who has suffered the worst torture I have ever had described to me has just had his ticket to Rwanda cancelled. For at least ten minutes we have both cried on the phone with total happiness and relief.

Church leaders, Prince Charles, the United Nations Refugee Agency, refugee charities in the UK, opposition politicians and even some Tories, have united to condemn the policy as illegal, immoral, inhumane, too expensive and doomed to failure. But even if the government could overcome all these objections, the biggest question remains. Why Rwanda?

Rwanda is at the centre of an area of war and instability. The neighbouring Democratic Republic of Congo (DRC) is in a semi-permanent state of war with Rwanda and itself. The M23 rebel movement is widely regarded as a proxy for the Rwandan government and, when it seized the town of Bunagana on Monday, the DRC openly accused Rwanda of an act of war, saying it was ‘no less than an invasion.’

In 1994 Hutu supremacists in Rwanda launched a genocide against the Tutsi people while the rest of the world looked away. 800,000 people, including moderate Hutus, were massacred. Rebel leader Paul Kagame and his forces ended the massacre, and he became ruler of Rwanda.

Since then, he has been showered with praise and billions in foreign aid from western governments whose collective guilt blinds them to the knowledge that Kagame is a corrupt and cruel dictator. Many thousands of Rwandans are now refugees. He sends assassination squads abroad to kill his critics in exile. He sponsors wars that have seen tens of thousands of deaths amongst Hutus in the DRC. Even the UK condemned Rwanda’s human rights record months before signing the deal to send refugees to ‘one of the safest countries in the world’!

The government could end this by taking up France’s offer for us to carry out assessments on French territory to grant asylum and provide safe travel to refugees who want to come to Britain. That would be the decent thing to do. Instead, Tory MPs cheered in the House of Commons when they heard that today’s flight would go ahead regardless.