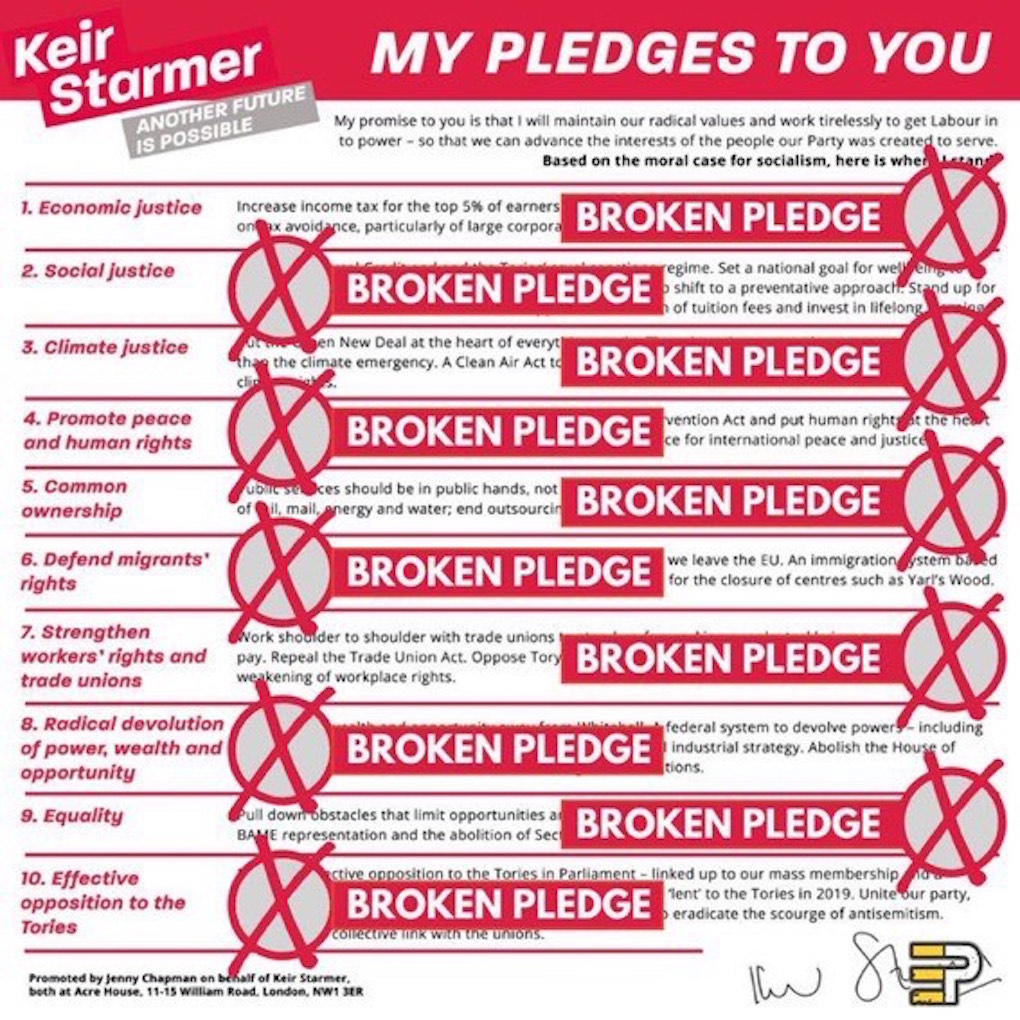 ALMOST everyone in the UK – and abroad – knows that Boris Johnson lies; we’ve become so accustomed to it that a more shocking headline might read ‘Boris Johnson caught telling the truth’. It gets a fair bit of media coverage, as it should, but what is interesting is that the lies told by Starmer and cohorts don’t get nearly as much attention, unless you’re a Daily Fail reader that is.

Labour Party members and ex-members are well aware he lied in his leadership campaign with his Ten Pledges and promises of unity; his praise for Jeremy Corbyn only to then suspend him from the Party; his firing of Rebecca Long Bailey for simply sharing a newspaper article online; the anti-racism stance while ignoring Islamophobia and endorsing Zionism, while again ignoring what is happening to Palestinians. He even lied in Parliament last year about the European Medicines Agency; there is video evidence of this but where is it in the mainstream media? And why aren’t Labour supporters concerned about these lies?

Now that ‘Beergate’ has taken over from ‘Partygate’, Starmer supporters are attempting to paint it as a case of ‘Johnson’s lies are worse’ or even ‘It was not a lie’, but the fact remains that he and others did lie about the event in Durham where they were caught on camera drinking beers when it was against lockdown rules. They also denied Angela Rayner was at the event and then admitted she was, all the while claiming it was an ‘honest mistake’.

And they still insist they broke no laws. Yet, at that time, any gathering indoors with people from outside your household or support bubble was against the law, although there was an exemption for ‘work purposes’, and it is this Starmer and co are clinging to as their defence.

One year ago, at the end off April 2021, Starmer was pictured with a bottle of beer in the office of City of Durham MP Mary Foy ahead of the Hartlepool by-election. The party quickly said he was in the workplace, meeting a local MP in her constituency office and participating in an online Labour event. But they denied Deputy Leader Angela Rayner had been there.

Speaking to Sky News, Starmer said his party made a “genuine mistake” when it said Ms Rayner was not at the event in Durham. Asked if the deputy leader was at the office, he said: “Yes. We were in the office, we were working, we paused for something to eat, there was no party, no rules were broken and that is the long and short of it.” So, if no rules were being broken, why did the Party issue the denial over Rayner being there?

Personally, I find the whole Durham saga to be sad and pathetic, but the fact that the Labour Party lied about it, whilst condemning (rightly so) the Tories for lying, doesn’t just have the stench of hypocrisy about it, it is putrid. And it is not the least of the Party’s lies.

Labour is making big noises about the upcoming local elections, promising all sorts of things should the public vote for them, and many are believing them. But a vote for Labour on May 5th will not have any effect on the cost of living, it will not give you the promised ‘up to £600’ off your energy bills, it will have no effect on the NI hike, small businesses will not receive discounts of up to £5,700, 19 million homes will not be insulated. These are local elections which have no bearing on national policy whatsoever, and yet the Labour Party are putting out propaganda that, by voting Labour this week, you will suddenly be so much better off.

Labour’s lies – those we know about – may not be as big as Tory ones, but they are falsehoods nonetheless. Starmer has lied since his leadership campaign and continues to do so. He has broken his pledges and made it clear he would be willing to break them again. The fish rots from the head down.

You have an opportunity on May 5th to let both the Tories and Labour (and of course Lib Dems, which rather goes without saying) know what you think of liars.