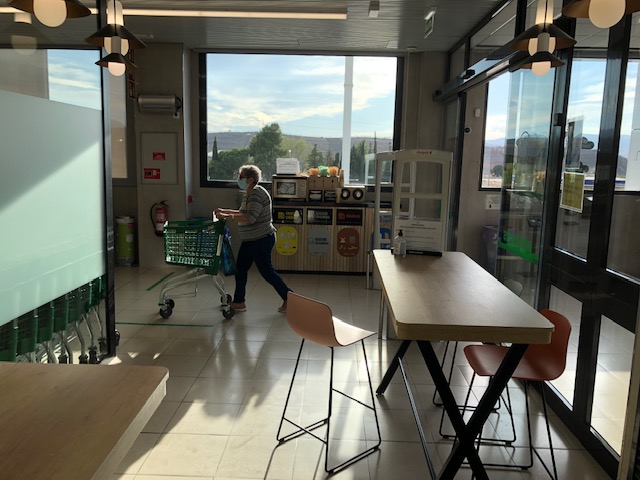 The community kitchen in Macadona

Whilst the UK hosts #Cop26, Spain launches war on food waste, animal welfare reforms and packaging that will transform the way we shop and the way all food outlets operate by 2023.

As #Cop26 kicks off it’s easy to underestimate the impact of food waste, logistics, and animals and farming on our environment, and whilst France and Germany have started to make inroads, it is Spain that is leading the way with the most radical food waste, animal welfare and packaging laws in the world.

Spain’s government has just introduced the country’s first-ever law regulating the use and disposal of edibles which will transform the way supermarkets look and operate that will be radicalised by 2023 when these laws kick in, will also see the total ban on pet shops in Spain. Kath Duncan Equality and Civil Rights Network have long campaigned against the practice of having pet shops in the larger supermarkets whilst the war on food waste and packaging will also see a major review of animal welfare with every dog owner by law having to go on a dog awareness course before getting a dog. Whilst these proposals were won by animal rights activists, they have in the short term had to accept the Spanish Supreme Court’s decision about the banning of Bull Fighting, that it is crucial to the cultural heritage and identity of Spain, so this alone will keep animal welfare activists fighting on.

The Council of Ministers has taken on board warnings from the United Nations’ Food and Agriculture Organisation (FAO) and its Sustainable Development Objectives (SDOs), which are based upon figures showing that a third of the human food produced on earth every year is thrown away uneaten.

According to Spain’s Ministry for Agriculture Fishing and Food, in 2020 alone, a total of 1.363 billion tonnes of food was binned whilst the figure is much higher in the UK.

Putting this in perspective, says the ministry, it means every single person in Spain chucks out 31 kilos of food annually – the equivalent of the average body weight of a nine- or 10-year-old child per inhabitant every year, whilst supermarkets within the UK alone spend £40 a ton sending food that is perfectly good to eat to landfill.

The negative effects of food waste mean that land for crops and grazing is used which does not need to be – often resulting in deforestation, chopping down trees that provide oxygen and reduce harmful carbon dioxide emissions. Chemical fertilisers are hard to avoid in mass production, which is why organic produce is more expensive as less of it is yielded in an average season. Water is used for food which goes straight into the bin, and energy is consumed and, with it, emissions that trap heat within the earth’s atmosphere, when it could have been saved.

In the case of the meat industry, food produced and wasted means huge numbers of animals are bred and killed unnecessarily.

It is no secret that enough food is produced on earth to feed every single one of its 7.44 billion inhabitants adequately. However, even with current production volumes, 50% more than necessary is generated worldwide; whilst one half of the world has an obesity crisis, the other half are starving. Today more people globally will die of poverty and its impact than ever will of Covid 19.

What it means to you

Spain’s new ‘food saving law’ aims to ‘steer towards a more efficient production system’ which ‘focuses on the development of a circular economy’, and requires all industries throughout the food chain, from the primary or agricultural sectors through to retail and hospitality businesses, to have a plan in place to cut waste. The side effect of this would be to see food banks close and farmers encouraged to plant trees, not knock down more to create beef or pig farms leading to the devastating impact this has on the environment. Already supermarkets are reducing packaging by turning their spaces into old fashioned food markets in which you buy what you need without having a cupboard full of spices and so on you only use once. Others are trialling things, such as the supermarket giant, Mercadona, (see Image photo) introducing in-house community kitchens. You buy what you need each day in-store and cook and eat in what was once the canteen and recycle your waste as you eat, tackling food poverty as well as waste and its negative impact. This is a model I am looking into with a supermarket in the UK and hoping to trial here.

How it will transform hunger

A ‘hierarchy of priority destinations’ (Food banks, Community kitchens, animal rescue centres) for food that has not been used or sold will be introduced, and businesses that do not comply could face hefty fines.

Unsold, but perfectly edible food should firstly be donated to food banks or other, similar charities; if they cannot be, but are still in a good condition, they should be used to make other types of food – for example, inferior shapes and sizes of fruit can be turned into juice or jam by manufacturers who cannot sell them to shops or supermarkets – or, if they are not ideal for human consumption but are not actually mouldy or toxic, they should be used to make animal food.

If goods are unsuitable for consumption by any human or animal, no matter how they are cut, mixed, or juiced, they should be destined for industry, to create biomass as a fuel source, or as compost.

Fruit and vegetables that have ‘gone off’ could also, in theory, be buried in soil and allowed to grow into new crops.

Understanding better training and greater awareness: Sell By, Use By dates.

Everyone working along the food chain will in law be given full training by their employees on the correct handling, storing and transporting to prevent damage, and all industries working with food must have suitable facilities to ensure optimum freshness – such as enough refrigerator or freezer space, or refrigeration units for shipping.

Supermarket food items that are getting close to their ‘use-by date’, or which have gone past the ‘best before date’, but are still in good condition, should be sold at reduced prices and separated from those still ‘in date’, or can be donated.

In reality, ‘best before dates’ are typically cautious and, once expired, do not mean the food item is automatically unsuitable for consumption – it means they may start to lose quality, flavour or both after that date, although this is not always certain and goods might still taste exactly the same a day or even several days after the ‘best before’.

And in the case of certain fruits, for example, they can in fact be even more suitable for their purpose once they are considered to be ‘past their best’.  Bananas make better milkshakes and smoothies when they start to go soft, and the recipe for banana bread actually stipulates the peel should have gone black before it is used.

Bars and restaurants also have food-saving rules to follow – they must give customers the option to take home any parts of their meals they cannot eat at the table, at no extra cost.

In practice, the majority of restaurants in Spain already do this.

Schools, hospitals, and similar public institutions will have to make a conscious effort to avoid food waste, which could mean not overloading a pupil’s or a patient’s plate, if the person stresses they are not very hungry, and will have to follow the same donation-juicing-animal feed-compost hierarchy as supermarkets and restaurants.

Local, seasonal, and organic must be encouraged

All companies in the food chain are required to encourage sales and use of in-season, local and organic produce as much as possible, which could involve advertising campaigns about how they are healthier, more environmentally-friendly or help the local economy, or strategic shelf-placing, or reduced prices, or all of these.

Fines for non-compliance, when considered ‘serious offences’, range from £5,000 to £125,000, which the government says is to act as a deterrent, not as a new way to make money.

These ‘offences’ include impeding food donation or neglecting to do so, inadequate storage, handling and hygiene – behaviour which is also incumbent upon the food banks receiving the donations – or discriminating against who receives donated food, such as where poverty parcels are given to Spanish nationals only and denied to foreigners.

The latter is purely an example, as no reports of such a case are known about, and food banks and charities frequently stress that they exist to help everyone who needs them, not just certain sectors of society.

‘Less-serious’ offences attract fines of up to £5,000 and include not having an anti-food waste plan in place, not following the set hierarchy of sustainable disposal, not keeping a record of waste and informing authorities, or not having the mechanisms in place for edible unsold food to be donated.

Charities and food banks could face disciplinary action if they are given food donations and do not distribute them appropriately, or not at all, or leave them to go to waste.

Whilst researching this article, one of two, (My next article for Critical Mass will be on how Spain is turning the EU Social Inclusion policy and funding into groundbreaking projects transforming lives and entire communities) I travelled with British Airways, only to be given a non degradable bottle of water and a non degradable packet of crisps. I asked the cabin crew why in 2021 when we are hosting Cop26 is the National Airline NOT leading on food waste and plastics when there are so many options on the market? Should not our National Airline be showing the world that the UK is serious about this? And how will they deal with Spain’s laws come 2023. A polite member of the cabin crew said she would ask. I heard nothing more, but when you travel ask WHY they are NOT giving you biodegradable packaging. As consumers we could and should do more.

Ray Woolford is the Author of Food Bank Britain, co-runs the We Care Food Bank in London, and is CEO www.Kathduncan-equality-civilrights-network.co.uk Please go to this website for more information and support their work.

One thought on “Spain’s War on Food Waste”