Socialists and the Next Election 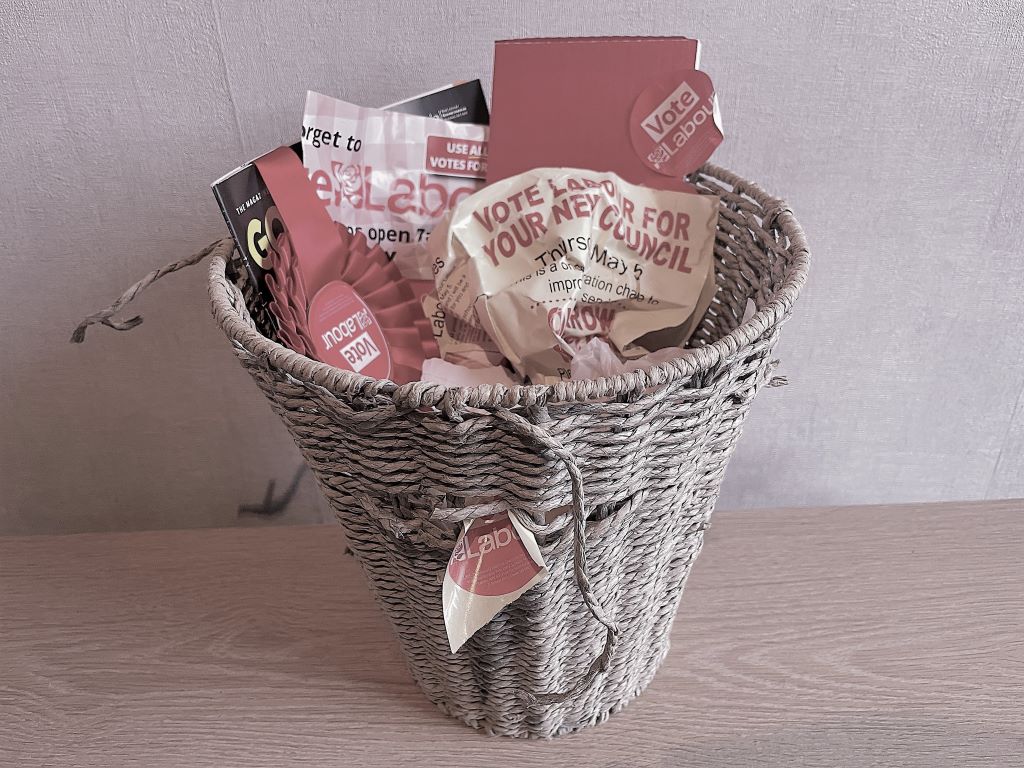 Labour in the Bin: Mike Stanton

It is fair to say that the team at Critical Mass is in broad agreement that Starmer’s Labour Party is an obstacle to socialism. But we have different ideas on what to do about this. Does the solution lie in changing our electoral system? Would some form of proportional representation be an improvement on our current system of First Past The Post?

Should we be backing socialist alternatives where possible, even though they have little chance of winning, or calling on people to abstain or spoil their ballot papers?

The Tories are so awful that at the next general election there will be a lot of pressure on socialists to vote Labour just to get the Tories out. If we publicly criticise Labour or promote socialist alternatives we will be called Tory enablers by the same people who disabled Corbyn’s chances of electoral success.

There will also be a parallel campaign for tactical voting in constituencies where Labour has little chance of winning. In practice that will usually mean voting Lib Dem. But can we ever trust a Lib Dem after their coalition with the Tories in 2010? And how will that help the struggle for socialism? I once lived in a constituency with a Tory MP who was so awful that I voted for the Liberal candidate because Labour were always going to come a poor third. For this I was berated by Labour members who argued that it was not about winning, it was about using the election to build support for a socialist alternative. This was the 1970s. You could still say that about Labour with some conviction.

At the time it was possible to argue for a Labour vote at elections because the Tories were obviously the class enemy. Furthermore, class conscious workers would always vote against the class enemy and if you wanted to get a hearing for socialist ideas the argument went something like, “Yes we have to vote Labour to get the Tories out, but will Labour be any different? They have betrayed us so many times. We need to build an alternative that won’t sell out.”

Then I stood as the SWP candidate in a by-election. At the time the Labour Government was polling badly, and the National Front was picking up protest votes from disaffected Labour supporters. The campaign had two aims; to present a real socialist alternative to Labour and counter the fascist influence, and to build the local branch of the SWP. We got a lot of hostility from the local Labour Party saying it would be our fault if the Tories got in. We argued that, if they lost, it would be a rejection of the actions of the Labour Government, their fault not ours.

In the event the NF bottled it and did not stand, and Labour scored a narrow victory over the Tories. I was a very poor fourth place behind the Liberals. After the election one local trade union militant approached me and said he had not voted for me. He had voted Labour to keep the Tories out. But he did join the SWP to get rid of capitalism. I couldn’t argue with that!

Those were the days when you could be a Labour MP and openly oppose NATO. You could be open in your support for Palestine and not be accused of antisemitism. During a referendum on the Common Market, cabinet ministers were free to campaign on both sides. You could even sell socialist newspapers at branch meetings and not be expelled!

Under Starmer the Labour Party is abandoning even the pretence of being a democratic socialist party. Right-wing Labour officials are removing all democratic elements of control over party policy. CLPs are micro-managed over what they can discuss. Parliamentary candidates are being imposed against the wishes of local party activists. There has been a witch hunt against left-wingers at the grassroots. Incontrovertible evidence of institutional racism, misogyny, Islamophobia and deliberate sabotage to undermine Corbyn has been ignored. Backbench MPs have been threatened with expulsion for supporting Stop the War and have shamefully acquiesced. Shadow ministers have been warned against supporting strikes. Corbyn has been expelled from the PLP and Starmer has said he will never be allowed to stand for Labour again.

The idea that Labour is more progressive than the Tories is no longer sustainable. It is an unashamed supporter of global capitalism. Labour might be less corrupt and less cruel to the poor and dispossessed if it wins office. But it will do nothing to challenge a system that is driving the world to destruction and it is openly opposed to anti-war and eco-socialist movements on the left. So, when it comes to voting, I will no longer be saying Vote Labour to Get the Tories Out. I will be looking for ways to use the election to raise socialist politics and build a grassroots socialist alternative to Labour. In 2019 I canvassed on the doorstep for Labour. Next time I do not even know if I will vote.