Short Conversations:  During the Storm 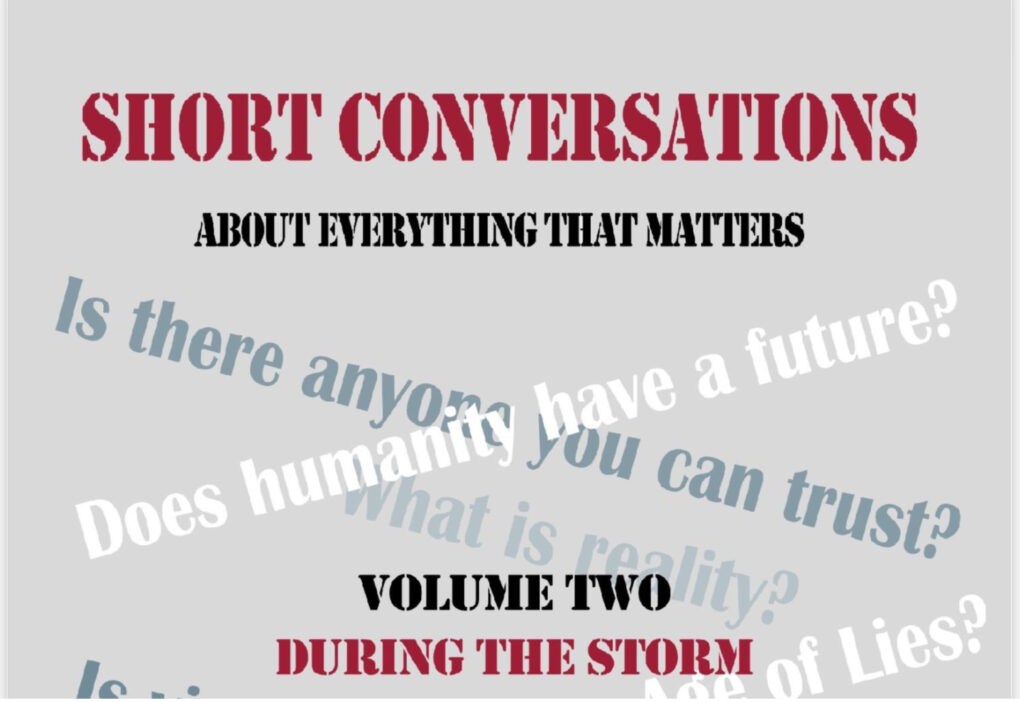 Short Conversations:  During the Storm, is Luke Andreski’s new book, which discusses, among other things, the Climate Crisis, and follows on from Short Conversations: During the Plague, published last year during the Covid pandemic. Luke’s work is not just a response to current events. His concern is with ethical renewal at a time when we seem to have lost our collective moral compass. Self serving elites have hijacked democracy and are leading us into the abyss.

These short conversations are not that short and some are a bit one-sided. The author is definitely in charge and his protagonist is more like a reader who interjects at key moments to enable the writer to respond along the lines of, ‘I’m glad you asked me that,’ before taking over the conversation again.

If you accept that these are actually monologues in which Luke is in conversation with himself, while using the dialogue form as a literary device, they are very well written. And, as Ben Okri wrote in A Time for New Dreams

It is form that keeps content new and perpetually alive.

Luke is not telling us anything new and it is tempting to respond by saying, ‘So what? I know that.’ It would be more accurate to say, ‘I thought I knew that.’ Luke reminds us of enduring truths in a novel way. And he does so in a form suited to our modern age.

Luke writes in a language and style that suits the age of the internet. These conversations could work as Twitter threads. (Like this thread from Luke, tweeting @EthicalRenewal.) The cartoon frames that are interspersed throughout the book will probably be ripped off as online memes if they haven’t been already. As a dutiful book reviewer I have read this book from start to finish but I can imagine it being sampled and reimagined on other platforms. Luke himself has provided samples of his work for publication on Critical Mass

What’s it all about?

So much for form. What about the content? The main argument of the book is contained within six sections.

The Enemy begins with a powerful opening which reminds us how wonderful human life is and that we live in a beautiful world, Luke moves quickly to identify the enemy: the corporations, the economic system that sustains them and the media that defends them.

Moment of Chaos describes the nature of the crisis we are in and how its enormity can be paralysing. We feel helpless so we are open to the dominant ideas in society that tell us resistance is futile. If the dominant ideas in any epoch are the ideas of the ruling class, these ideas are the ones that infect our consciousness, like a virus, and make us complicit in our own destruction.

Rebellion addresses a perennial question. If our minds are infected by ruling class ideas how can we shake off the infection and think for ourselves? Luke argues that resistance begins with personal acts of rebellion. Our brains are wired to get to grips with reality. That is how our species has survived, so far. The lunatics may have taken over the asylum but they have not yet won the war on truth and rationality. There will always be individuals who resist and seek out others to join the resistance. In a small way I like to think that Critical Mass is evidence of that.

In Weapons of Resistance Luke uses the analogy of the shield and the wall as essentially defensive weapons. The shield is a way of fixing our values to withstand the false values deployed against us. The wall is constructed on the basis of reality to give us a reliable view of the world. In essence we need an ethical and a cognitive toolkit to construct our own personal morality and our world view.

I confess that at this stage I was becoming a little impatient. Luke had given me a forensic analysis of the ills of the world. But his solutions seemed a little idealistic. Would sorting out our own twisted thinking be enough to straighten out the world? Especially when the forces against us are so strong. When Galileo was forced to recant his claims that the Earth moves around the Sun by the Inquisition, he is supposed to have kept his wall intact by telling himself, ‘And yet it moves.’ But he kept it to himself. As well as right thinking we need right doing. And we need to do it together.

Weapons of Attack looked more promising. As well as defending our own moral and cognitive position, we have to challenge the immoral, cognitive dissonance that is so pervasive. Anyone with a platform to challenge the status quo will find lots to work with in this section. How to use logic, humour, moral outrage. In media speak, how to stay on message and avoid your enemy’s weapons of mass distraction, or better still turn them back on them.

And then we have a long and useful list of small acts of resistance in Appendix A. (Appendix B is about independent news media and includes us, Creating Socialism’s Critical Mass, so thank you Luke.) It contains lots of useful ideas for individuals. Again I ask myself where are the useful lists of actions for collective resistance: join a union, go on a demonstration, start a petition, build a local action group? This, for me, is a weakness in an otherwise excellent book. I think this illustration from Luke illustrates my point.

Luke takes us through the first three steps from A new moral code to Core values with impeccable logic and great detail. And then there is a massive leap to First steps.

Admirable aims but hardly first steps. And no mention of who will do this and how they will achieve it. Moving from ethical philosophy to practical politics, this raises the twin questions of agency and organization. Perhaps I am being unfair. This is only volume two. Perhaps there is another volume where all my doubts and queries will be resolved.

Despite these caveats, I recommend this book without hesitation. It is an invaluable toolkit or manual for anyone who aspires to be an independent thinker in a world of group think, but wants to avoid the pitfalls and rabbit holes of the brave maverick thinker and remain anchored in reality and morality. This book may not be enough to change the world. But it might just change you. It has changed me. And that’s a start.

One thought on “Short Conversations:  During the Storm”