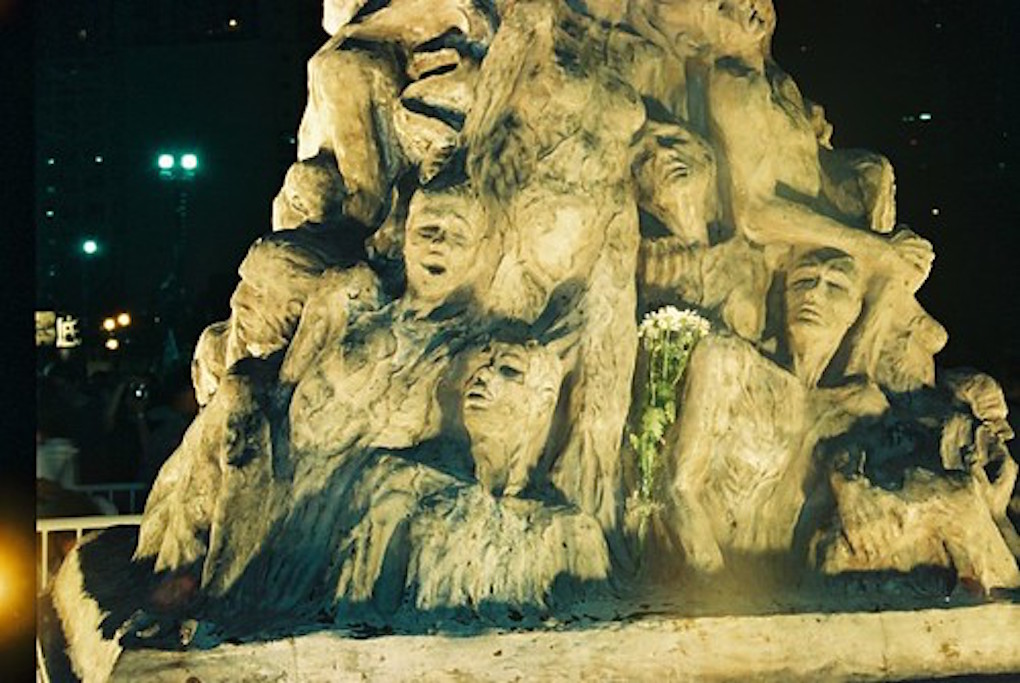 "Pillar of Shame (close up)" by chamarisk is licensed under CC BY-NC-SA 2.0

A STATUE commemorating the Tiananmen Square massacre, which has stood in Hong Kong for two decades, was removed overnight on Wednesday in what can only be interpreted as China trying to obliviate its past.

Initially standing in Hong Kong’s Victoria Park before being moved to the University of Hong Kong, the eight-metre tall statue, Pillar of Shame, depicts 50 twisted bodies piled on top of each other and was made by Danish sculptor Jens Galschiøt to remember the lives lost in the military crackdown in Beijing’s Tiananmen Square on June 4th, 1989. Hong Kong, along with Macao, had been the only places where such commemoration was permitted.

Since the national security law came into being in Hong Kong in 2019, more than 100 pro-democracy activists have been arrested, with critics saying it has rolled back freedoms promised to Hong Kong when it was handed over to China by Britain in 1997.

A candlelight vigil has been held at the spot on June 4th every year but two years ago it was banned by the authorities who cited the coronavirus pandemic as the reason for not wishing people to gather. But activists still turned up for the Tiananmen vigil last year, breaking through barricades and ignoring the ban. 24 were arrested.

A statement issued by the university yesterday said: ”No party has ever obtained any approval from the university to display the statue on campus, and the university has the right to take appropriate actions to handle it at any time.” Which rather begs the question why it has taken so long for them to remove it.

“Latest legal advice given to the university cautioned that the continued display of the statue would pose legal risks to the university based on the Crimes Ordinance enacted under the Hong Kong colonial government.”

The creator Galschiøt offered to take the statue back to Denmark provided he was given legal immunity from prosecution under Hong Kong’s national security law, but has had no success as yet. He called the removal “really brutal” and said he would consider suing the authorities and demand compensation.

This is a sculpture about dead people and [to] remember the dead people in Beijing in ’89. So when you destroy that in this way then it’s like going to a graveyard and destroying all the gravestones.

“It’s really ironic… I don’t think people would expect this [to] happen in the university,” he said, adding that the building was supposed to be a place that supported “so-called freedom of expression or freedom of speech”.

For many people, perhaps the most iconic image of the Tiananmen Square protests is the lone man standing in front of a line of tanks, but there were hundreds of thousands, some estimate a million, protestors in the Square. They had initially gathered in April, on the day of pro-reform politician Hu Yaobang’s funeral. Tens of thousands came together in a call for greater freedom of speech, and over the following weeks more and more protestors gathered in Tiananmen Square.

The government at first took no action, with officials disagreeing on their response, but those wishing to take a hard line with the protestors eventually won out and, in the last two weeks of May, martial law was declared in Beijing. Then, on 3rd to 4th June, troops began to move towards Tiananmen Square, opening fire, and crushing and arresting protesters. The number of people killed is still unknown, with the Chinese government saying 200 civilians and others saying thousands. The then British Ambassador to China, Sir Alan Donald, said at the time that 10,000 had died.

It was on June 5th that the now legendary ‘Tank Man’ moved into the path of the tanks and stood defiantly until he was pulled away. Nobody appears to know what happened to him but Time magazine later named him one of the 100 most influential people of the 20th century.

And now the Pillar of Shame monument has gone. China is silencing critics and dissidents in Hong Kong, a region which saw more than half a million of its citizens leave between the time of the 1984 Sino-British Joint Declaration and the date it came into force in 1997. They left because they feared an erosion of their civil rights and liberties when China took over, and it would appear they were right.

As the photo of that lone figure standing in front of the tanks was transmitted around the world it showed the power of just one person daring to stand up against tyranny. One man. One lone man who, by taking a stand, brought the attention of the world to Tiananmen Square. Now imagine millions of us doing this together when we see an injustice.