Scunthorpe workers in all out strike 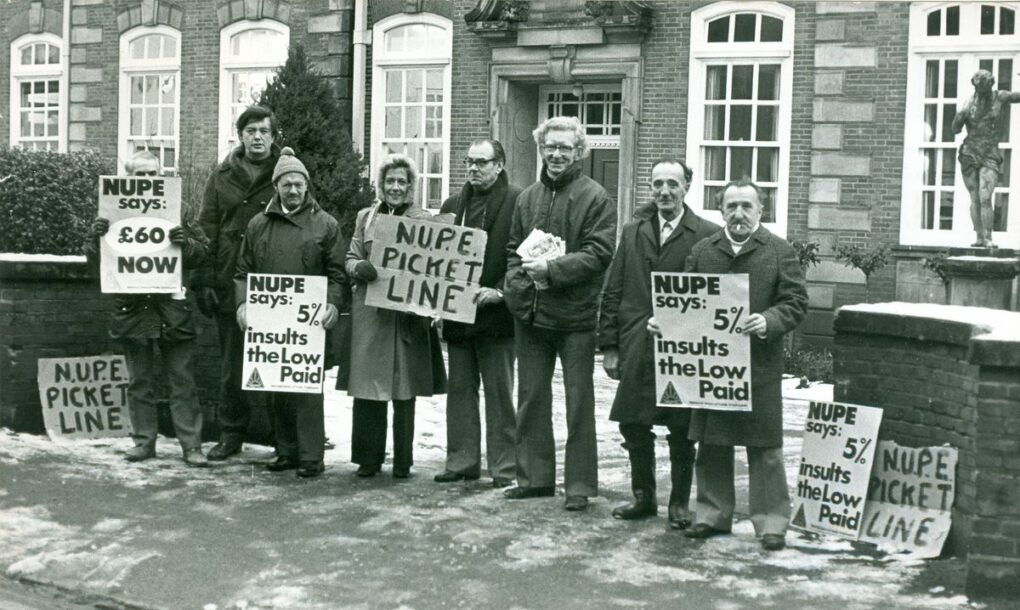 Strikers in 1979 during the Winter of Discontent

Over 60 scaffolders walked out last Monday following the breakdown of ongoing talks with their employer Actavo. The workers want to be paid the going rate for the job, but the company is currently paying them, on average, £80 a week lower.

The dispute began in 2019 when previous contract holders Brand Energy refused to engage with the scaffolders union, Unite the Union, and voted 100% in favour of strike action. The first strike occurred in January with a 48 hour strike on January 25th.

The scaffolders are responsible for the maintenance of over 500 scaffolding structures at the Scunthorpe site. Unite Regional Officer, John McIntyre, said at the time of the first strike: “There are clear pay rates established for this type of work and Brand Energy are deliberately undermining them. Our members play a crucial role maintaining safety on the British Steel site and deserve to be paid the correct rate for the job.” There are a number of similar small actions taking place across the UK, but does this add up to a winter of discontent?

The Winter of Discontent was the collective name given to a series of unrelated strikes which took place in 1978-79 opposing the, then, Labour Government’s pay restraints. It led to the Prime Minister James Callaghan being widely quoted as saying, ‘Crisis? What crisis?’ In fact, what he had said when prompted by a hostile journalist to comment on the crisis engulfing Britain was “I don’t see a crisis”. Nonetheless, it is interesting to compare the number of days of strike action recorded during the 3 month period from October 1978. Some 4,317,000 days of strike action recorded in 3 months. For comparison purposes, in the 3 month period up to December 2020 (and the start of the pandemic), there were only 156,000 strike days recorded.

The Labour Government of James Callaghan, like most Labour governments, was determined that any crisis was to be borne by the working class. Future Labour right-wingers learned their lesson, as did the Tories. Between 1980 and 1993 there were 6 acts of Parliament which were intended to restrict the ability of workers to take strike action. The Labour Government of Tony Blair, with a massive majority and 15 years in power, did not repeal a single one of those acts.

The Trades Union Congress notes: “Although unions have learned to use ballots as part of the negotiating process, they have imposed increasing financial costs, while the requirement to give employers seven days’ notice further reduced unions’ ability to respond quickly and potentially reduced the effectiveness of any action they took.” What the TUC historians fail to mention is that the majority of unions never lifted a finger against any of this legislation for fear that their funds might be “sequestered”, meaning that the highly paid officials would not be paid.

We have a number of strikes taking place at the moment. All conducted within the constraints laid down by hostile governments. Those governments are from both the Conservatives and Labour. Whilst Jeremy Corbyn, when still leader, had pledged to repeal the anti-union laws, that pledge has been quietly dropped by his successor. And few, if any, union leaders are pushing for the legislation, which restricts their members’ ability to fight back against exploitative employers, to be removed, or even amended.

Some might say that it is a testament to the tenacity of workers that there are any strikes at all. Whilst that may be true, given the obstacles any group of workers have to overcome, it is equally a testament to the fact that, despite what some people may like to believe, capitalism has not changed much.

In an opinion piece in the FT in August, Martin Sandbu argued that the pandemic had given workers a new power. There were, and remain, labour shortages and this strengthens the position of workers who are available. Recently we have seen stories of the huge payments being made to lorry drivers. He argues that, temporarily at least, workers have a new found power and that they are turning down jobs they previously sought. Or are demanding better pay as they realise they are in short supply.

Whether or not this is true, it is very difficult to ascertain. But, if workers have any power at all, it remains through collective action. The problem is that workers will be fairly easily bought. The lack of any strong grassroots organisation within most unions is preventing another winter of discontent from happening. There are grassroots organisations, but the unions are a much reduced power in the UK.

In 1980, according to Stephen Machin of the LSE, 64% of workplaces in the UK had a union, by 1998 that was down to 42%. But the number of employees in unions fell even more dramatically. In 1980, 62% of employees were in unions; by 1998 that figure had fallen to 36%. And, according to Government statistics, the percentage of employees in unions is now down to 23.7%. What the statistics indicate is that trade union membership has become more concentrated in the professions and among middle earners. Nearly half of all trade union members earn more than £500 per week.

So we return to the word crisis. At one time it was union activity that was seen to be creating a crisis. Now, it is unions themselves that are in crisis. As one indication of the problems facing unions, nearly three quarters of union members are over 35, however, union density was highest among Black employees but lowest among Asian employees.

Unions are far from being irrelevant to the world of work. Very few workers can negotiate themselves a deal anything like as good as they would achieve through collective bargaining. Yet, for the past 5 decades, we have been sold the dream of an individualised life where keeping your head down, doing as you are told, not joining a union, and putting yourself and your family first was all that mattered. If the unions are in crisis it is because they have done little to counter those beliefs.

Marx on the unions

Lenin once famously remarked that left to their own devices workers would only ever reach trade union consciousness. Judging by recent statistics in the UK, many workers are not even reaching that level of consciousness. This might be because unions appear to be irrelevant. With the national minimum wage and talk around universal basic income why rely on old notions of class struggle and unionisation? These ideas, popular with many on the left, replace union activity with government decree.

Trade unions have always had a very restrictive idea of what their role was. As Marx noted: “They fail generally from limiting themselves to a guerilla war against the effects of the existing system, instead of simultaneously trying to change it, instead of using their organized forces as a lever for the final emancipation of the working class that is to say the ultimate abolition of the wages system.” The fact that it was this same trade union movement that gave birth to the Labour Party might give some people pause for thought.

Of course, all of this is a long way from Scunthorpe. Those workers currently pitted against an employer unprepared to pay even an agreed wage rate deserve our support. It is unlikely that their struggle will bring down capitalism, or the government, but we should watch with interest for inspiration in the struggles that are surely to come.

3 thought on “Scunthorpe workers in all out strike”