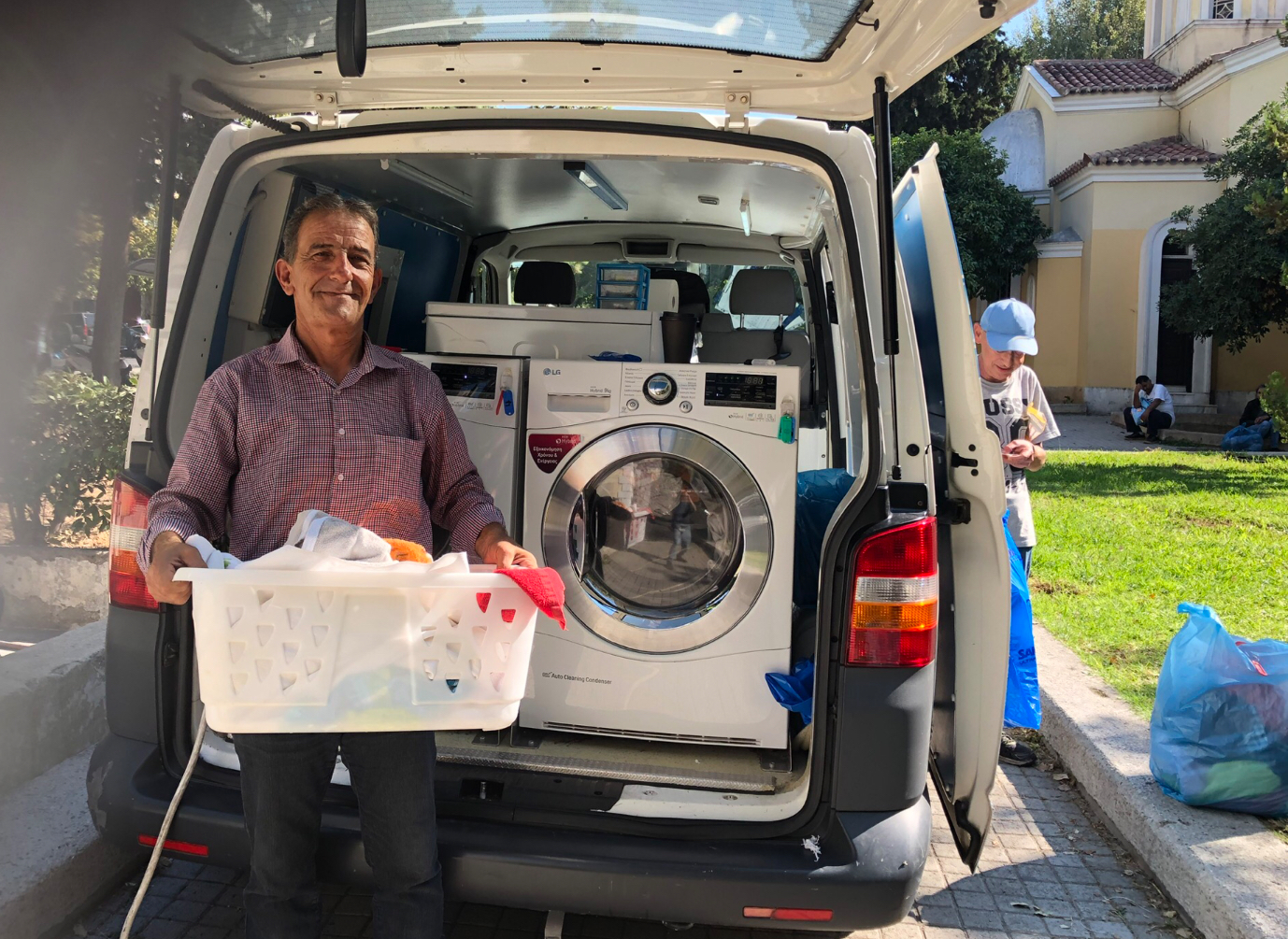 Rosa Marie has a smile that could light up a room, after years of struggling with alcohol and drug abuse. There is a new EU policy that sets out to transform the lives of those forgotten to Austerity through a new social cohesion policy that’s been interpreted by the Spanish Government in a totally radical new way of community engagement that is simply transforming the lives of thousands of people living on the margins of society like Rosa Marie. Thanks to this policy, she has a new job that she loves getting paid the going rate for, sweeping the roads with her dustpan and broom, a job that has given her self-respect and the love and the support of the townsfolk in Durcal, Spain. She keeps the streets there so clean, whilst checking on those alone, spreading news and gossip and, like the thousands of Rosa Maries in both towns and rural villages across Spain, transforming communities.

Fly dumping has seen dramatic falls across all of Spain, with some areas seeing an 80% fall, whilst the roads are so beautifully kept. This is because people think about their rubbish and no longer discard it on the streets and roads in the volume they once did. This policy does not target how many roads the sweepers must clean or the number of sacks they must fill. It works on the way it impacts on the creation of better communities, providing a greater sense of well being for all, and, yes, it does deliver greater community cohesion.

As I chat with Rosa, the local residents stop to give praise; if she is unwell, they take up her broom and sweep the streets for her. The sense of solidarity has given her not just her self respect and pride back, but she has a new home and is about to have her kids returned to her, helped in part by the community network she has built up with her broom and dustpan and by her determination to use this as an opportunity to claim her life back.

Whilst Social Media and the mainstream media pumps out doom and gloom, it’s far too easy to forget that some of the most extraordinary activism and community empowerment is happening NOW, globally, by communities mostly with no government or council funding. During the Covid lockdown, communities failed by the system created their own support networks, like my own We Care Food Bank. We set up a network of volunteers to buddy with people shielding and this fed over 5000 people a month without any Government or Council funding. It succeeded just through the kindness of strangers and a We Care go fund me page, that lead to a multi-award-winning film Feeding Lewisham. This was made free of charge and communities globally are watching online for free to learn and copy.

But it’s not just Great Britain and Spain that are fighting back. Activity going on in Greece is also inspirational when you realise how poor the country is, after getting screwed by the EU in that famous deal that only gave business corporations a happy face.

Never arrive at Athens after midnight, whatever the guide books may say, for a taxi is probably the most expensive part of any trip to Athens and, at double the rate after midnight (around £60), that cheap flight from Stansted Airport does not appear to be the bargain it seemed. Taxi rates here are per person.

Athens gets a rough press. The appalling tragedy of the refugee and migrant crisis has hit Greece’s tourist sector, with tourism down by 80% on the beautiful islands. Athens itself, still suffering from austerity as part of its EU salvage deal, is hit by a double whammy. Yet this city is nothing like I was expecting and so much better for it. The roads are clean and the doorways of its high streets, unlike London, are not populated with the homelessness that shames London and many other cities in Europe. Greece offers exceptional value; a coffee is £1.50, a meal less than £5. Hotel family rooms can be secured from £20 with breakfast. Whilst many may come for its history, Athens street art is what takes your breath away; the scale, the quality, the simplicity.

They may not have our Banksy, but they have something very different and a real asset to those who come to see this wonderful city. Athens is neither run-down nor are there soup kitchens or tent cities on every street corner. It’s a proud place. Victoria Square is what is described as the ‘run-down’ part of town in which the refugees remain, sometimes for years, awaiting the paperwork that will set them off on their dream of a better life.

As I sit in the beautiful Victoria Park, smartly dressed men and women sit waiting, day after day. They wait for news, friends, or family so they can themselves move to the next stage, be it on foot, with or without papers, or in the back of a people traffickers’ lorry to Italy and onto the UK, Germany, or elsewhere.

These people have skills we can use and yet we put walls up to cut off an economic resource our NHS, our farmers, our public sector desperately need. Until we as voters demand a different mindset, the only people who benefit from this misery are the people traffickers. These people will find a way, however long it takes. Is it therefore not better to welcome people with skills? Does it not make our lives better and the world safer?

At the entrance to Victoria Park is a small van, clearly marked in English. Whatever country people travel from, the international language is English; something that should make us proud. The van is connected to the park’s water and power system and tours different parts of the city, offering a free launderette service.

In another part of the city, I sit and talk with those who run a needle-exchange van that has done wonders to transform the HIV rates and the discarded needle problems. It’s controversial, as it is in the UK, but the Mayor funds this project and slowly it has transformed troubled areas. Yes, in an ideal world, drugs would not be something we tolerate, but we do not live in an ideal world. Greece may be the Cinderella of the EU, but it still has its heart and its values. Its politics may seem extreme to those looking in, but, as one political commentator told me, echoing a view held widely on the street, Greek politics is like football: they all play the same game, they just wear a different coloured shirt. Brexit is as divisive here as in the UK, but somehow Greece has, against the odds, pulled through. The wages are low; it’s not uncommon to find people earning just 1 euro an hour here. However, the city feels like it’s a place to come; it’s vibrant, it’s cool, its city areas offer the diversity that attracts people from across the world to return. Nevertheless, its refugee crisis has, as in many other places, led to widespread scams.

As part of my visit, I tracked down social media groups that had been showing films as a way to raise cash. I should not be surprised that all the organisations who were running Paypal accounts in their own name either vanished the day I arrived, spent days delaying my visit to them, or canceled by just not showing up.

For the record, the state pays rent for ALL refugees. They don’t need to live on the street, so don’t give cash to people claiming to house rape victims, beaten women, and others. Also, every child can go to school once on the Greek mainland, there is NO need to donate to schools in Athens; it’s just another scam.

Greece is a ‘must visit’ between the months of November to March. All the main Greek temples and museums are just 4 euros. Food prices are low, which reflects the low wages paid here, and your pound, whatever the exchange rate, probably goes further here today than in any other EU city. With the apps available these days, it’s a great idea to walk. The streets are alive with cafe culture, vibrant street art, and flea markets outstripping any other EU city. The Gazi student area offers a nightlife that allows you to capture the essence of Greece. It may be poor but it’s proud. It’s beautiful on every level.

Please don’t allow the scary headlines to put you off coming. Everyone is welcome in Greece, it’s just the rest of the world that needs to give Greece a helping hand and never think you alone cannot make a difference. Our politicians maybe failing us, but we can count on each other, can’t we?

To Support the work of We Care Food Bank