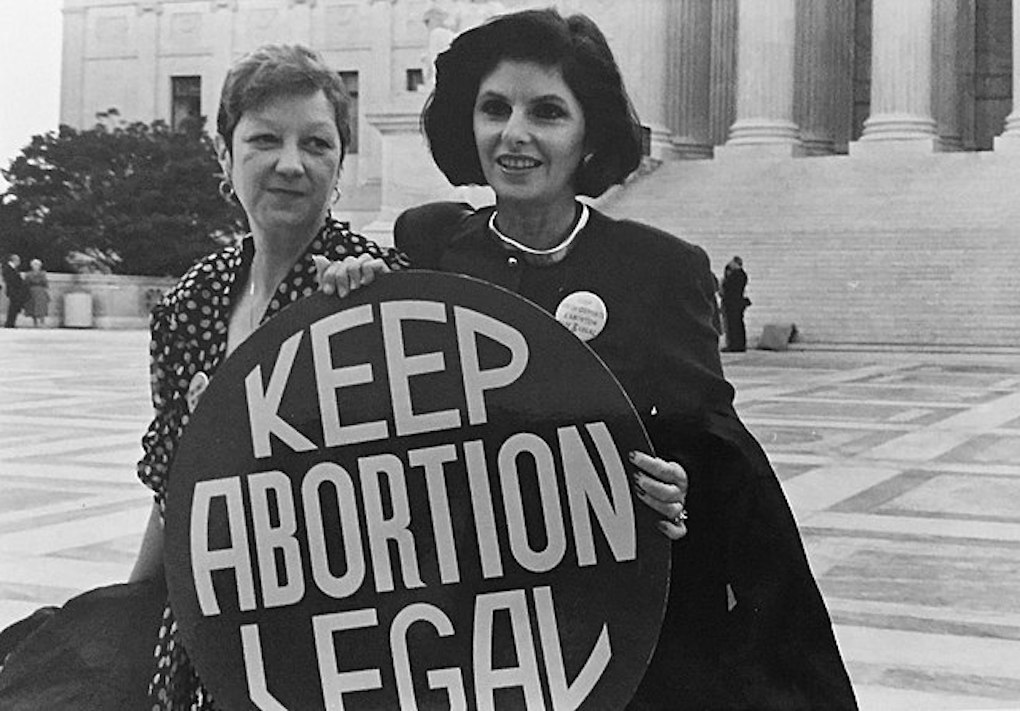 Norma McCorvey (Jane Roe) and her lawyer Gloria Allred on the steps of the Supreme Court, 1989 Creative Commons Attribution-Share Alike 2.0

The Supreme Court of the USA (SCOTUS) draft majority opinion on Roe v Wade has been leaked to Politico. The leak sparked outrage and protests outside the supreme court building. Politico reported:

“The draft opinion is a full-throated, unflinching repudiation of the 1973 decision which guaranteed federal constitutional protections of abortion rights and a subsequent 1992 decision – Planned Parenthood v. Casey – that largely maintained the right. “Roe was egregiously wrong from the start,” [Judge Samuel] Alito writes.

“We hold that Roe and Casey must be overruled,” he writes in the document, labeled as the ‘Opinion of the Court.’ “It is time to heed the Constitution and return the issue of abortion to the people’s elected representatives.”

The Roe v Wade SCOTUS ruling occurred in 1973 when Norma McCorvey (‘Jane Roe’), a resident in Texas, challenged the state’s ban on abortion. Wade was her local district attorney and McCorvey’s lawyers filed a lawsuit alleging that the ban was unconstitutional. They won in Texas, but the state appealed to SCOTUS which ruled 7-2 that the constitution has a ‘right to privacy’ which protects a woman’s right to choose an abortion.

Ever since that judgement, religious and right-wing groups have been working to overturn it. In recent times, since Joe Biden’s win, Republican-lead state legislatures have introduced draconian anti-abortion laws. CNN reports that 13 states have enacted ‘trigger laws’ designed to come into effect if Roe v Wade is overturned by SCOTUS. Ohio is a state planning to bring in a law which would not allow a woman or a girl to have an abortion even if the child was conceived through rape or incest. Some states are even planning to prevent a woman travelling to another state for an abortion.

The assault on women’s rights is not unexpected and it has been facilitated by Republican presidents, most recently Donald Trump, packing SCOTUS with conservative judges. But the Democrats also bear responsibility for the situation. In his 2007 election campaign Barack Obama promised to codify the right to have an abortion into law but failed to do so, despite having a majority in congress. In theory it is still possible for the Democrats to codify abortion if they remove the filibuster, but this looks very unlikely.

Unsurprisingly, many Twitter commentators are comparing the probable end of a woman’s right to choose abortion to Margaret Atwood’s book ‘The Handmaids Tale’, in which women are subjugated and forced to bear children for others. Atwood herself has commented, “It is really a form of slavery to force women to have children that they cannot afford, and force them to raise them”.

What this judgement and the proposed bans show is that the right’s ‘concern’ for the unborn child doesn’t extend to children who have been born. Once they have been born, they can be abandoned to lives of hardship and poverty. If only they cared as much about children and adults as they appear to do about embryos and foetuses. Make no mistake, the right-wing groups that are attacking and undermining women’s rights are Christian-fascists with a patriarchal vision of society. If they succeed, what will be their next target? Expect further attacks on the LGBT community and PoC.