Review: “Falling Down: The Conservative Party and the Decline of Tory Britain” by Phil Burton-Cartledge. 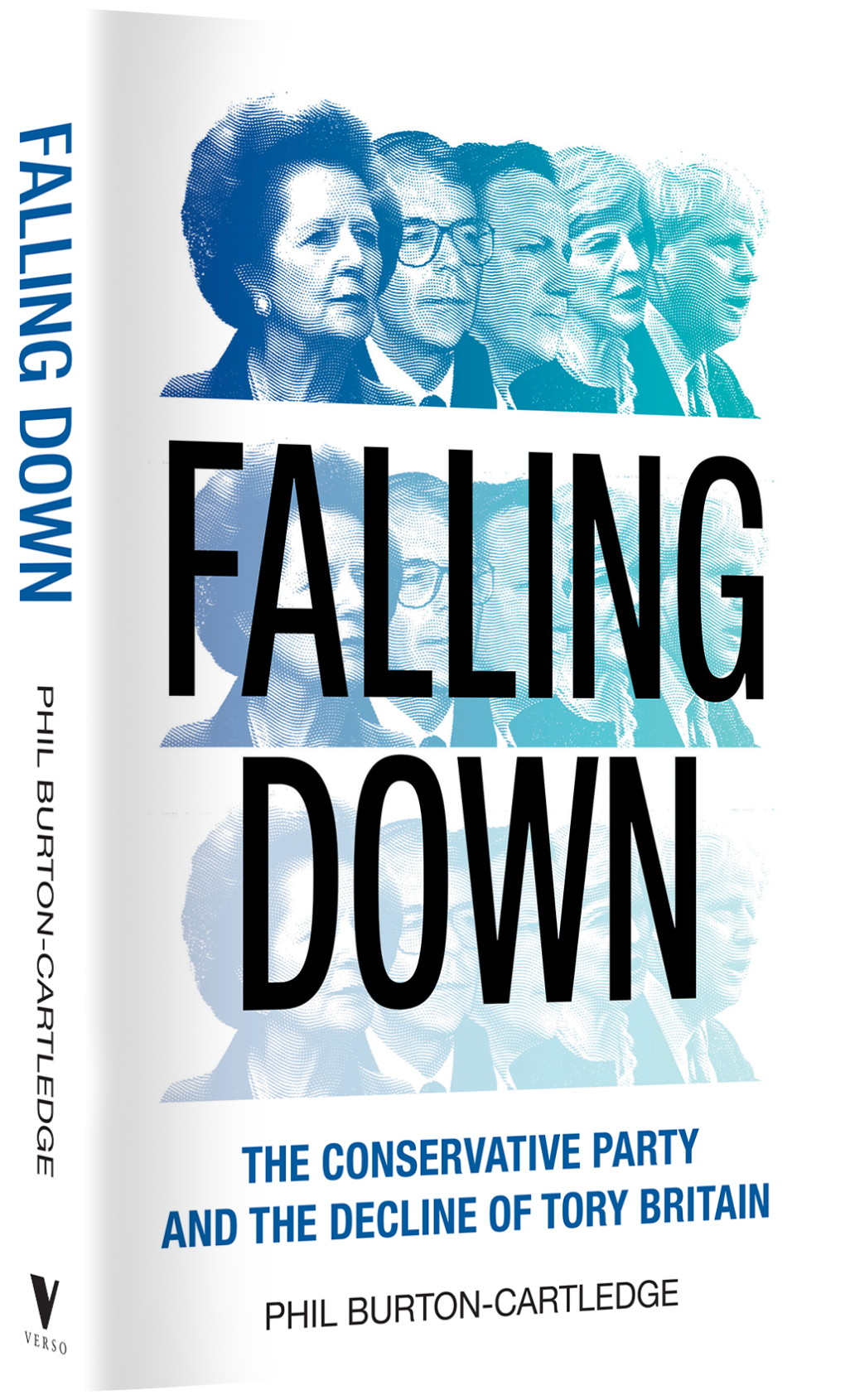 This newly-published book is a very impressive critique of the Conservatives, stretching across 42 years, from the start of the premiership of Margaret Thatcher, in 1979, to the continued failure of Boris Johnson, during 2021, to deal with the Covid pandemic. As the book went to press, Covid had led to the deaths of 128,000 people in the UK. As I write this review, the “official” Covid death total has increased to 134,000, based on the number of people who died within 28 days of a positive test. A more realistic figure, based on Covid appearing as a cause on a person’s death certificate, now exceeds 157,000. I would say that the Tories’ friends in the media prefer to focus on the lower figure but, in recent weeks, news bulletins on the BBC, ITV, and Channel 4 have simply stopped reporting cumulative Covid death total, preferring to allow plenty of room for government narrative that their vaccination programme is working. These are the vaccines developed by scientists, and delivered by dedicated NHS staff, while Tory ministers have handed over billions of pounds to their friends, running the outsourced test and trace programme, plus procurement of Personal Protective Equipment. Phil Burton-Cartledge suggests that the stigma of their Covid failure, which should stay with the Tories for a generation, does not show any sign of losing them popular support.

There are two strands to this book. On one level, the author provides a rigorous analysis of the way in which Thatcher transformed the British political structure, and practice, for the worse, but managed to hold the votes of millions of people. This is followed by the methods Thatcher’s successors have used, to largely retain this mass support. John Major carried on much of Thatcher’s work, until the Tories endured a massive defeat by New Labour, in 1997. Another Labour landslide in 2001, and a decent majority in 2005, followed as William Hague, Iain Duncan Smith, and Michael Howard struggled to rebrand the Conservatives. Eventually David Cameron, a pretend moderniser, took the Tories back to power in 2010, initially in Coalition with the Liberal Democrats, followed by unfettered Tory power from 2015 onwards. Cameron departed soon after the 2016 Brexit referendum, Theresa May struggled with Brexit, and a divided party for three years before accepting the inevitable, making way for Johnson, whom Burton-Cartledge dubs a “Creature of Havoc”.

The decline of Tory support

The second strand of the narrative argues that the Conservative Party face a serious decline in support. It is a detailed, and thought-provoking, theory. In summary, Burton-Cartledge argues the extensive evidence that people become more (small c) conservative as they get older, and therefore more likely to vote Conservative, can be given a wider application. Political party membership in Britain has long been in decline, and the Tories have seen a particularly marked reduction in recent decades. Added to this, many people who became small-scale allies of the Conservative Party’s representation of the propertied, in buying council houses and shares, in the Thatcher and Major privatisations of the 1980s and 1990s, are now retired and politically inactive. The younger generations have experienced relatively low pay, within an insecure labour market, while being priced out of decent homes, by rising house prices and rents, directed by Tory policies. As the years pass, this cohort become an increasing proportion of the electorate, and unlikely to give their votes to the Conservatives. While Tory membership has declined, the politically engaged have joined Labour, the SNP, and Greens in large numbers.

Burton-Cartledge hopes his theory can give the left grounds for optimism, and this is obviously welcome. On an initial reading, at least, I must declare myself a bit sceptical. A few months after Thatcher’s 1983 landslide, the first General Election in which I voted, “Thatcher and Friends: The Anatomy of the Tory Party”, by John Ross, argued that support for the Conservatives was in long-term decline. I read this book in 1984, and Burton-Cartledge recalls the work of Ross, in setting out a new case for decline. In the 11 General Elections covered by the new book, the Tories have won a majority six times, been rewarded with power as the largest party in a hung Parliament twice, and defeated thrice. Across a wider time span, as the author accepts, the Conservatives have generally been the strongest party, over a century and a half, since Benjamin Disraeli carried the 1867 Reform Act. As a political historian who spends a lot of time thinking, and writing, about long term trends, I cannot help being struck that the decimation of Tory support in 1832, 1906, and 1945 was followed by the party bouncing back into power, in various circumstances – it took two, nine, and six years respectively. The 1997 defeat led to 13 years of Tory misery, but they have been back in office for 11 years, and now enjoy an 80 seat majority, as Johnson persuaded people in 2019 of the over-riding importance of Get Brexit Done. Will millions of Leave voters be the new long-term supporters of the Conservative Party, worried by any Tory suggestion that Labour, the SNP, or Lib Dems might take Britain back to alignment with the EU, if not actually seeking to rejoin it? Despite multiple periods of capitalist economic crisis, and mass unemployment – exacerbated in the 1930s by the appeasement of Fascism – millions of people have consistently identified themselves as Conservative supporters, and aspirational workers who do not need the Socialism of Labour governments, or the collective strength of trade unions. I want to believe that, eventually, a progressive majority of working people will reject the ruling class and reactionary Conservative Party, but I am getting too old to predict this happening any time soon!

After this rather pessimistic interlude, I wish to finish by strongly endorsing the book. It is one of the most impressive surveys of the politics of my adult lifetime, or any preceding period, that I have read. Phil Burton-Cartledge argues that a strong left analysis of the Conservative Party is a prerequisite for tackling, and defeating them, and on this I strongly agree with him. He should be thanked for taking on the onerous task of reading, and interpreting, many Tory manifestos, policy statements, and Party Conference speeches. Throughout the book, his commentary on Conservative practice, and ideology, is backed up by extensive analysis of both national and local election voting data, opinion polls, surveys of the Tory membership, and economic indicators. From Thatcher onwards, Conservative leaders have sought to blend the economics of Neoliberalism with an increasingly centralised, and authoritarian, state machinery. This is brilliantly documented, and the author, as a University lecturer, is particularly strong on the Tory attack on education, and the linked curbing of trade union influence across the public sector, and wider economy. There are some signs of hurried writing, and editing, with some repetition, and factual errors. I cannot believe the author believes the poisoning of the Skripals, at Salisbury in 2018, actually happened in Shrewsbury, and am surprised the, normally reliable, editorial team at Verso Books failed to notice this! This can easily be rectified in a reprint. More importantly, I hope we will see revisions of this original and challenging book, as the years go forward, and the Tories go backward. Despite the often unattractive material, I genuinely found the book an enjoyable read. Phil Burton-Cartledge writes in a lively style, with good doses of satire, and a healthy distrust for “the fairy tales of Tory philosophy”.