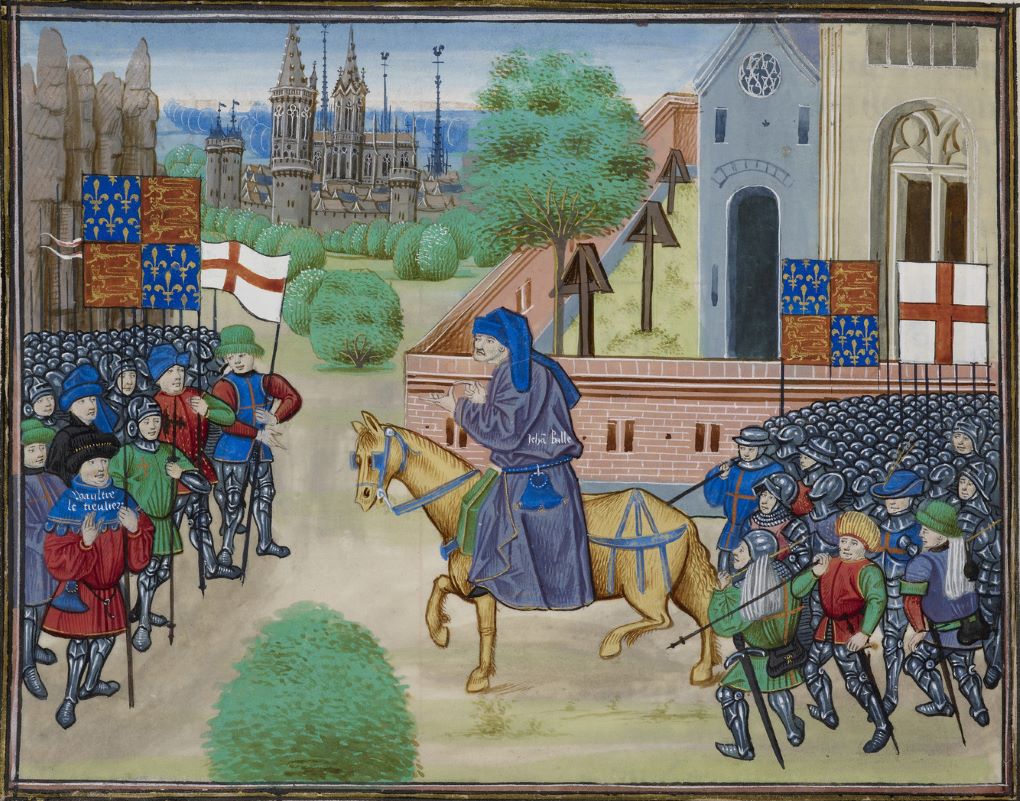 Religion is often a force for reaction. But even for those of us seeking to build a socialist heaven on earth rather than waiting for pie in the sky, it has served a revolutionary purpose at key moments in history.

A thousand years ago most of Europe was Christian but very few Christians could read. And the only version of the Bible was in Latin. You gleaned your knowledge from depictions in stained glass windows, from mystery plays and from the preaching of the Church.

This suited the Church. It gave them control of the narrative. The mediaeval Church of Rome derived power and wealth from its monopoly on salvation and just about everybody believed they had a soul that needed saving. Church attendance was compulsory. If you challenged the Church’s monopoly you were a heretic who risked torture and death.

All that money and power attracted some very unchristian people into the Church. Their corruption, immorality and political ambition dismayed some of the more devout and compassionate men who felt a real vocation. One of them was John Wycliffe, a priest and an Oxford scholar. He had a low opinion of the priests who were only in it for the money and he believed that the Church was itself a corrupting influence that came between men and their maker. He thought that priests were there to preach the Gospel and not be agents of social control.

He further believed that everybody had the right to read the Bible in their own language and commissioned an English translation that we know as Wycliffe’s Bible, published in 1382. But it had to be published in secret because in the same year Wycliffe was condemned for heresy.

It is significant that Wycliffe’s Bible was published in 1382, the year after the Peasants’ Revolt. I think the two events are connected although many conventional historians have treated them separately. To understand why, we have to go back to 1348, the year of the Black Death.

Between a third and a half of the population were killed in the pandemic. This destabilised the feudal system that had endured for hundreds of years, in which the great majority of the population were serfs, bound to the land and to the lord of the manor. Most lived in poverty while the lords lived off their labour. This was enforced by armed retainers. On top of that the Church preached that to challenge the social order meant hell and damnation and for good measure took a tenth of all that the peasants produced as a tithe.

For those who survived the Black Death things began to change. The severe labour shortage meant that landowners were competing for their services. Some feudal ties were loosened. Instead of working for nothing, more and more agricultural labourers were paid to work on the lords’ estates. When they started to push for higher wages they were so successful that a Statute of Labourers was introduced to control wages.

It stated that, “Every able-bodied person under sixty shall be bound to serve when required at no higher wage than in the twentieth year of the reign (i.e. 1341) or else be committed to prison.”

These laws were fought against and with some success. We know this because they kept passing new laws, with stricter penalties and widening their scope, not just to peasants but to the wandering priests who could be punished for spreading fake news. Of course, they were actually preaching the truth about the injustice of the lords and the corruption of the Church, as in the famous sermon by John Ball.

When Adam delved and Eve span, who was then the gentleman?

But they did more than preach, often at great risk to their lives. These wandering monks and priests formed a network of agents who could deliver letters and meet with village elders, help to organise peasants and agricultural workers, and build the resistance.

The crunch came in 1381. The English Kings had been waging expensive and ultimately futile wars in France for many years. In order to finance this, they were increasing the burden of taxation on the common people. Taxes had once been based roughly on your ability to pay. But the new Poll Tax of 1380 demanded a shilling, that was a month’s pay for most people, from everybody over the age of 14. It was to be collected by using gangs of men, basically armed robbers, as tax collectors.

There were spontaneous revolts and acts of resistance all over England. But when tens of thousands of armed men marched in columns from all directions heading for London in June of 1381 they were organised and co-ordinated thanks to the efforts of John Ball and his fellow preachers. And thanks to their military service in France, many were well armed and well-trained battle-hardened veterans. This was a force to be reckoned with.

At first, they swept all before them in a revolutionary war against a corrupt church and an unjust system. They were a disciplined force. Hated members of the establishment like the Archbishop of Canterbury and John Leg, the chief tax collector, where hunted down and executed. Lawyers, who drew up the legal terms of people’s bondage, were targeted and their records were burnt. But even when the rebels took London there were no random killings, no looting or other atrocities.

The tragedy of the Peasants Revolt was that they believed they could trust the King. His courtiers and advisors were hated and despised and the worst of them, no more than a hundred in number had been killed during the revolt. But the King was anointed by God. So the peasant army’s leader, Wat Tyler, trusted the King enough to leave his army for private talks. And when Tyler was murdered the King went to the peasant army to explain that Tyler’s death had been a terrible mistake, but he was still their King and would grant all their demands. They believed him and the revolution was over.

The counter revolution was just beginning. Of course the King broke his promise. He set loose his own dogs of war to hunt down all the leaders, including John Ball. 3,000 rebels were executed. But the ruling class was shaken by the revolt. In 1382 the poll tax was replaced with a tax on landowners only. The Statute of Labourers was repealed in 1390 and 40 years later England became the first country in Europe to abolish villeinage and serfdom.

Meanwhile the Lollards, followers of Wycliffe and revolutionaries who had survived the repression of the Peasants’ Revolt, had a new weapon to spread amongst the populace, Wycliffe’s Bible. They showed great courage in smuggling copies to congregations around the country at great risk to themselves. The movement was eventually forced underground and kept alive by the tradespeople and artisans in the towns and cities who would form the backbone of the Protestant Reformation in the Tudor period.

Paul Foot’s pamphlet, “This Bright Day of Summer” is the best short introduction to the Peasants’ Revolt that I know of. The classic account by Philip Lindsay & Reg Groves – The Peasants’ Revolt 1381 (1950) is out of print. Martin Empson has a review of it on his blog, The Resolute Reader, which also has a link to his own, “‘Kill all the Gentlemen’: Class Struggle and Change in the English Countryside.” Bookmarks have also published Mark O’Brien’s When Adam Delved and Eve Span, A History of the Peasants’ Revolt of 1381. Read on!