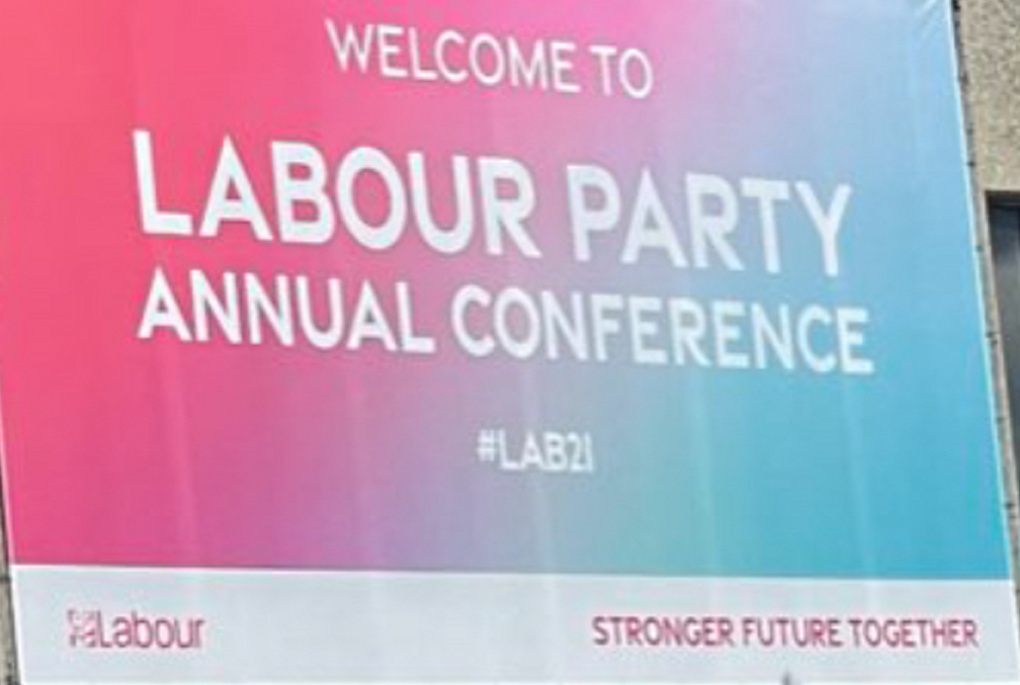 By Fiat Knox, reporting … from home (An outsider’s view of Labour’s 2021 Conference)

It’s been hard to describe the state of the Labour Party under Sir Keir Starmer (as of the time of writing, September 27, 2021); not because the issues are too complex, but because Starmer’s rushed policies and blatant toadying are unspeakable.

And the camera always cut to the party leader’s face, just to catch Starmer’s sour look. Starmer looked like a bulldog trying to lick vinegar from a stinging nettle. He does not like Rachel Reeves’ promises.

It makes you wonder whose policies he does like.

There was one good sign, earlier at Conference, when Angela Rayner denounced the Tories. And she used the words “a bunch of scum, homophobic, racist, misogynistic, absolute vile, banana republic, nasty, Etonians.” But the only word the establishment don’t like is the word “scum.” Even if they don’t mind if Tory MPs make jokes about sending bombs to Labour MPs.

The Labour Conference banner had an odd colour scheme. Because it looked as if the Labour red were turning into a Tory blue.

And commentators had some words to say about the banner outside the Labour Conference. Such as The Skwawkbox, who posted a telling article about it:-

It does look as if someone wants the world to know that Labour is turning Tory, doesn’t it?

Have you played a board game where someone tried to change the rules so that they would always win? Because it always feels like cheating.

And this is what happened at Conference, when Starmer changed the way Labour elects members.

But there are still moments of hope at Conference. Because the Labour Conference just passed this vote:-

And just to confirm, from a second source:-

And people are getting in some solid protests, such as the T shirt in the photo in this tweet. Although the blue background on the screens is off-putting.

Not All Over Yet

The Labour Party Conference continues until Wednesday, September 29. So the fight for Labour’s heart, and future policies, is still going on. And at least there is some hope left, for now.