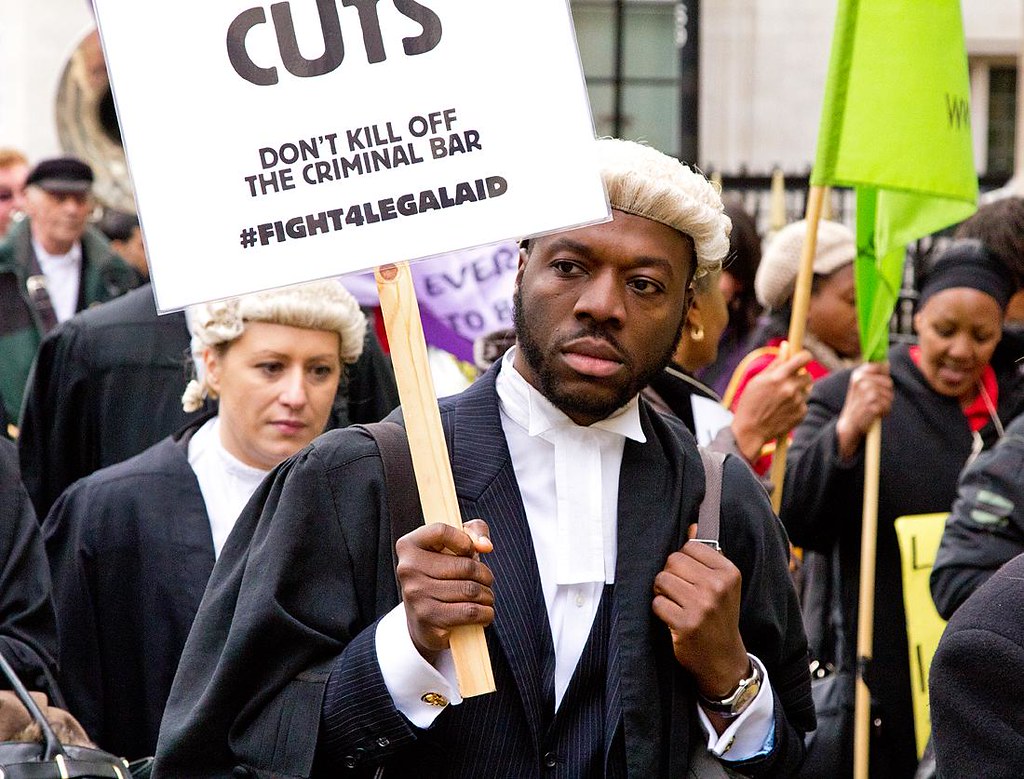 We've been here before. "Save Legal Aid, Westminster, London, 7 March 2014" by chrisjohnbeckett is licensed under CC BY-NC-ND 2.0.

BARRISTERS are on strike. The Government, in the form of Dominic Raab is telling lies and the opposition is sitting on its hands embarrassed to be seen supporting workers defending public services and their own living standards. Whilst this strike is certainly about pay, it is motivated more by the cuts in legal aid which have been taking place for a number of years and have resulted in a backlog of almost sixty thousand cases.

In a tweet, Dominic Raab, the joke we have for a Secretary of State for Justice, said only 43.5% supported the action. Perhaps it is unfair to remind him that the Conservatives received just 43.6% of the vote to become the Government. It is even more unfair to remind him that his own Government changed the law so that a strike ballot requires 50% of those eligible to vote to say yes to be legal. Does he really believe barristers, of all people, do not know the law?

Perhaps Dominic Raab, who is also Deputy Prime Minister, should look at the ballot result and get one of his, soon to be sacked, civil servants to explain it to him before making a fool of himself. The actual result, according to the Criminal Bar Assocation, was that 81.5% voted for days of action, with 43.5% voting for the highest form of action on offer.

The people currently striking are not well-paid barristers earning hundreds of thousands a year, but those doing legal aid work, often for a pittance. As the Criminal Bar Association, the trade union for barristers note:

The Independent Review published on 15th December acknowledged the serious attrition in the numbers of specialist criminal barristers and noted a decline in real terms in our gross incomes which were otherwise described as “not generous by comparison with other public sector emoluments”.

Labour turning its back

Whilst the Government’s view, as expressed by Dominic Raab, is to attack the strikers and to present their own inaction as somehow fair and justified, we might expect the Labour Party to have something to say on this matter, particularly as they are now led by a former Director Of Public Prosecutions (DPP). His Twitter account is surprisingly inactive for the Leader of the Opposition who can well afford to have one of his communications team look after it for him. In the past three days there have been three tweets. One celebrating the armed forces, one crowing about being a government in waiting and yesterday announcing his going to speak to a Daily Mirror reporter about how “Our country urgently needs a change in direction“. For once, I agree with him, but this is not being offered by his party.

The @UKLabour account is no better. Plenty about how bad the Tories are and how great Labour are, but nothing to support the many workers now taking action to defend their pay and living standards. As Critical Mass reported yesterday, the official Labour Party line is to treat strikers as irresponsible. Any strike which is effective is to be avoided.

Where does that leave socialists? We stand without hesitation with any worker fighting for better pay and conditions. Be they barristers or baristas, every worker has the right to strike. Every worker has the right to expect their MP to take them seriously. We have always known Tories hate workers showing any independence but, when a party established by the trade union movement turns its back on its roots and its own supporters, then it is time for those interested in justice, fairness and equality to turn their back on that party.