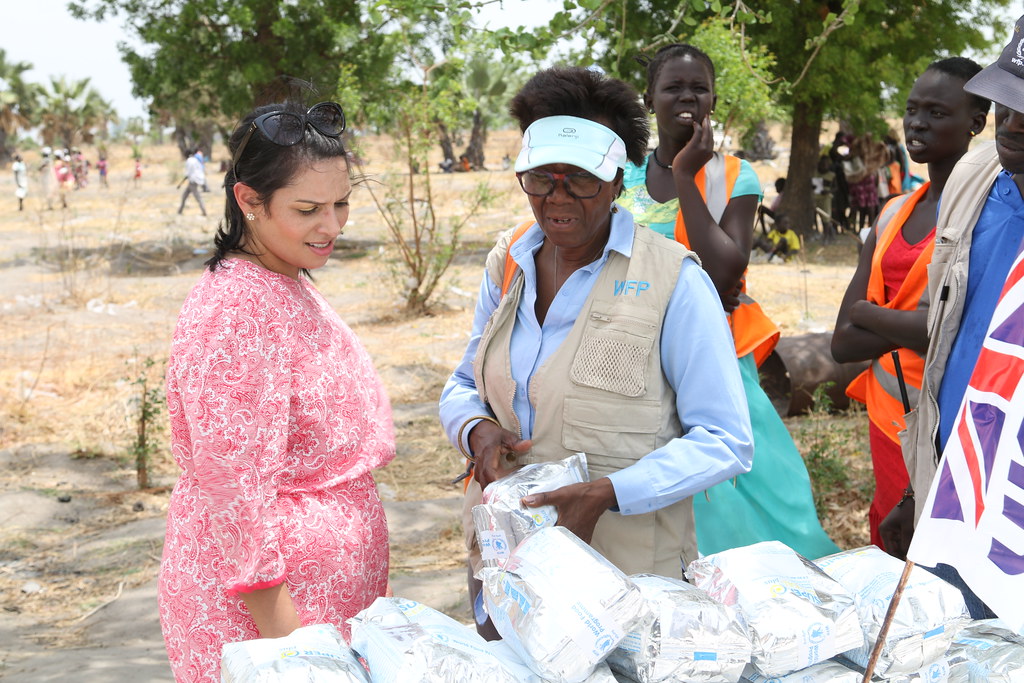 This was Priti Patel in North Sudan. I can just imagine her saying to the locals: "Here are a few bags of rice, now just don't think of trudging thousands of miles and taking a boat to our shores, because we'll let you drown. Okay dear?"

PRITI PATEL outdoes herself again in the callousness stakes with the news that immunity will be given to Border Force officials who turn back migrant boats. This will effectively give them legal protection in the event of migrants drowning.

Just take a moment and think that over: Patel wants it to be just dandy that people might die while Border Force officials do nothing knowing they are safe from prosecution. I would like to think there aren’t any Border Force officials who could stand by and watch migrants drown, but if my life has taught me nothing else, it has unfortunately demonstrated to me that humans can be indescribably cruel to their own.

The provision in the Nationality and Borders Bill, a bill described on the government’s own website as ‘the cornerstone of the government’s New Plan for Immigration, delivering the most comprehensive reform in decades to fix the broken asylum system’ is tucked away in the bill, presumably in the hopes nobody will have noticed it, but it came to light on Wednesday.

Schedule 4A, part A1, paragraph J1 of the bill reads: “A relevant officer is not liable in any criminal or civil proceedings for anything done in the purported performance of functions under this part of this schedule if the court is satisfied that (a) the act was done in good faith, and (b) there were reasonable grounds for doing it.”

But we can take a little hope from the two qualifiers in the above: surely watching someone drown or turning their boat back in the knowledge that people would be at risk cannot be deemed as being done ‘in good faith’ and how can it be considered ‘reasonable’ to do the same knowing that these migrants might drown?

UN convention on the law of the sea

The UN convention on the law of the sea says that “every state” is required to “render assistance to any person found at sea in danger of being lost”. They must then “proceed with all possible speed to the rescue of persons in distress”, so this piece of legislation would be at odds with maritime law.

Of course a judge may indeed find the officers guilty if the unspeakable happened and if it reached a court, but that’s hardly of solace to those who drowned or their families.

Three key objectives of the bill

The Nationality and Borders Bill has three main objectives, as stated on the government’s website:

To remove from the UK those with no right to be here.

This principle is not found in the Refugee Convention

Yet the UN expert on refugees has already warned that this new legislation (currently at committee stage) would break international law. “The bill revolves around the notion that refugees are required to seek asylum in the first safe country they find,” Rossella Pagliuchi-Lor, UNHCR’S representative in the UK, told MPs. “Now to be clear, this principle is not found in the Refugee Convention.”

Who broke the system?

When Priti Patel spoke at the Conservative Party conference last week, she promised to introduce legislation next year for the “biggest overhaul” of the system in “decades”. An asylum system she maintained is “fundamentally broken” and which she aims to make “firm and fair”.

As the Tories have been in power for more than a decade one must wonder just who it is she thinks ‘broke’ the asylum system, and although most of us would agree it is anything but fair, I doubt we’d agree with Patel on what is fair in these circumstances.

This little piece of incredibly harmful legislation which the Tories had hidden away is justifiably receiving condemnation and harsh criticism from just about everyone – MPs, campaigners and a large section of the public alike, as it damn well should.

The Tories keep getting away with making lives more unbearable and I find it unfathomable that we just let them. They push the envelope and we move back. This is not the way. We must resist, with every bit of strength we have left.