Poland Was Not Hit By Russian Missile 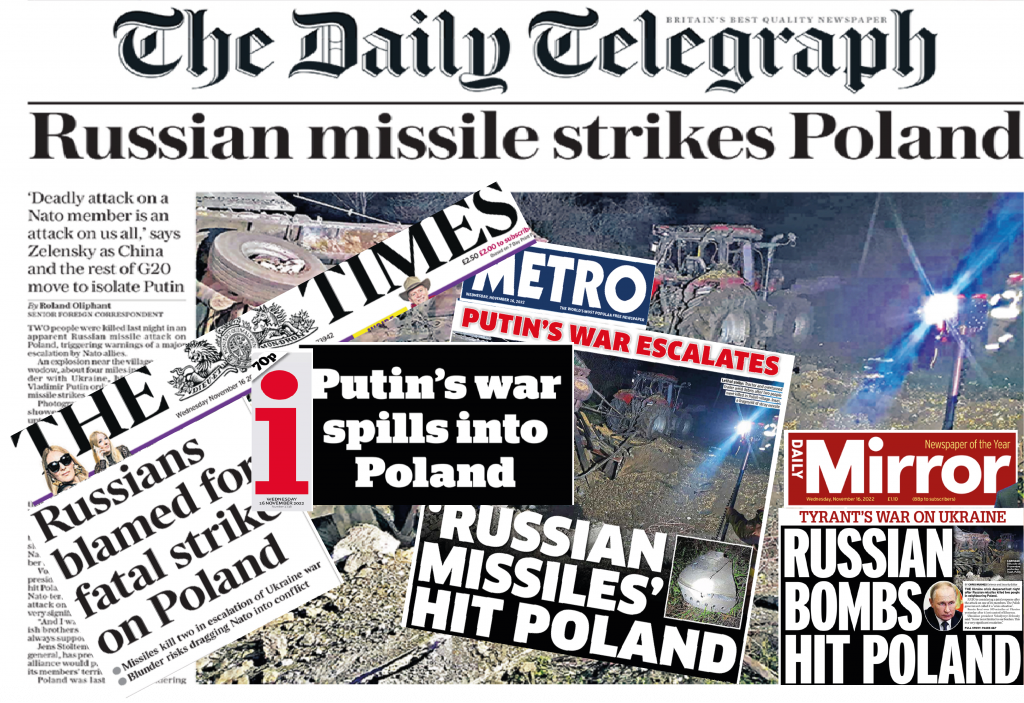 THE British national press spoke with one voice on Wednesday morning as most of their front pages led on one story. Poland had been hit by a Russian missile. The Sun was the exception, finding the interview with Manchester United footballer Cristiano Ronaldo far more important than the world teetering on the brink of nuclear war.

During Tuesday afternoon Russian forces had launched air missile strikes against Kyiv, Khmelnytskyy and Kryvyi Rih. The Ukrainians responded by launching air missile defences. According to Kyrylo Tymoshenko, deputy head of President Zelensky’s office, Russia launched over 90 missiles, of which 73 were shot down.

At around 7 pm reports emerged of a stray Russian missile hitting a farming village, Przewodow, in Poland. Two people were killed. The source of that information was said to be US intelligence. As Russia denied any involvement in the Polish missile attack claiming it was a Ukrainian missile that had malfunctioned, Ukrainian President Volodymyr Zelensky issued a statement saying: “This is a Russian missile attack on collective security. This is a very significant escalation. We must act.“

The flaw in the story

The story was a serious one and deserved to be on the front pages. However, there was one minor point which every newspaper got wrong and which we got right in our Breaking News and that was that the missile was not Russian.

As NATO allies promised to stand with Poland on Tuesday night more information started to emerge. J Andres Gannon who, according to the BBC, is “a security expert at the US Council on Foreign Relations” admitted: “We know Russia has been using S-300 for ground attacks even though it’s an air defence system, but Ukraine also uses them…” And that was the first indication that perhaps Russia was not the villain in this case. By midday Wednesday NATO Chief Jens Stoltenberg was forced to concede that “it was most likely” a Ukrainian air defence missile. Though he qualified that with “Russia bears responsibility for what happened in Poland yesterday.”

Perhaps Russia launching a war against Ukraine in the first place was the precursor to the deaths in Poland, but if NATO and the rest of the Western governments are so concerned about innocent deaths then where are the efforts to secure a peaceful, diplomatic solution? And where is the condemnation of deaths in Syria, Palestine or Ethiopia recently?

The press are, by definition, jingoistic warmongers, but the headlines they chose – we look in vain to see the apology – were designed to do two things: Remind the public that Russia are the bad guys in this conflict and to provide cover for the inevitability of NATO troops being used in this ever-developing conflict. Today’s front pages conveniently moved on from Poland with the only mention being The Telegraph repeating Zelensky’s claim that it was all Russia’s fault. For socialists the position should be a bit clearer. We do not support Russian aggression. We do not support NATO aggression. We do not support imperialist wars no matter what their causes. We support peace. Simple as that.

Please note: this is a slightly amended version of the original in which it might have been inferred we were defending the right of the press to be jingoistic warmongers.

One thought on “Poland Was Not Hit By Russian Missile”