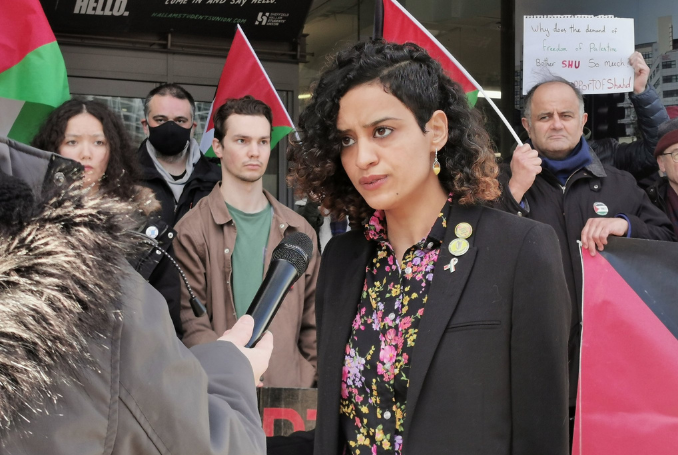 Palestinian activist and Sheffield Hallam University PhD student Shahd Abusalama has been reinstated to her teaching post just one week after her controversial suspension following anonymous allegations of antisemitism against her.

The Palestine Chronicle reports that, in a meeting in which she was represented by her union UCU, the university admitted that there were issues with the way her case had been dealt with.

Shahd has been an outspoken critic of Israel through her blog Palestine From My Eyes. She is a Palestinian writer, artist and activist, born and raised in Jabalia Refugee Camp, Gaza, and now based in the UK. Her PhD research focuses on Palestinian cinema.

Although back at work thanks to a massive public outcry, Shahd is still being investigated and does not know the nature of the complaint or the name of the complainant. She wants the campaign to continue until the investigation is dropped.

In an open letter to Vice Chancellor Christopher Husbands, Tony Greenstein, a leading anti-Zionist Jewish socialist, points out that: “Shahd has been subject for the past 4 years to harassment from the Zionist lobby and its fetid supporters for the fact of being a Palestinian willing to speak out about Israel’s war crimes.”

His letter comes 8 days after Shahd, a PhD student, was suspended on the eve of teaching her first class. Shahd has been in the sights of the Zionist lobby since she made a video in 2019 urging Madonna to boycott the Eurovision Song Contest in Tel Aviv. The video angered the Jewish Chronicle who dug into the young Palestinian’s social media to find evidence of alleged antisemitism.

Her case comes after Bristol-based academic David Miller was sacked following allegations of antisemitism . Professor Miller, a sociologist, was sacked following two internal investigations which found that, whilst his comments did not constitute unlawful speech, they “did not meet the standards of behaviour [we] expect from [our] staff”.

The Jewish Chronicle greeted the news with a headline which read: “Miller’s sacking should be the beginning not the end.” The sacking was welcomed by Labour’s Thangam Debonnaire, MP for Bristol West, who spoke out against Miller at a rally organised by the Union of Jewish Students, alongside Countdown presenter, Rachel Riley.

The success of the Zionist lobby in getting the IHRA declaration accepted as ‘the’ guide to what constitutes antisemitism , including criticism of the State of Israel, has opened up a cultural battleground which threatens freedom of speech in political life and in our campuses.

As Tony Greenstein says in his open letter:

The attacks on Shahd have come about because of her insistence on speaking out against Israeli Apartheid, conclusions both B’Tselem and Human Rights Watch have reached.