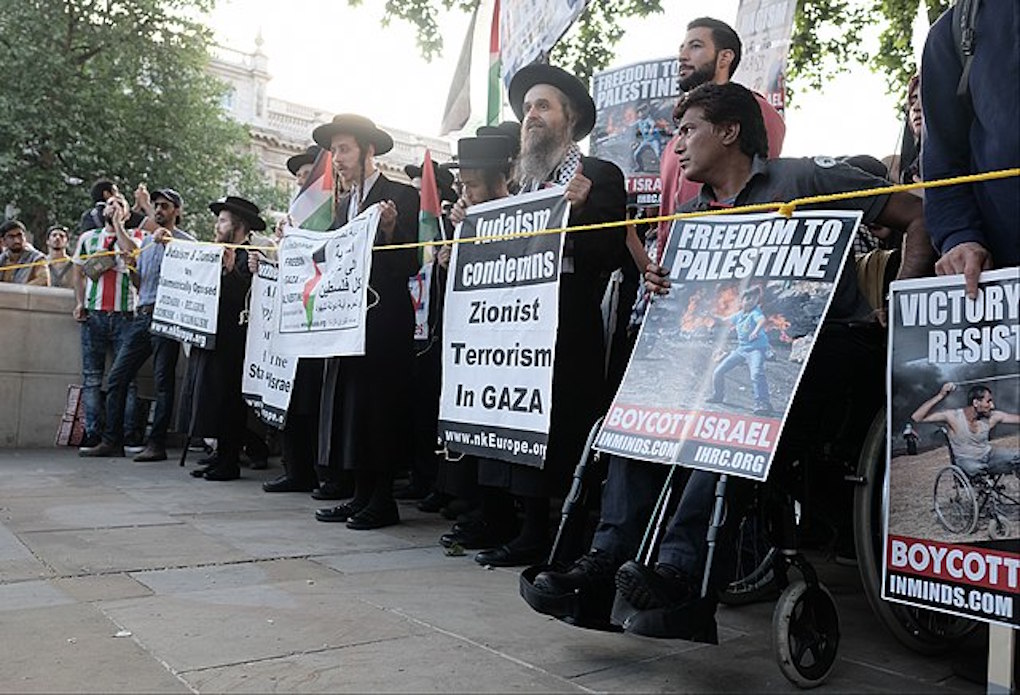 A group of orthodox Jews and Palestinian Solidarity activists in Whitehall at the end of London's Al-Quds march - all united against Israel's killing of unarmed Palestinians. Creative Commons Attribution-Share Alike 2.0

PALESTINIANS are outraged again after warning last week against allowing Israeli settlers to enter al-Aqsa Mosque, yet hundreds of settlers, accompanied by Israeli security forces, stormed the mosque in occupied East Jerusalem’s Old City yesterday. They prayed, raised the Israeli flag, and sang the Israeli national anthem while preventing the call for the night prayer, just as they did on Tuesday.

At least 16 Palestinians were injured and many, many more arrested. The injuries reported included 14 with fractures from rubber-coated bullets and tear gas suffocation, the Sama al-Quds field medical centre told Al Jazeera. About 50 Palestinian males, including the elderly and children, were arrested and escorted out of the compound from Bab al-Silsila (Chain Gate).

The incursions had been encouraged by activists from the extremist settler Temple group who urged Israelis to “celebrate independence on the Temple Mount,” in reference to the Al-Aqsa Mosque, on their social media sites. They called on attendees to wave the Israeli flag and chant the Israeli national anthem.

Israel’s Haaretz newspaper reported Egypt’s endowments minister, Mukhtar Jumaa, as saying: “The waving of Israeli flags and the singing of the Israeli anthem in the al-Aqsa Mosque are a blatant aggression on the mosque and a dangerous provocation in the feelings of Muslims all over the world.

“It serves the extremists and harms international peace and the discourse between religions and cultures.”

At least 600 settlers raided the compound through the Moroccan Gate morning with more expected in the afternoon.

In a statement issued yesterday, Hamas said settler incursions are “a serious escalation and direct provocation, threatening a comprehensive explosion, for which the occupation government bears full responsibility”. And Palestine’s Religious Affairs Minister, Sheikh Hatem Al-Bakri, condemned the incident which he said could only be explained by Israel wanting to spark a religious war they will be able to start, but not stop.

Non-Muslim tourists are permitted to visit the mosque under certain conditions and with the approval of the Waqf, an Islamic trust that manages the mosque’s affairs, but only Muslims are allowed to pray there. Several Palestinian and Arab organisations had warned against just such an incident after a 12-day period in which the government had barred settlers from entering the compound during the final days of Ramadan.

However, at other times during the Muslim holy month of Ramadan, Jewish settlers and occupying forces carried out attacks on Palestinian worshippers at the holy site, leaving many injured and sparking outrage across the world.

Israel celebrated its establishment 74 years ago yesterday in accordance with the Jewish calendar, which it refers to as Independence Day. Palestinians commemorate the day on May 15 as the Nakba or catastrophe – when 750,000 Palestinians were forcibly displaced from historic Palestine.

The office of the United Nations High Commissioner on Human Rights, along with Human Rights Watch, B’Tselem and Amnesty International, has officially condemned Israel as being guilty of apartheid. Professor Michael Lynk, who stepped down on May 1st after six years as ‘Special Rapporteur on the situation of Human Rights in the Palestinian Territories occupied since 1967’, wrote in his final report of the subjugation of Palestinians and their lack of a right of self-determination.

“[An] institutionalised regime of systematic racial oppression and discrimination has been established,” Lynk told the HRC. “Israeli Jews and Palestinian Arabs live their lives under a single regime which differentiates its distribution of rights and benefits [on] the basis of national and ethnic identity, and which ensures the supremacy of one group over, and to the detriment of, the other … This is apartheid.”

Lynk, upon taking up his post six years ago had believed a diplomatic solution the Israeli-Palestinian conflict could be found and that he would only alienate those he wished to bring together if he spoke of apartheid. But over his years in office he realised that was exactly what it is and in late April he said in a statement that ‘permanent occupation’ is a “legal oxymoron” as occupations are understood to be temporary, and occupying powers should safeguard the interests of the ‘protected people’ living under their rule.

Lynk’s successor, Francesca Albanese, has already been slammed by Israeli media outlets as being an “apologist for Hamas terrorism” and with no apparent sense of irony, Hillel C. Neuer, Canadian-born international lawyer who has fought for the human rights of so many people – just not Palestinians – said Ms Albanese’s appointment was “a complete farce”. Israel will continue to block all UN Special Rapporteurs from entering Gaza, as it has done since 2008, but the apartheid nation will never be able to block the reports and eye-witness testimony from coming out and maybe, just maybe, if enough international communities take note and act, we may yet see Israel face the charge of the ‘crime of apartheid’.

I do not hold out a lot of hope for this. We have seen ever-worsening aggression on the part of the settlers and occupation forces while the international community largely stays silent. Meanwhile, Palestinians will be forced to endure this continued aggression against them and the theft of their lands.