Our planet is literally on fire 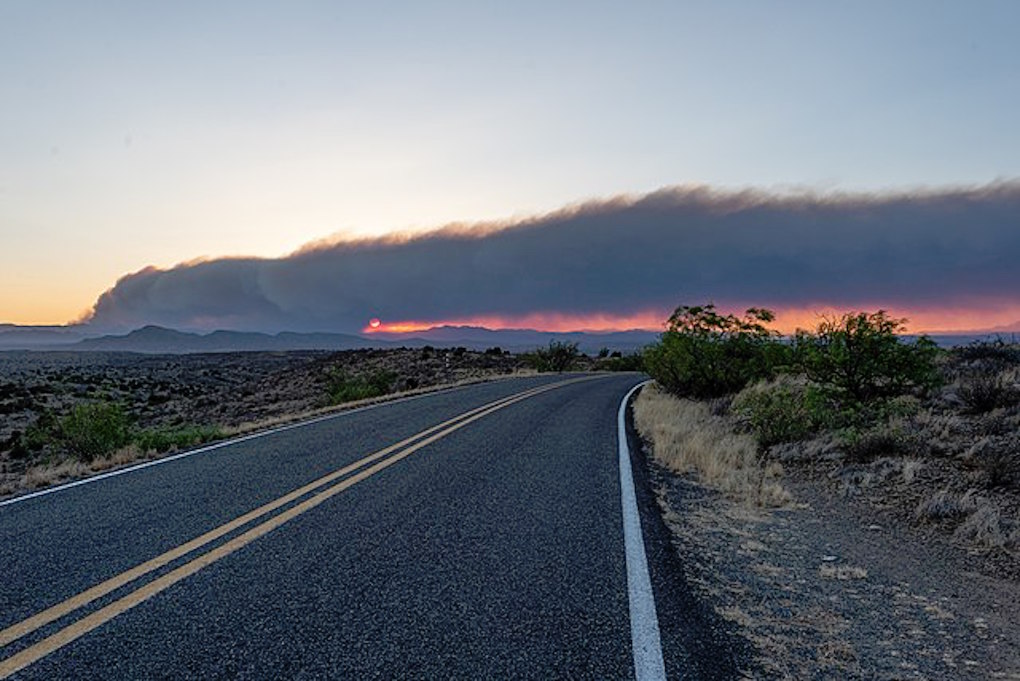 It's happening worldwide. This is the Black Fire in the Gila National Forest viewed at sunset from NM 51W on 16 May 2022. Phot by Matthew.kowal. Creative Commons Attribution-Share Alike 4.0

WHILE in the UK temperatures have dropped since last week’s extreme heat levels, some areas, along with much of Europe are still battling wildfires. Yesterday, fires in Surrey and London were said to be largely under control after firefighters were sent out to battle them. Fire crews in London were also fighting wildfires – with blazes in Rammey Marsh in Enfield, Cranford Park in Hayes and Thamesmead. The London Fire Brigade (LFB) described the incidents as “weather related”.

In Enfield, close to Epping Forest, LFB stated that about 100 firefighters were battling a grass fire which had grown to the size of four football pitches. It is now under control. Also under control is a fire in Hayes where the LFB added 70 firefighters to the scene.

“Firefighters are at the forefront of the climate emergency. The demands of the job are increasing but our resources have been under attack by government cuts for over a decade. 11,500 firefighter jobs have been slashed since 2010.  We have warned of the growing threat for years but our concerns have fallen on deaf ears. The stark reality is that frontline firefighters and local communities have been let down by a combined failure of Chief Fire Officers and politicians to face up to the scale of the challenge. It is simply untrue to say they have not been warned year after year of the risks posed by climate change.”

Spain is well known for high summer temperatures, but even in May the hot air from North Africa  pushed temperatures to 40 degrees in some regions, which is about 10-15 degrees higher than the average May temperatures. They were said to be among the warmest temperatures seen in May in the 21st century. And Spanish citizens have had little respite since with firefighters battling a spate of wildfires around the country. Most of these are now under control except for the blazes in Tenerife.

Emergency officials have deployed approximately 150 teams to deal with these, while authorities have also moved about 585 residents from La Guancha in Tenerife to safety. Fighting the fires was made easier by humidity and weaker winds in the country, but Spain expects a rise in temperature to up to 38 degrees today, which is a grave cause for concern amongst authorities and the public alike.

Meanwhile in France two huge blazes in the south-western region of Gironde were contained after round-the-clock efforts from emergency services, but thousands of acres of damage have been left in their wake.

In Slovenia several villages in the Kras region were evacuated, as thousands of firefighters battled the forest fires and foresters cleared trees in a bid to reduce spread. But cooling off was expected last night and the heat wave is forecast to end tomorrow or Wednesday. In addition to south-western Slovenia, the Environment Agency (ARSO) has issued the highest heat alert level for central and south-eastern Slovenia.

In Greece tourists and locals were evacuated from a popular tourist area on the island of Lesbos, as a mountain forest fire spread, destroying homes in the beachside resort. Some elderly residents could only pack a few belongings before leaving on a bus. Residents were also evacuated from Dadia in northeastern Greece late on Saturday as thick smoke from a fire filtered into the village. Dadia is near the Greek border with Turkey. Around 320 firefighters were dispatched to counter the blazes. Nearly all available firefighting helicopters and aircraft are in use throughout Greece, according to the Civil Defence. Wildfires in Greece have already destroyed around 1,220 acres of woodland.

These fires cannot be ignored or put down to ‘just a hot summer’; it is a hot summer, but we need to recognise this is a result of climate change. Extinction Rebellion pointed to a recent study which found that Europe’s five hottest summers since 1500 have all been in the 21st century. To bring attention to the crisis XR UK launched its ‘Summer Uprising’ which caused major disruption in five cities with the help of five brightly-painted boats. And they are taking action throughout the world – from Chile to Belgium, from Canada to India, and much more besides.

We at Critical Mass stand with Extinction Rebellion and support their fight and would urge everyone to do the same.