No Knighthood for Tony Blair 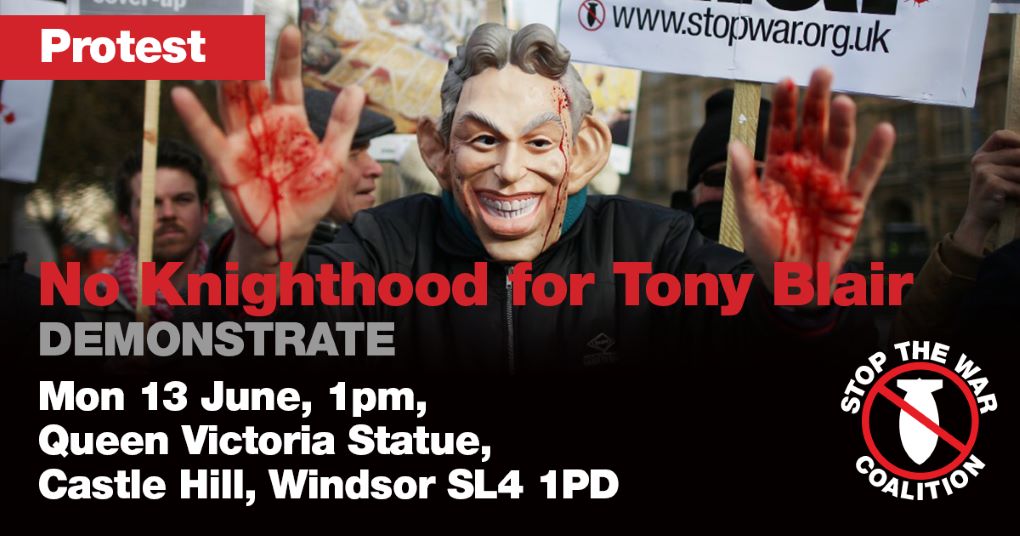 Tony Blair is going to Windsor today to receive his knighthood. And protestors are gathering in Windsor to demand ‘No Knighthood for Tony Blair’. They are objecting to the honouring of a man who dishonoured his country by taking us into an illegal war in Iraq, supported by a ‘dodgy dossier’ which lied about weapons of mass destruction.

The war caused immense suffering for the Iraqi people. It massively destabilised the Middle East and created the conditions for Islamic State to inflict their horrors on the world. This all added to the refugee crisis as millions of people fled from war zones and internal repression.

Later today there will be another protest outside Downing Street against the immoral policy of using Rwanda for the offshore detention of asylum seekers. This has provoked condemnation from the United Nations, Amnesty International and other human rights organisations and refugee charities because it is inhumane and in breach of international law.

Blair’s successors in Starmer’s Labour Party have also objected to the plans, but for all the wrong reasons. Lucy Powell, shadow culture secretary said we needed speedier ways to deport failed asylum seekers. Keith Starmer, shadow prime minister complained that it was “unworkable and extortionate” for taxpayers. So, there you have it. A Labour government would not honour our commitments under the Geneva Convention. It would just find cheaper and more effective ways to evade our duties under international law.

Which brings us back to Blair. In 2004 a civil war in Somalia was in its 13th year and had created a massive refugee crisis. As it is today, neighbouring countries who were ill resourced to deal with the crisis were bearing the highest burden. Tanzania alone had taken over 700,000 refugees.

But Blair was concerned to meet his own target of deporting more failed asylum seekers each year than the number who were granted asylum. He was also worried about Tanzanians pretending to be Somalis in order to get to Britain. So, he wanted to send civil servants to process asylum claims in Tanzania and work with the Tanzanian authorities to identify its citizens who were trying to flee oppression in their own country!

This was bad enough, especially when you consider Tanzania’s human rights record. But plans went further. After press reports that Blair was offering millions in foreign aid to Tanzania if it would accept failed asylum seekers from Britain, Tanzania rejected that idea. 18 years later Rwanda has said yes to similar proposals from Johnson and Patel.

In 2006, predating Theresa May’s ‘Hostile Environment’, Blair was proposing to deport people who could not prove their UK citizenship on release from prison unless they could demonstrate a specific threat to their safety. He said,

It did not matter how dangerous the situation was in their country of origin, unless they could prove they were personally at risk, people would be deported regardless. Blair boasted that he was deporting people to Iraq and Afghanistan. Even Sir Andrew Green, from Migrationwatch UK, said he was “surprised” by Mr Blair’s words.

Given the unprincipled support for dictators like Kazakhstan’s Nursultan Nazarbayev, offered by Blair after he left Parliament, we should not be surprised by anything Blair has said or done. It was not for nothing that Margaret Thatcher described him as her greatest achievement. I doubt anybody will be in a hurry to take similar credit for Blair wannabe, Starmer, any time soon. Despite his slavish adoption of New Labour’s neoliberal policies and rejection of the democratic socialism he claimed in order to become leader, Starmer is more Blair-lite than Blairite. He will struggle to win one election, never mind three.

Building a socialist alternative has never been more necessary or more challenging. But next week we welcome National Refugee Week. Critical Mass will be bringing you news of any local action we hear about. So please share if you have anything planned and let us know how your event turned out. Solidarity with refugees is a keystone issue and a reliable way to link up with other socialists.