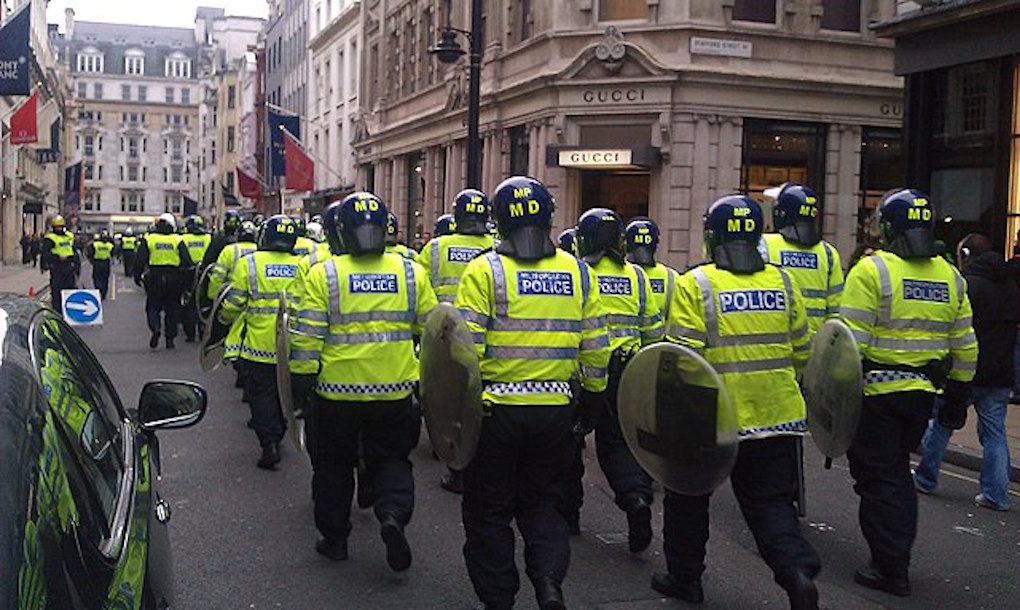 Is this going to be a common sight on our streets? Protest outside Fortnum and Mason, London. Photo by Weldon Kennedy. Creative Commons Attribution 2.0

WHILE most were focused on Liz Truss’s behaviour on Tuesday, the Public Order Bill continued its passage through the House of Commons where it was passed by 276 votes to 231, and now has to go to the House of Lords before it becomes law.

With so many things to concern us we’re sure the Tories are pleased it’s not getting the attention it deserves, because they have just voted to strip away many of our rights.

First announced by Prince Charles in the Queen’s Speech in May, the Bill is said by its proponents to be necessary to avoid disruption to services caused by protestors such as Extinction Rebellion and Just Stop Oil. The two groups have been tenacious in their attempts to bring the climate crisis to the attention of the public and the media, a media which has been consistent only in its attempts to ignore the protests until they dared to throw two tins of soup on the glass covering Van Gogh’s ‘Sunflowers’. Although many were quick to call it a ‘stupid act of vandalism’ and that it served no purpose, it most certainly did serve the purpose of garnering media attention, serving to prove the point that in this society things are more important than people.

This new Bill could stop such protests and, if the protestors defy the Bill as seems likely, they will be subject to much tougher sentences. A coalition including Amnesty International, Greenpeace, the TUC and Unison have warned that the Bill would have a “chilling effect on our ability to stand up to power”.

It’s not just the rights of protestors which are threatened, it’s everybody. The Public Order Bill would allow police to “stop any person or vehicle and make any search the constable thinks fit whether or not the constable has any grounds for suspecting that the person or vehicle is carrying a prohibited object”, with a ‘prohibited object’ defined as those which could be used for ‘locking on’ and other forms of protest.

Other measures proposed include giving courts the power to issue Serious Disruption Prevention Orders (SDPOs), which can ban individuals from attending protests. Amnesty International has said such measures go further than similar laws in Russia, as they wouldn’t even require a conviction.

Strikes are also under threat, with Clause 6 of the bill making it an offence to interfere to obstruct major transport works, and Clause 7 makes it an offence to “interfere with the use or operation of key national infrastructure in England and Wales”. This could be used to clamp down on things like rail strikes.

But do not think it is protestors and strikers who will solely be affected. These new laws could be used against any one of us at any time. If passed, dissent will not be tolerated. We must act now.

BREAKING NEWS: the Government is Breaking.

Yesterday the Home Secretary resigned. Suella Braverman left after ‘accidently’ breaching the ministerial code by sending an official document to another MP using her personal email account. This way she gets to leave the sinking ship and attack Truss in a resignation letter that as good as says the PM should have resigned already.

Her replacement is Grant Shapps. So now we have a Home Secretary in charge of law and order who, using a false identity, wrote and sold a £400 booklet on the internet on how to run a Ponzi scheme while he was an MP.

Later there were chaotic scenes in the Commons during the debate on Labour’s anti-fracking motion, after climate minister, Graham Stuart announced, in contradiction to an earlier statement by Truss, “Quite clearly this is not a confidence vote.” The Whips office had already announced a three line whip on Tory MPs to vote for the Government on pain of expulsion.

During the vote there were eyewitness accounts of shouting and bullying in the Tory lobby. Therese Coffey has denied ‘manhandling’ a Tory MP. Truss was seen arguing with Chief Whip Wendy Morton who, in the confusion, forgot to whip herself and left the lobby without voting.

Despite earlier reports, neither the Chief Whip nor her deputy, Craig Whittaker have resigned. Or, if ITV News has it right, they did resign and then were persuaded to withdraw their resignations … for now.