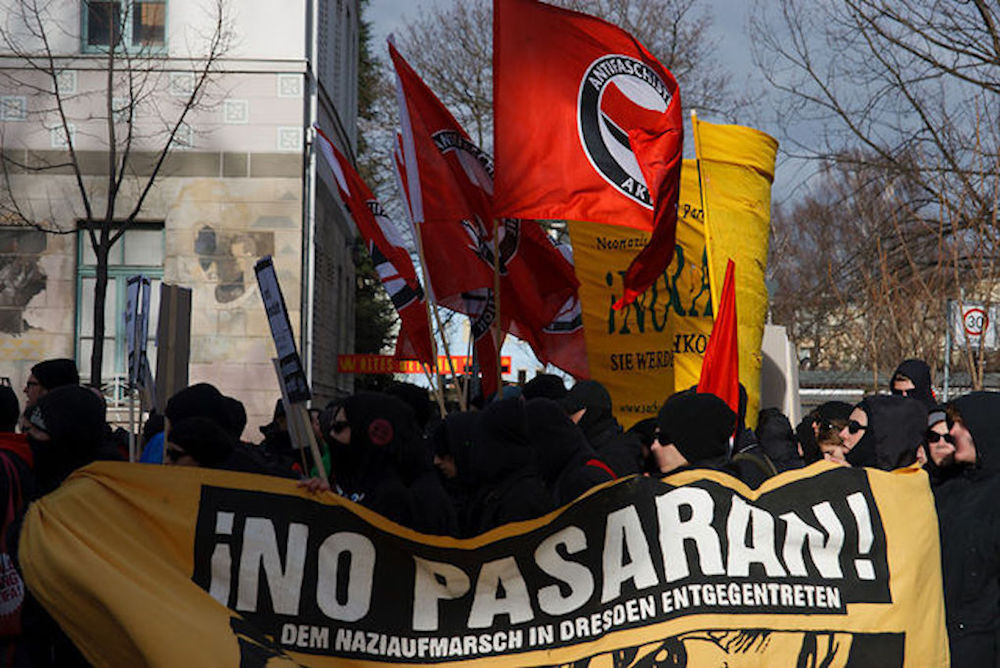 MANY of you may have missed this bit of news with all that is flooding in from the war in Ukraine, but it is a timely reminder, given what we are seeing of the neo-Nazis in Ukraine, of how one country is doing its best to get it right with neo-Nazi laws in direct comparison to another which is not.

19-year-old Spaniard, Isabelle Medina Peralta, was stopped from entering Germany late last week because she was carrying a flag with a swastika, a swastika-themed keychain and a copy of Adolf Hitler’s Mein Kampf in her luggage. She tried to tell police she was only carrying the items because she was a student of history and interested in the Nazi era, but she is known to be one of the leaders of the Bastión Frontal, a neo-Nazi organisation which originated in the San Blas district of Madrid. However, the possession of Nazi material is banned in Germany, and so she was refused entry.

Around this time last year Peralta gave a speech in her country at a memorial service for the Division Azul (Blue Division), the Spaniards who fought under Adolf Hitler during World War II, where she said,  “Our highest duty is to fight for Spain, to fight for Europe, now weak and being destroyed by the enemy.” Peralta has often referred to Jews as being the ‘enemy’. And in November last year, the Public Prosecutor’s Office in Madrid filed a complaint against her for “calling” for violence against Moroccan and Muslim migrants in front of the Moroccan embassy in Madrid in May of that year.

While the far right and fascists are becoming more widespread in Spain, and elsewhere, German citizens and authorities are working to change the mindset of these extremists as the authorities believe that fascist organisations could pose an existential threat. They remember how Hitler used the electoral system to gain influence until he had the power to completely abolish the country’s democracy.

There are about 30,000 far right extremists in Germany and, while neo-Nazis are permitted to march, rules prevent them from carrying shields, batons and helmets – such as the neo-Nazis did in Charlottesville and elsewhere in the US. Openly anti-Semitic chants are not permitted, and German police will step in and detain individuals who may be chanting. These marches are generally met with counter-protestors whose numbers far outweigh the neo-Nazis, and there are many groups within Germany who raise money to help get right wing extremists out of the life and ‘re-educate’ them

German law prohibits publicly denying the Holocaust and the dissemination of Nazi propaganda, both online and off. This includes sharing images such as swastikas, wearing an SS uniform and making statements in support of Hitler. It also places strict rules on how social media companies must moderate and report hate speech and threats. These hate-speech laws were tightened two years ago after three far-right terror attacks in 2019 and early 2020 – the assassination of the pro-refugee politician Walter Lübcke; shootings outside a synagogue in the town of Halle, on Yom Kippur; and a mass shooting in Hanau, as, specifically with the latter two, the killers had been radicalised on the internet.

While Holocaust denial is punishable by a sentence of up to five years, Germans can face up to three years in prison for ‘approving of, glorifying or justifying’ Nazi rule. There are many sections to these laws and they cover all areas of hate speech, threats, Holocaust denial and more. The laws, however, have raised concerns from both left and right-wing political parties in Germany, as well as human rights advocates who are concerned about the people’s right to speak freely.

It’s always difficult to know where to draw the line, regarding censorship, between freedom of speech and hate speech, because we do not all agree on what hate speech is. I would hope though we could all agree that the shutting down of neo-Nazis is a good thing, but in most Western countries we are focused on our freedoms and think everybody has a right to say what they wish. There may be consequences to what we say, yes, but we have a right to say it, and this can too easily lead to radicalisation of those who are perhaps more susceptible and more prone to ‘othering’. The question on what should be banned is a difficult one, but I think Germany has it right. Their laws are rooted in their history and national identity.

The German people know better than most what can happen if such hatred of ‘others’ is allowed to prevail. They have taken lessons from their history and personally I think it is a shame other countries have not.