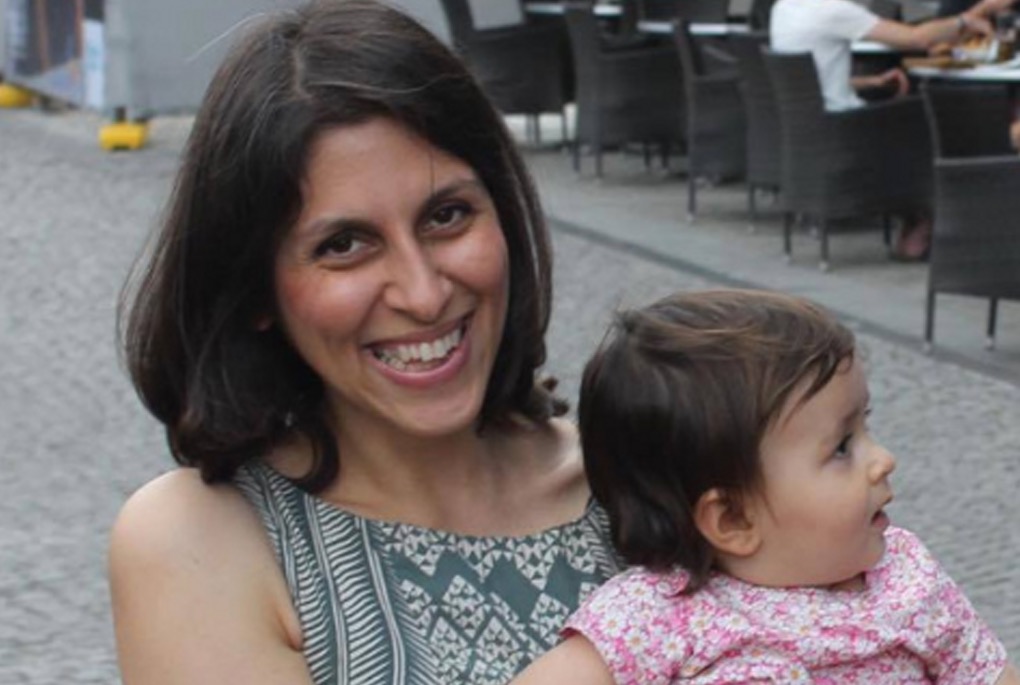 Nazanin and her daughter. Image courtesy of Amnesty International

There are people in parts of the world who require external help to simply stay alive. Whole regions destroyed, infrastructure gone, walking the very thin line between life and death.

Do you think those people should have to rely on the largesse of individuals, corporations and state governments for their survival? Perhaps you think constant, structured, development and support from the world community is a better way to help?

Whatever your thoughts and the approach you’d take, I’m sure we’d all agree that when humanity is in need, a positive response of some sort should be offered.

Unfortunately, there are those among us who really are impostors! They walk the planet like human beings but are hollowed out, soulless avatars, not caring for anybody, unable to recognise the simple humanity the rest of us share. The most unfortunate aspect of this is there are many of these replicants in powerful positions in powerful administrations of powerful states.

The World as Community

Thankfully, there are organisations, both non-governmental and nation-state, that understand that, even if you are a ghoul that has no empathy for others who are suffering, it is beneficial to all to provide help and assistance to those in desperate need.

There are humanitarian focused groups such as the International Federation of Red Cross and Red Crescent Societies  (IFRC), a worldwide humanitarian aid organisation that seeks to save and improve the lives of vulnerable people suffering from disasters and does so with impartiality. They don’t help based on nationality or race; gender or religious beliefs or even class and political opinions. For them, such categorisations do not apply.

Then there’s an organisation you may be all too familiar with, the World Health Organisation (WHO). It provides a very broad range of assistance. From monitoring public health risks, coordinating responses to health emergencies, promoting human health and well being, as well as providing technical assistance to countries.

An example of a nation-state showing empathy is Japan’s International Cooperation Agency (JICA). It is a governmental agency that is chartered with assisting economic and social growth in developing countries and the promotion of international cooperation.

Every Community has its Superstars

You, empathetic readers, will probably agree that any individual working within any of these organisations is likely to be a person interested in helping people who are in the worst of situations. They will be people who do not care what nation, race, religion or colour your skin is, right?

Meet one of these Superstars

Now, imagine meeting a person who has worked for all three of these organisations. This is someone who has clearly decided that a life of service, helping those in the worst of conditions, suffering like nothing we can imagine, is their way to make a difference and help. I am sure there are many who meet these criteria but let me introduce you to one, in particular, Nazanin Zaghari-Ratcliffe.

Yes, I’m sure you know who I mean. Let’s just take a minute to know a little something about Nazanin, shall we?

The Beginings of Awesome!

Born and raised in Tehran she studied English literature at the University of Tehran, before becoming an English teacher. Following the 2003 Bam earthquake that struck southeastern Iran killing over 26,000 people and injuring up to 30,000, she worked as a translator in the relief effort for the Japan International Cooperation Agency.

Later, Nazanin worked for the International Federation of Red Cross and Red Crescent Societies, before moving to the World Health Organisation as a communications officer

Whilst travelling on holiday with her baby daughter, Gabriella, to visit family for the Iranian New Year (17 March 2016), Nazanin was arrested by members of Iran’s Revolutionary Guard at the Imam Khomeini Airport as they were about to board a flight back home to the UK.

Nazanin was not initially charged, and there seemed to be no charges or statement forthcoming from Tehran. Held in solitary confinement and interrogated whilst allowed only very limited access to legal representatives, after 4 months of confinement, Tehran eventually charged Nazanin.

When there is little or no evidence to back up an authoritarian state’s claims, they turn to the vague and the broad. This allows condemnation of the ‘guilty’ party and the opportunity to be slippery when legal representation gets the chance to push back. The nebulous and false charge? ‘Plotting to topple the Iranian government’.

Of course, this was refuted by Nazanin and her family, her legal representation and even Thomson Reuters Foundation, the charity she worked for at the time of her arrest, and they continue to do so to this day.

Nazanin and her family have been cruelly treated at every stage of her ordeal. The simple fact of being incarcerated and innocent, the health issues both physical and mental that she has had to face in terrible conditions, the hopes of release raised only to be pulled out from under her, all of these tell the tale of an innocent person being used by nation-states in a game over money and power.

That story of the UK and US intervention in Iran is a story for another day, one which we will discuss. Here, as in real life, the focus needs to remain on Nazanin and what needs to be done to help this woman, her child, her husband and her family.

No matter how incompetent they may be, pressure must be kept on those responsible and charged with their public duties. The incompetence is derived from how little they care. The pressure will make them care. Sure, they’ll care primarily for themselves, their position and their power, but if it gets the result necessary, I’m ok with that as we all should be.

Yes, they show all the empathy of Brett Easton Ellis’  Patrick Bateman and as much consideration as plantation masters did for their slaves but they need to be held to account. They love the power they crave, so let’s make them use it to release a family from the hell they have lived for over 2,000 days!

As if to go out of their way to prove the point, the UK state extended its appalling treatment of the Zaghari-Ratcliffe family.

In a desperate attempt to keep the focus of Nazanin’s case front and centre, and to try to get a government with no successful strategy to take a new approach at securing Nazanin’s release, Richard, Nazanin’s devoted husband, started a second hunger strike on Sunday (24 Oct 2021)

Not content with a family, including their six-year-old daughter, Gabriella, living in purgatory, the state tried to remove Richard from his lawful protest from outside the Foreign, Commonwealth & Development Office (FCDO) in the early hours of Monday morning. An attempt to perhaps try to remove the last vestige of a family’s heroic efforts to save an innocent woman.

I am not advocating dog-piling a government minister. However, letting them know they have failed badly at their entire job and specifically with regards to Nazanin is not only acceptable but our duty.

Let Foreign Secretary, Liz Truss know she can do something to address these failings. She has a nice title and enormous power, so she needs to get on and use it. Now!

She can be contacted at the foreign office at fcdo.correspondence@fcdo.gov.uk

directly at her parliamentary address elizabeth.truss.mp@parliament.uk

New to Direct Pressure? We’ve Got You Covered!

If you are new to attempting to deal with our elected and accountable representatives, it can be made a lot simpler; TheyWorkForYou helps to navigate the simplest route to holding power to account.

To find Liz Truss or your local MP, follow this link and follow the instructions to contact them. Let them know your disgust and your demand they secure Nazanin’s release, reuniting their family.

For the latest on the ‘debate’ in parliament on Nazanin, TheyWorkForYou’s site is invaluable. This link will take you straight to what is being discussed.

Other ways to Keep MPs on task & honest.

You can help to keep this story front and centre by using the Facebook group to free Nazanin. The more Nazanin and Richards’s names and plight trends, the more mainstream media are likely to cover it.

You could also go to the likes of the change.org petition site. Lend your name to the wealth of others that can clearly see this travesty. Keep up the weight of public opinion to ensure the involvement of the UK government.

Perhaps the most visible and effective group for applying pressure is Amnesty International. Go to Amnesty’s Help get Nazanin home project and show your support there.

I have alluded to how badly this family has been represented by their government, but which government are we talking of? It is now a government that is headed by the buffoon that was the Foreign Secretary for pivotal moments of Nazanin’s case. The government of Boris Johnson.

Whilst we can point to many many points where Johnson has been incompetent or given the appearance of being corrupt, his crass stupidity has never been more demonstrably consequential as that displayed during his ‘support’ of Nazanin’s case.

His is a story that is necessary to lay bare. It is worth us all fully understanding the sort of entitled and arrogant individual that has power over us and the real-life consequences that even the best of us can fall prey to because of them. Stay tuned for that.

To paraphrase another of the incompetent, corrupt and racist, elitist club members, Donald Trump, Bullingdon has not sent us its best.

The story of Nazanin Zaghari-Ratcliffe’s and her family’s struggle since her false arrest and imprisonment is not easy or enjoyable to write just as it is awful to read.

The story of a wonderful wife, mother and daughter who devotes herself to organisations helping those less fortunate than she is, no matter where in the world the help is needed, Nazanin wants to be part of bringing that relief. Countries corrupted by imperialism, greed and ‘might-making-right’.

Nazanin is the best of us

Nazanin deserves my best efforts to help her and her family in any way I can. Help me to help them. Use one of the resources in the piece. Send an email, sign a petition, lobby your MP.

Help me to help Nazanin, please! Help me to get to write that story I think you’d rather be reading!