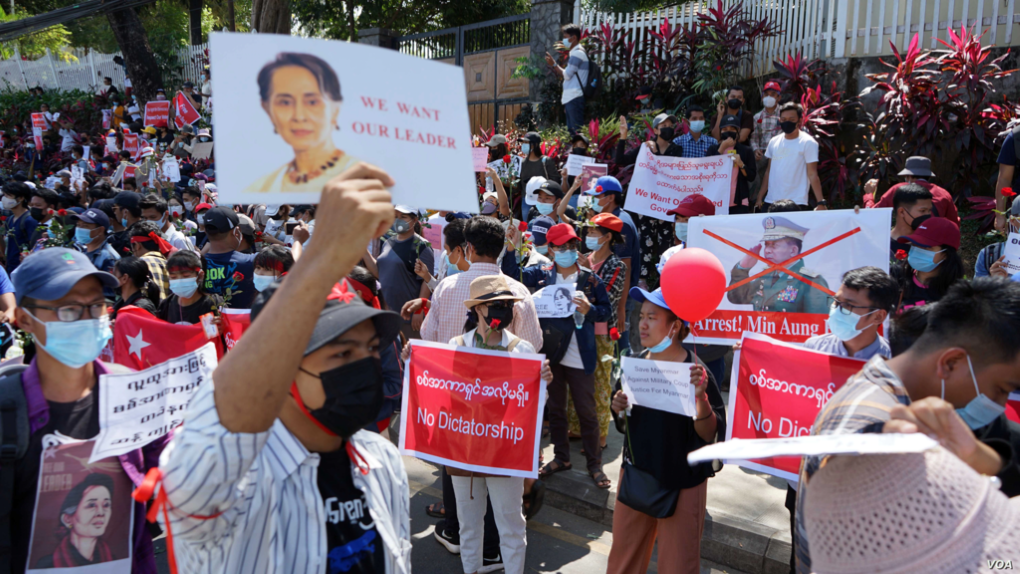 The junta that has ruled Myanmar since the military coup in February this year committed a fresh atrocity on Christmas Eve. Thirty eight men women and children were killed and the bodies burned, including two aid workers from Save The Children. The deaths of the aid workers has put Myanmar back in the news spotlight but this is just the latest atrocity in a brutal crackdown on dissent that has been going on since February 1st when the military launched their coup.

Last year’s elections, held on November 8th, resulted in a landslide victory for Aung San Suu Kyi and her National League for Democracy (NLD), who won 396 out of 476 seats up for election in both houses of the Myanmar legislature. Another 166 seats are reserved for the military. The military also fielded its own candidates in the election, standing for the Union Solidarity and Development Party. The humiliation of the USDP, who came second with a total of 34 seats helped trigger the coup on February 1st this year, the day the new parliament was due to convene.

During the coup leading NLD members, including Aung San Suu Kyi, were arrested and other politicians were expelled from the capital. The coup met with massive resistance. There were widespread demonstration and strikes that were repressed by the military. Tens of thousands were arrested and many died in custody. Some were tortured.

Even before the coup some areas of Myanmar were gripped by insurgency. There are many ethnic minorities in Myanmar, apart from the the Rohingya who were subject to genocidal assaults from the military in 2017. All have experienced discrimination both under the NLD government and the previous military dictatorship that ruled for forty nine years until 2011. Since the coup insurgency has increased and the military have responded with massacres like the one on Christmas Eve, killing civilians when insurgents withdraw. Earlier this year one activist estimated that at least 1000 people had been killed by the military since the coup.

UNICEF has condemned the latest atrocity. The United Nations has called for a ceasefire. China is coming to an accommodation with the regime and refused to condemn the coup, voting against a resolution at the UN. Meanwhile the US imposes sanctions, not for human rights abuses, but because it does not trust Myanmar after its rapprochement with China.

Big power politics will do nothing for the people of Myanmar. Aung San Suu Kyi has been found guilty of crimes against the state and faces at least four years in prison. Other charges are pending. Celebrities like Paing Takhon, a model and actor with millions of fans, have received similar jail sentences for protesting against the coup.

The one bright spot in this dismal tale is that, by being an equal opportunities oppressor, the Myanmar military are inadvertently forging links between the Bamar majority and the ethnic minorities in the forefront of the resistance. Divide and rule only works if you can exploit divisions. Unity is strength and unity built out of shared oppression has more chance of seeing off the military dictatorship than ineffectual handwringing by international bodies.